Kuroda Dazzles in Rout of the Giants

Share All sharing options for: Kuroda Dazzles in Rout of the Giants

The Dodgers beat the Giants 10-3 on Friday in a true team effort. Hiroki Kuroda got the win, pitching 8 innings of 3 hit ball, while allowing 2 runs on 0 walks and 5 strikeouts. Kuroda only threw 86 pitches in the outing, and retired 19 consecutive batters strecthing from the second inning to the eighth inning.

Kuroda gave up his first run in the second inning, allowing a single by Bengie Molina and a double by Juan Uribe. Molina scored on a groundout by Nate Schierholtz that started his conseective out run. The only other run he allowed was in the eighth inning when John Bowker tripled on a fly ball to "Triples Alley" and then scored on a Ryan Rohlinger groundout. Kuroda came out after the eigth inning and was replaced by Ramon Troncoso, who allowed one run before finishing the game. After the game Kuroda said:

"I would like to finish as strong as I did last year. We're in first place and Colorado is really close, and my thought is to pitch my game and contribute to the team so we can win a championship and the World Series. I've gone through a lot, the DL twice, I got hit in the head for the first time in 13 years of professional baseball. I'd like to finish really strong."

But it definitely wasn't all Kuroda, the offense was clicking as well. The Dodgers scored the first two runs of the game in the first inning when James Loney cashed in two Dodger singles on a double to right center. But no more runs came across until the sixth inning, when Casey Blake (in his first game back after sitting out the previous five) smacked a two-run homerun to left field, putting the Dodgers up 4-1. The game was broken open in the seventh when the Dodgers tacked on five more runs. Four straight batters reached base to start the inning, and following a sacrifice fly by Loney, a single by Blake, and a double by Russell Martin the Dodgers were up 9-1. The offense capped it off with another run in the eigth inning when Matt Kemp hit a double to score Juan Pierre and give th Dodgers 10 runs on the night.

On offense six of the eight starting position players reached base muliple times, with only Rafael Furcal and Ronnie Belliard reaching once. Ethier, Kemp, and Blake all scored twice and Blake and Loney each had three RBI's.

Here's the win probability chart for the game: 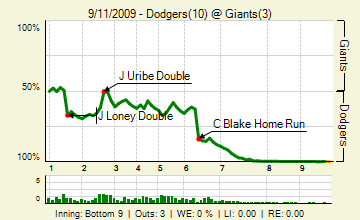 The win kept the Dodgers 2 games ahead of the surging Rockies (currently on an eight game winning streak)  and left the Giants 7.5 games back in the NL West. The Dodgers are currently tied with the Cardinals for the best record in the National League and 2.5 games ahead of the Phillies. Tommorow Vicente Padilla (10-6, 4.63) takes on Jonathan Sanchez (6-11, 4.03) at 6:05 PM.