Brad Penny stymied the Dodgers on Sunday, pitching 7 innings and allowing only 2 runs on 5 hits, 2 walks, and 2 strikeouts en route to a Giants 7-2 win.

Chad Billingsley had a 6/0 K/BB ratio but got knocked around and only lasted 4 innings, allowing 8 hits and 3 runs. BIllingsley gave up doubles to Nate Schierholtz and Travis Ishikawa and a two run homerun to Juan Uribe.

Jeff Weaver relieved Billingsley and was awful, allowing 4 runs in 1.1 innings. Weaver allowed 5 hits and had a walk and 2 strikeouts. The rest of the bullpen didn't give up any earned runs, but Ronald Belisario relieved Weaver with the bases loaded and let all three runs score. But Scott Elbert, Ramon Troncoso, and Charlie Haeger combined to pitch 2.1 innings and recorded 4 strikeouts without allowing a baserunner.

The offense was unable to score in every inning except the 7th, when Russell Martin hit a two run homerun off of Penny. The homer was Martin's sixth of the season. Other than that the Dodgers only scattered four singles and were 0-5 with RISP. James Loney (who walked twice) was the only Dodger to reach base safely more than once in the game. Neither Manny Ramirez nor Orlando Hudson started the game, but Hudson did pinch hit.

Billingsley is now 0-4 with a 5.67 ERA in his last five starts and his ERA is up to a season high 3.99. Billingsley seems as puzzled by his struggles as everyone else:

I don't even know how to explain it. It's frustrating... I don't think it's necessarily mechanical. I have to keep the ball down in the zone. I'm trying to figure something out and get this thing turned around. My cutter got hit today. It was spinning out of my hand and not moving much. That's what they were hitting.

It's not like I'm trying to throw every pitch belt-high. Maybe it's release point. You can look at video all you want, I know what I'm doing. Trying to correct it, sometimes it doesn't happen. I'm trying to get the rhythm back.

When you're not playing well, yeah, it's getting to you. It's frustrating. I'm battling and going out there and hoping that today is the day to turn this thing around. When I'm out on the mound, I want to get after it. I'm not going out there with doubts.

Here's the win probability chart for the game. It was all Giants: 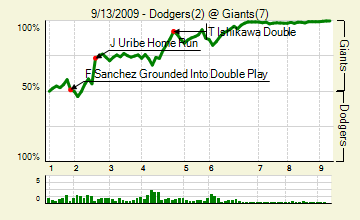