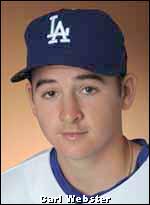 The Rookie Arizona Summer League roster basically consisted of players drafted low in 2008 or 2009 with some foreign free agents thrown in. Some of these players will never play again, or may play one more year and then get on with their lives but hopefully we have a nugget or two learning how to deal with professional baseball. This is just a statistical overview of the accomplishments. If you are a hitter and you have repeated this league, and you are over 20 years old, and have yet to crack a .200 batting average you might consider going back to college. I'm talking to you Melvin Ray.

For the roster breakdown of notable players, click on the jump.

Nick Akins: was by far the best hitter on the team with a line of .333/.397//658/1.055 which would have landed him 3rd in the league in OPS for players with over 100 at bats. He only had 136 plate appearances because he was promoted to Ogden where he continued to have success, just not at the same rate. Akins was drafted in the 19th round in 2009 and was born 12/25/1987. This Los Angeles Native played mostly LF/RF this year. The Christmas Birthday boy was born in 87 so at 21 he's got to get going and make his move. I doubt he's a prospect but he was by far the best hitter on the team, and in the league.

The Angels had two 17 year olds in the league that they drafted in the first round. Mike Trout who posted a .925 OPS and Randall Grichuk who posted a .903 OPS. I'm just mentioning them because our 7th round pick Jonathan Garcia is also only 17 (11/11/91), and he posted a .302/.362/..500/.862 OPS playing RF and CF. He was drafted out of the Puerto Rico Academy and I have a good feeling about him. Garcia was not only the 2nd best hitter on the team he was the youngest player on the team with Jeffrey Hunt being about 9 months older. By contrast he is four years younger then the best hitter on the team. Which player do you think has a better chance of being a Dodger? This is what Kensai had to say about Garcia back in August:

Jonathan Garcia|OF|AZL|18-Before the draft, the word on him was that he had big talent but couldn't show it in the games. Considering that, it shocks me that he has a .292/.355/.460/.815 line through 34 games in the Arizona League. His peripherals aren't great, but considering how raw he's supposed to be, it's promising.

Others of note. Jeffrey Hunt was highly touted out of HS and we drafted him in the 15th round. The left handed hitting 3rd baseman has excellent size at 6'2 190 but failed in his first go round in professional baseball. The stats say he was over matched, we will let him play another year before we make any judgments. Stetson Banks has one of the best names in our system but may not have many skills. The light hitting Banks played mostly CF but also played nine games at 2nd base. Michael Pericht was drafted in the 16th round this year and was born 5/23/88. This catcher can't hit but he can take a walk. His line of .211/.345/.394 has one of bigger splits you will see between average and OBP. With 18 walks in only 139 plate appearances he was getting on base. His OPS of .740 was not embarrassing for guy who had a .211 batting average. Maybe he can blossom into the next AJ Ellis.

Tae-Hyeok Nam didn't play much and here is the blurb on his signing. Born 3/1/3/91 he's just a baby but he only got three at bats for AZL.

Not much of interest on the offensive front. Casio Grider barely lost out to Stetson Banks for best name. Now we just need a 2nd baseman name Timex and we will have a timely keystone combination in the low minors. At this point I don't consider the other catchers Vasquez or Taverez anything of value.

Danny Danielson is one of the few players on this roster who was drafted in 2007. This was his 3rd season on the Rookie League roster but in the previous two seasons he had only thrown 30 innings combined. In 2009 he was the workhorse of the AZL team with 61.1 innings pitched. His .308 ERA was 9th in the league, and his 77 strikeouts (11.3 K Rate) ranked 2nd. With a walk rate of only 1.8 Danielson has the solid combination of a strikeout pitch with good control. Even though this was his 3rd year in the league he's still only 20 years old having been born on 12/12/88. At 6'4 and 220 this big RH could be ready to make a move up the prospect list next year.

Here is what Kensai had to say about Danielson back in August:

Danny Danielson|RHP|AZL|20-This kid could make waves in the near future. He currently has a 3.51 ERA and a 2.42 FIP, along with 12.10 K/9 and 1.40 BB/9. Like i've said multiple times before, raw performance in complex leagues don't impress me, but i've seen enough of him where I like his chances in Ogden next year. One to follow for sure.

Other Pitchers of Note:

Carlos Frias was born 11/13/89 so he's a full year younger then Danielson and maybe even a better prospect. While Danielson is 6'4 220, Frias is 6'4 170 so a Ramon Martinez type of body. Now if he only had Ramon's change up to go with it. He was just behind Danielson in inning pitched with 61, his K Rate was at 9.9 but his walk rate was 3.5 which helped move his ERA above 4.00. Frias was signed out of the Dominican in early 2008 so consider him as you would a 2008 draftee.

Roberto Feliciano is a six foot 200 hundred pound southpaw and is destined for relief work. Drafted in the 24th round in 2008, Felciano has been impressive in a limited amount of innings. Born 8/16/1990 he just turned 19 years old and only pitched 24 innings for the AZL team before getting promoted to Odgen. While in the AZL he struck out 27 and posted a sub 1.00 WHIP (0.917) .

Brandon Martinez was awful in his first professional season but he's only 18 and right out of high school. We will give him a year before we make any judgments. Drafted in the 7th round this year, he's even skinnier then Ramon Martinez was at 6'4 and 150 pounds. Next year I bet he makes some noise.

Ji-Mo Lee - didn't really pitch other then one appearance but in case you don't know who he is, here is the press release when we signed him out of Korea last spring.

Aaron Miller did start out in the AZL but did most of his work for Great Lakes so that is where I'll write him up.

Anybody else on the Arizona team that you think can make it to the major leagues?

Here is the complete breakdown by Kensai from August 20th for the Arizona League.