Share All sharing options for: Giant Bats Batter the Dodgers

The Giants doubled up the Dodgers tonight 8-4, not on the strength of their traditionally formidable pitching staff, but on the backs of their hitters. Giants starter Jonathan Sanchez didn't even last log enough to qualify for a win, going only 4.1 innings while allowing 5 hits, 4 runs, and 2 walks with 3 strikeouts. However, the Dodger pitching staff was not up to the task either. They allowed 15 hits, including 6 that went for extra bases.

Vicente Padilla allowed a homerun to Eugenio Velez leading off the game, which portended things to come. In the bottom of the first the first four Dodgers reached base but only one run scored thanks to a Russell Martin double play and a nice (if lucky) play by Jonathan Sanchez to snag a screaming Matt Kemp liner. The one Dodger run scored on a Manny Ramirez double.

Padilla and Sanchez escaped trouble until the third inning, when Pablo Sandoval rocketed a low line drive out to right center that got out in a hurry to score three runs and put the Giants up 4-1. Sanchez returned the favor in the fourth, well, sort of. He threw a 3-2 fastball six inches below Manny's knee's but that wasn't good enough to retire one of the greatest hitters ever, Manny lofted it into the left field seats anyway. That brought the score to 4-3, but that didn't last long. The very next inning Rafael Furcal hit a solo homerun to tie the score at 4 and chase Sanchez from the game.

Ramon Troncoso came in for the top of the 6th inning and was knocked around, allowing three doubles in just two thirds of an inning to put the Giants back up by two. The Dodger offense couldn't muster a  comeback from there and fell to the Giants 8-4.

The last two Giants runs came off of Chad Billingsley, who struggled mightily in his relief appearance. Billingsley was supposed to go the last two innings of the game but coudln't close out the ninth and had to be lifted for Guillermo Mota to get the last out with the bases loaded. Chad allowed a homerun to Aaron Rowand, three singles, and two walks in his 1.2 innings pitched. He also didn't strike anyone out, which certainly isn't an encouraging sign for Dodger fans.

Here's the win probability chart for the game. The odds of winning were in the Dodgers favor as late as the sixth inning: 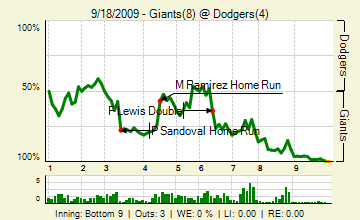 Tomorrow Jon Garland (10-11) takes on Brad Penny (10-8) at 1:10 PM in the second game of the three game set. The Dodgers magic number to clinch a playoff spot remains at 8 for the time being.