Share All sharing options for: Dodgers Week 24 In Review: Finish Line In Sight

The Dodgers dropped the hammer at home this week, winning five of six against the Pirates and Giants, bringing them to the precipice of a second-straight division championship.  The Dodgers really put it all together this week, combining a hot offense with stellar pitching, and outscored their opponents 36 to 18.  This was just the second week of the season that the Dodgers scored at least double the runs of their foes.  Way back in their undefeated week two, the Dodgers outscored the Giants and Rockies 50-17, also at home.

Seven of the eight regulars, plus the top two subs, had an OPS of .841 or higher during the week, as the offense scored six runs per game for the second straight week.  To become just the third Los Angeles Dodger team ever to score 800 runs, the Dodgers have an uphill climb, needing 74 runs over their final 12 games, an average of 6.17 per contest.

The pitching was also great, as the starters put up an earned run average under three and the relievers put up an ERA under two.  Seven of the nine relievers who pitched this week didn't allow a run.

The Dodgers have a five-game division lead over the Rockies with 12 games to play, as the inevitable truth of their 11th National League West division title is getting closer and closer.  The last time the Dodgers won back-to-back division titles was 1977-1978.

Dodger Batter of the Week:  Ronnie Belliard had another great week as a super-sub, but this award goes to the man Belliard tied for the club RBI lead during the week, Andre Ethier.  Ethier hit three home runs during the week, all of which gave the Dodgers the lead, none more memorable than Tuesday night's game-ender against Pittsburgh, his sixth walk-off hit of the season.  Honorable mention goes to Matt Kemp and Rafael Furcal, each of whom put up an OPS over 1.000.

Dodger Pitcher of the Week:  Jon Garland gets this award, his second in three weeks as a Dodger.  He won both starts, pitching 14 innings with a 1.29 ERA and 1.143 WHIP.  There were a lot of candidates this week, including Hiroki Kuroda and his one run allowed in six innings, or any of the back end of the bullpen, who didn't allow a thing all week.

Mr. Walk-Off:  Down one with Rafael Furcal on first base in the 13th inning on Tuesday night, Andre Ethier put on his hero cape again, hitting a two-run, game-winning home run off Phil Dumatrait to beat the Pirates 5-4.  It was the fourth walk-off home run of the season for Ethier, and his sixth walk-off hit this year.  No player in baseball, dating back to at least 1974, has had more walk-off hits in a season than Ethier, and his nine walk-off hits since the beginning of 2008 leads the majors.  The Dodgers as a team have 12 walk-off wins this season.

Thirty And A Hundred:  Sure, there are more advanced statistics with which to evaluate players, but sometimes the old standbys work just fine.  Growing up, 30 home runs and 100 runs batted in were benchmarks of greatness to me, and while they still require context for proper evaluation, a 30/100 season still gives me the warm and fuzzy feelings of old.  Andre Ethier's two-run home run off Tim Lincecum on Sunday gave him a career-high 101 runs batted in to go with his career-high 31 home runs.  This is just the 36th season in Dodger history (and 21st in LA Dodger history) with 30 homers and 100 RBI, and the first since Adrian Beltre's contract drive in 2004.  Matt Kemp is sitting on 25 HR and 95 RBI with 12 games to play, so there is an outside chance for the Dodgers to have 30/100 teammates for the first time since Gary Sheffield and Shawn Green in 2001.  Coming into the season, I was sure the Dodgers would have one 30/100 outfielder, Manny Ramirez, but how weird is it that he might be the only Dodger outfielder not to have 30/100 this season?

KuoGeoBro:  The terrific trio of Hong-Chih Kuo, George Sherrill, and Jonathan Broxton were great last week, combining for six scoreless innings, but this week they were sublime.  The trio faced a combined 30 batters during the week, and nobody reached base.  14 of the 30 took the long walk of shame back to the dugout after striking out.

Take The Longball Home:  The Dodgers have turned on the power switch of late, homering in a season-high 10 straight games, hitting 17 home runs during the streak.  It is the longest streak for the club since 2006, when the Dodgers had streaks of both 10 and 11 games with at least one dinger. 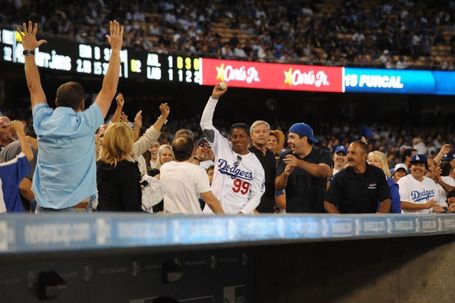 Not Quite Marlon, But Maybe Jermaine?:  Ronnie Belliard is making the most of his chance with the Dodgers.  He has started 14 of the 19 games since he came to the Dodgers, hitting .304/.339/.589 with four home runs and 14 runs batted in.  Back in 2006, another late August middle infield acquisition from Washington, Marlon Anderson, got white hot during the stretch drive, hitting .375/.431/.813 with seven home runs in 73 plate appearances.  By the way, Anderson's career high in home runs -- for a season -- was 12.  In 18 games as a Dodger, Belliard has more home runs and as many runs batted in as Andruw Jones did in 75 games in 2008.  One cost a shade over $35 million; the other cost roughly $363,388 plus Victor Garate.

Power & Speed:  Belliard also did some work on the basepaths this week, stealing a base on Saturday against the Giants.  He homered that game as well, making Belliard just the third Dodger to hit a home run and steal a base in the same game this season.  Matt Kemp has turned the trick thrice, and James Loney did it once.

Furcal's Back?: Hampered both physically and mentally by a sore back all season, Rafael Furcal hasn't been much of a threat to steal this season, even though he has the green light from Joe Torre to do so.  However, Furcal turned on the jets this week, with three stolen bases, his most in any week since September 2007.

Walk To A Cure:  On Friday night, Matt Kemp got his career-high 50th walk, giving the Dodgers eight players with 50 walks, only the third National League team in history to do so.  More importantly, the Dodgers fulfilled my "50-Walk Challenge," issued in my first-ever post at True Blue LA.  The wonderful readers of this site have stepped up, bringing our total pledged contributions to Think Cure, the official charity of the Dodgers, to $1,000.  Thanks to every one for your support.

Transactions:  Not a lot of action this week.  The only move was when Guillermo Mota was activated from the disabled list before Monday's game, bringing the total number of players on the active roster to 35, including 16 pitchers.

Upcoming Week:  The Dodgers travel to the nation's capital on their Monday off day before beginning their final road trip of the season, a nine-game tilt through three cities.  This week brings us three games in Washington followed by the first three games of a four-game series in Pittsburgh.

Magic Numbers
To win NL West: 7 (over the Rockies)
To clinch a playoff spot: 4 (over the Giants)