Share All sharing options for: Dodgers Can't Finish, Magic Number Still at One

The Dodgers let one slip through their fingers today when they fell 6-5 to the Pirates. Although runs were at a premium for much of the contest, the Dodgers broke a 2-2 tie in the 9th inning by scoring three runs off of Pirates reliever Matt Capps. However, Jonathan Broxton (with the help of his fielders) was unable to shut the door on the Pirates, allowing four runs and only recording one out to give the Pirates a 6-5 win.

Clayton Kershaw made his first start since injuring his shoulder and went 4 innings while allowing 2 runs on 4 hits, 1 walk, and 2 strikeouts. Both runs scored in the third inning on three hits, two singles and a double. The Dodgers scored previously in the inning when Rafael Furcal singled in Orlando Hudson, so the scored was 2-1 Pirates.

The score stayed that way until the 7th inning. James Loney led off with a single and Ronnie Belliard hit a double to put runners on second and third. After a strikeout and an intentional walk the bases were loaded with one out for Jim Thome. Thome grounded out to short which allowed Loney to score to tie the game at 2. Rafael Furcal then grounded out to end the inning.

In the 9th inning closer Matt Capps came on for the Pirates. He allowed three straight singles which put the Dodgers up 3-2 before Orlando Hudson layed down a sacrifice to move the runners to secnod and third. It is more than a bit questionable to give a free out to a struggling closer when you already have the lead. Manny Ramirez came on to pinch hit but was intentionally walked because there was an open base. Rafael Furcal then reached on a fielders choice to score the second run of the inning. After Juan Pierre lined out a passed ball let Russell Martin score to put the Dodgers up 5-2. Andre Ethier struck out and Jonathan Broxton came in for the bottom of the 9th.

Broton allowed two singles to start the inning to Delwyn Young and Brandon Moss. Andrew McCutchen then hit a double play ball to Furcal but he didn't play it cleanly and so the Dodgers only got one out. Andy Laroche then hit an infield single which Furcal threw away, allowing a run to score and the runners to move to second and third. Broxton intentionally walked Garrett Jones, bringing up Lastings Milledge with the bases loaded and the score 5-3. Milledge singled to right center field and Ethier misplayed and then overran the ball, allowing all three runners to score and giving the Pirates an improbable 6-5 win. 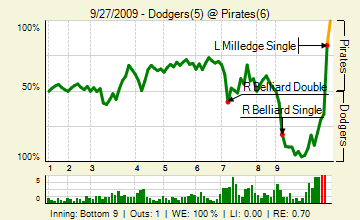 Tommorow is the finale of the four game set as the Dodgers try once again to clinch the NL West (their magic number is currently at 1). The Dodgers had the champagne ready but the loss meant the celebration has to wait at least one more day:

(The loss sent) clubhouse attendants into a mad scramble to clear out the party supplies for another time and, as it turned out after Colorado's win, another day.