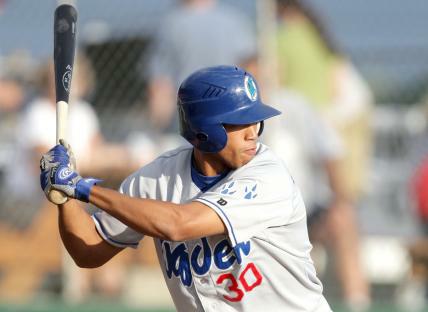 Headed into the BA review of the Pioneer League I felt the Raptors would be well represented in their top 20. I felt Gerald Sands, Galvez, Songco, would be represented at the back end with Wallach representing the pitching.  Webster or Gould did not pitch enough to qualify. I was wondering if Gorman Erickson  would sneak onto the list.

Click on the jump to see how we fared and how BA answered questions about the Raptors.

However the actual list did catch me a little by surprise. They stayed with the top draft picks for most of the top 20. Wallach did indeed make the list but they had this to say about Cavazos-Galvez who they left off the top 20 even though he was the best hitter in the league.

Another player who missed out was Ogden outfielder Brian Cavazos-Galvez, the league MVP and leader in runs (59), hits (97), doubles (29), homers (18) and extra-base hits (50). Some observers thought more advanced pitchers would be able to exploit his aggressive approach and long swing.

They had this to say about Brett Wallach who was the only Raptor to make the list:

16. Brett Wallach, rhp, Ogden (Dodgers) B-T: R-R Ht.: 6-2 Wt.: 180 Age: 20 Drafted: Dodgers '09 (3) Wallach's father Tim played 17 years in the big leagues and managed the Dodgers' Triple-A Albuquerque affiliate in 2009. His brother Matt is a minor league catcher for the Dodgers too, and Brett joined the organization as a third-round pick after leading Orange Coast to the California community college title in the spring. Wallach pitched better in his pro debut that his 5.23 ERA suggests, striking out 38 in 31 innings. At his best, Wallach pitches at 90-92 with sink, and his fastball ranges from 88-94. He also throws a hard slider with tilt and depth, as well as a workable changeup. Los Angeles is betting that his athleticism (he was Orange Coast's cleanup hitter and first baseman) and bloodlines will translate into mid-rotation potential. Wallach pitched just two innings as a high school senior and served as a closer as a juco freshman, so his arm is fresh. He has a projectable 6-foot-2 frame and a clean delivery.

TrueBlueLA (Los Angeles): Gorman Erickson made some big strides this year with the bat. Any insight on his catching skills and was he close to making the top 20?

Matthew Eddy: A 15th-round draft-and-follow from '06, Erickson did receive serious consideration for this list. Despite having just eight teams, the Pioneer League had an excess of qualified candidates, and Erickson would have ranked in the next 10. Observers viewed him as an average future catcher who shows a feel for hitting from both sides of the plate and a fair amount of power. He's a bit of a late bloomer, who at 21 has been stuck behind Carlos Santana (since traded), Lucas May and Kenley Jansen (now a pitcher). Erickson receives and throws well, so now he needs to train his body to withstand the rigors of full-season ball.

JAYPERS (IL): Does Blake Smith's future include a possible trip back to the mound, or is he an outfielder to stay?

Matthew Eddy: Despite his second-round pedigree, Smith simply did not show enough as a position player to warrant serious consideration. He batted .212/.311/.308 in 30 games and seemed overmatched by quality stuff, showing a tendency to hit around the ball and to not recognize offspeed pitches. Though he does have plus power potential, even if Smith clicks in the batter's box, he still projects as more of a .250 hitter with 20 homers. Luckily for him, he does have a fallback option as a pitcher -- especially as a potential power-armed reliever. The Dodgers though are committed to trying Smith as a hitter for at least the 2010 season.

Josh (Utah): How is the world do you not add Cavazos-Galvez to your Pioneer League top 20? The kid had outrageous numbers.

He really did have a strong year. And he was the most difficult player to omit from the final ranking. Multiple sources noted his plus bat speed and that he's hit everywhere he's played. If he played up the middle -- or even rated as an outstanding corner OF defender -- then he would be an easy call. As it is, he's a 22-year-old senior sign playing in an extreme hitter's park in Ogden.

David Bowen (Brushton, NY): The Dodgers Ogden club seemed to have some good hitters. Is this a function of their ballpark or do they have some second 20 prospects?


Matthew Eddy: It's largely a product of their park. I mean, check out the league HR leaders: Ogden at No. 1 with 89 and then Missoula second with 80. Third? Helena . . . with 46. Those are *extremely* favorable power-hitting conditions. We've touched on C Gorman Erickson and RF Brian Cavazos-Galvez, the best of the bunch, but two other corner OFs have Triple-A / big league reserve potential: Jerry Sands and Angelo Songco. Sands can drive the ball to all fields, and he reportedly hits the longest home runs of the bunch. His swing is mechanically sound, but because he figures to add to his 6-foot-4, 210-pound frame, we're probably looking at a future 1B. Songco has a pretty lefthanded swing and easy power to his pull side. He doesn't throw or run well and he struggled to control the strike zone.