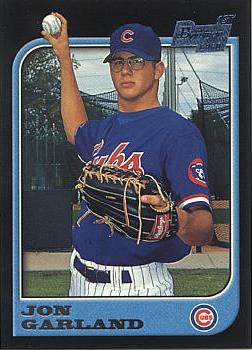 It has been a long and wealthy trip for the wide eyed 17 year old who was once the pride of the San Fernando Valley when he was the 10th pick in the 1996 draft. With a multi million dollar deal under his belt, a World Championship, a run at a Cy Young award, does the 30 year old have room to notch another successful chapter with his childhood team? The road starts tonight.

As Southern California continues to watch smoke rise with the fires burning in the background,  Jon Garland will be coming home to pitch where he spent many a night watching the Dodgers play baseball. Raised in Granada Hills the Kennedy High School  star had this to say about coming back to Los Angeles:

Dodger Stadium is, Jon Garland said, "where the dream started for me -- watching the big league guys go out on that field and do the job."


I remember that 1988 World Series," he said. "Now I have a chance to come back here and do the best I can to hopefully make a strong push for the playoffs. I'm pretty excited about it.

... To have a chance to put that uniform on, it's kind of been on the back burner since my career started, but it's definitely a dream come true."

Kennedy High School has won numerous 4A City Baseball Titles and a a few major leaguers have come from Kennedy but Garland may be the best of the lot, though Garret Anderson backers would have a good argument on their side.

After a stellar career at Kennedy  Garland was the 10th player  chosen in the 1996 draft by the Cubs and was pitching in professional baseball at the tender age of 17. At the age of 18 he was traded to the crosstown rival White Sox in one of those trades that haunt the team who traded you, and eventually made his debut at the age of 20 in 2000. He would go on to win 18 games back to back for the White Sox and was a major force in the 2005 World Championship team. He pitched a nine inning complete game victory against the Angels in the ALCS  to help propel the White Sox into the World Series. In the 2005 World Series he only started one game, went seven innings for a no decision while only giving up two earned runs in one of the great World Series games of the 21st century,  as the game went 14 innings, only to be ended when the unlikely hero Geoff Blum blasted a home run in the 14th inning.

After stops with the A teams (Angels, Arizona) he is back to help the Dodgers close out the 2009 season by plugging a hole the team felt they had at the back of the rotation. The price was not cheap but we won't dwell on that here. Garland is going to try to impress the Dodgers enough in Sept so that he will be considered for the play off rotation. With Chad/Clayton/Wolf set in stone and Kuroda due back Sunday that may be a hard task. Besides pitching for the playoff rotation he is also pitching for his option next year. At $10 Million I expect the Dodgers to pick it up but how he does in Sept could be the deciding factor.

Garland comes to the team with a reputation as an innings eater with successful playoff experience. It doesn't always go well when high school home town hero's come back to the alter they used to pray at. Hopefully things will go better for Garland then they did for Strawberry, Eric Davis, Baron Davis and a number of other athletic high school stars who were unable to shine under the lights of Los Angeles at the professional level.

When Jon Garland takes the mound tonight he will become the 12th different starting pitcher used by the Dodgers, one shy of the Los Angeles Dodgers; single-season record of 13 from 1964.

Dodger Starters are now winless in their last six games, with Padilla being the last starter to win one week ago in Colorado.

The Dodger homer streak is over at eight games. Time to start a new one. Matt Kemp's homer streak also came to an end at four games.

Manny's OPS since coming back from the suspension now sits at .877 with 190 at bats under his belt,  and his overall OPS is now down to .963 dropping like a rock from his pre suspension OPS of 1.156. The outfielders are carrying the offensive load in the last month but Manny has not been shouldering his part of the burden. Who knew that Matt Kemp and Andre Ethier would be carrying Manny and not the other way around.

Rafy Furcal has certainly been a disappointment given his contract but can we give the each at bat bashing a rest.  Should he be batting lead off right now, probably not but you know we don't have many decent options. Martin is already tired, why would you want your lead off guy to be the most tired person on the team. His only skill is his OBP and that is dropping at an alarming rate. Last 28 days Martin's OBP is .247. Has the league figured out that he no longer is a threat with the bat and just throwing him strikes? I dont' know but to advocate him being the lead off hitter just seems crazy to me. His leaded legs aren't going to produce the runs that Furcal might produce and Furcal even in this Aug/Sept slump is still getting on base more then Martin. How about Hudson? Probably the best option right now as he's nothing to get excited about but at least he's consistent.