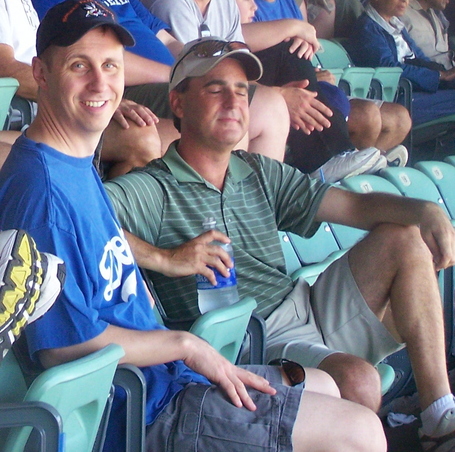 Jon can put anyone to sleep

It has to be heartening to the Dodger community, if scary for me on a personal level, that I can take two days with my family at Legoland and find that online Dodger coverage has not suffered in the slightest. I like to think I’ve done some good work over the years, but it’s pretty clear that Dodger blogging’s MVB for 2009 is True Blue L.A. Smart, thoughtful, relentless and fun (and without the weight of my personal anxieties) -- the site has simply become a powerhouse.

I have a couple more weekend trips planned for 2009, and will otherwise be trying to maintain my relevance and justify the Times' investment in me. But with Eric Stephen, Phil Gurnee and Brendan Scolari around, supplemented by the several other Dodger sites that have flowered, Dodger fans never have to worry about being abandoned.

You have no idea how heartening it is for me to read what Jon had to say about us. Most of this credit goes to Eric Stephen, but I'm sure Eric would be the first to agree with me that we owe everything to Jon Weisman from his even tempered take on the Dodgers, his excellent writing, how he handled his commentators, and finally for recommending us. We learned to write and think by watching one of the best ply his trade. True Blue has come a long way since Jon first linked to a True Blue column but I still get the same sense of accomplishment when he does so several years later. If is confirmation that we are on the right path, and though I'm much older then Jon, it is like getting approval from your big brother. If Jon had disapproved of the True Blue content I would have felt I had failed miserably as a Dodger Blogger.

This is not to say that Jon and I always agree on what is good or bad about the Dodgers, from resigning Manny to McCourts finances we have found ourselves on the opposite sides of the discussion but if we can write a thoughtful reason to support our opinions I feel that is the best we can do, and Jon more then anyone taught me how to write such columns.

It is a strange thing to say but because of Jon, True Blue is what it is today. So if you enjoy True Blue, Jon Weisman is a big reason why. May his unflagging enthusiasm for writing about the Dodgers never stop, because if it did it would mean the loss of one of the bright lights of our Dodger community.