The Dodgers beat the Padres 7-4 Saturday night, giving Randy Wolf his 100th career victory. The last palyer to win his 100th game in a Dodger uniform was Derek Lowe in the last few days of the 2006 season. Wolf pitched very well, allowing only 2 runs in 7 innings with 5 strikeouts and 0 walks. Wolf improved his record on the season to 10-6 and lowered his ERA to 3.22 (his FIP is 3.86). Wolf has certainly pitched well this year, probably better than anybody expected. In fact, David Ely of MLB.com writes in his recap that "cool-handed Randy Wolf" should be the Dodgers #1 starter in the playoffs. I think that player should be Chad Billingsley but Wolf is certainly making his case.

Anyway, back to the game. The Padres got one of their two runs off of Wolf in the first inning on a pair of singles. However the Dodgers answered right back in the bottom half of the inning with a pair of runs on a Rafael Furcal single, Juan Pierre walk, a couple of groundouts, and then an RBI single by James Loney.

The Dodgers added another pair of runs in the 2nd inning. Russell Martin and Furcal both walked and eventually scored on a single by Juan Pierre that Padres shortstop Everth Cabrera threw away. Both Martin and Pierre advanced a base in the inning on two balks by struggling starter Mat Latos. The two balks were the most in one game against the Dodgers since former Giants pitcher William VanLandingham had two balks on June 25, 1995. This was the 11th such occurence in LA Dodger history.

The Padres scored their only other run off of Wolf in the 3rd inning when Adrian Gonzalez singled home Everth Cabrera, who had hit a ground-rule double earlier in the inning. The Dodgers loaded the bases in the bottom half of the inning and while Latos was able to get out of the jam he was removed after that.

The Dodgers added two more runs in the 4th inning against reliever Edward Mujica. Andre Ethier hit a solo home run to center field and Matt Kemp scored on a James Loney single.The Dodgers added their seventh run of the game in the sixth inning when Furcal doubled to lead off the inning and Ethier doubled to plate Furcal.

The score stayed 7-2 until the ninth inning. James McDonald came into the game but allowed three straight singles without recording an out so Joe Torre decided to call on Jonathan Broxton to close the door on the Padres. Broxton allowed a single which plated two runs but then recorded his 32nd save by striking out Tony Gwynn Jr. and Will Venable and getting Everth Cabrera to ground out to short.

Here's the win probability chart for the game. It was all Dodgers: 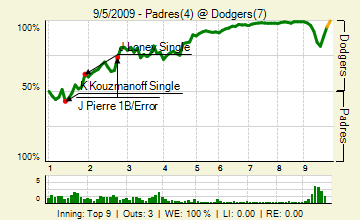 The win ties the Dodgers with the Cardinals for the best record in the National League at 81-56. The Phillies are two games behind at 77-56. Tomorrow the Dodgers will be on national television when they play the rubber match of this three game set against the Padres. Hiroki Kuroda (5-5, 4.08) will be going against righty Tim Stauffer (3-6, 3.76) at 5:10 PM.