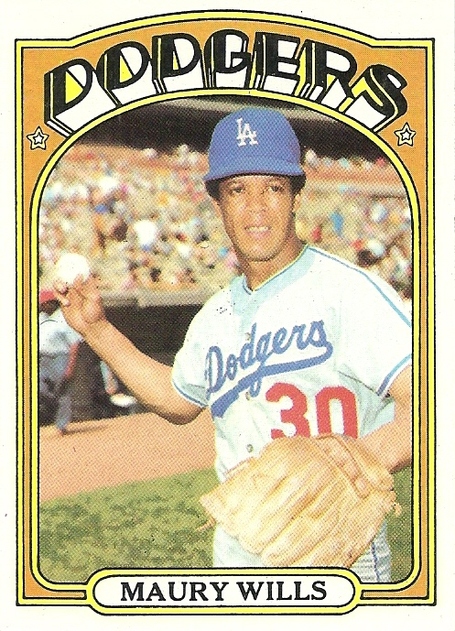 On one level, it's very easy to write an appreciation of Maury Wills. In fact, it's been done hundreds of times.

But does he belong in the Hall of Fame?

"If you measure the impact on the game and the contributions I made to my team, and even my numbers -- why not me?" Wills said.

He not only brought meaningful speed to the game, but helped the Dodgers win three World Series titles.

We've heard it all before: the unstoppable stolen base threat, the man who led the Dodgers to three world championships, reinvented the game, beat out Willie Mays for the MVP in 1962... but these, I'm afraid, leave me unconvinced of Wills' greatness.

Like many, I find stats-based arguments to be the most convincing. If I squint, I can almost see a stats argument in Wills' favor: in Wills' day, shortstops weren't expected to provide much offense. Only Jim Fregosi and Rico Petrocelli really stand out as the excellent hitters of the era at the position (Petrocelli would log almost half his career at third base), and with the other aspects of Wills' game, Wills compares well as a total player with any shortstop of his era. Bill James ranks Wills as the #19 shortstop of all time; the Baseball Page puts him at #24.

But this argument is still weak sauce to me. Is that the statistical argument for Wills -- that in a weak era, he was near the top? Is Top 25 of All Time really so impressive that we must put Wills in the Walter O'Malley Suite?

To put it more succinctly:

Though generally considered a Hall of Fame-caliber performer while active, [Maury Wills] can be seen in retrospect to be only a middling offensive player.

There is perhaps no 60s-era Dodger who more represents the divide between the old and new schools of baseball analysis than Maury Wills. It's almost as if his case were designed to pick a fight. He is a speed player -- credited, probably incorrectly, with bringing speed back to the game -- when we know now that speed is not as important as other aspects of offense. He received an MVP award -- one that is mocked today, sometimes called one of the poorest choices in MVP history. Though there are those who still lobby his Hall of Fame case, he has been judged for that by the people most likely to appreciate his skill and found wanting. He has also been dismissed as a "no-threader" (as in "we need no thread to discuss him") by the Hall of Merit. There is no groundswell effort for a new look at Wills' career. For fans born too late or too far away to have witnessed his game firsthand -- and I'm one of them -- it can be tough to have an appreciation for Wills and what he means.

But this is not the Hall of Fame; this is the Vin Scully Lords of the Ravine, and I believe Maury Wills has a good case to be considered one of the most legendary of Los Angeles Dodgers. He holds a unique place in Dodger history.

We continue, after the jump.

I wouldn't put Wills in the HOF or HOM. But I grew up in this era and everybody thought he was a star.

Here is where the divide between old-school and new-school touches its rawest nerve. For the old-school and casual fan, doesn't two-walks-and-a-homer make for boring baseball? Isn't that what old-school types mean when they say the statheads are ruining the game? Sure, baseball diehards, like most of us here, can appreciate the art of a player drawing a walk, or waiting for the pitch he can drive to the fence, but most people, I think, would like to see a player swing, put the ball in play, get that cleanly hit single. And when that batter-runner is a rabbit, well, as a fan, your heart goes into your throat. The speed plays -- first-to-third, the stolen base, the triple -- may not be how the great teams put together their offense, but they are the most exciting plays in the game.

And when Maury Wills played for the Dodgers, there was maybe no more exciting player in the game than he. The Dodgers had great pitching, of course, and surely fans wanted to see the men on the mound, but at the plate, it was Wills, that mighty little waif, that the fans came to see.

Wills stole 104 bases in 1962, and was caught stealing only 13 times. You know why? Catchers couldn't throw.

I understand James' criticism here -- it's difficult to compare Wills' stolen base percentage across eras, because the role of catcher was different in 1962. Fine. But can't we make an easy comparison between Wills' stolen bases and the Moneyball A's? The A's found a market inefficiency: low-average players with high OBP were undervalued. They walked their way to a few division titles. Should not Wills' and the Dodgers' exploitation of a similar inefficiency be lauded as much as the A's was? Perhaps those stolen bases weren't worth as much as people thought they were at the time, but they were still worth something, and 104 of them are an awful lot. Dismissing Wills' accomplishment -- "catchers couldn't throw" -- seems cheap. By exploiting the league's inability to throw out baserunners, Wills ran the league ragged.

Maury Wills once told me that there will come a point in my career when everyone in the ballpark will know that I have to steal a base, and I will steal that base. When I got out there, I knew that was what Maury Wills was talking about.

Wills today receives credit for bringing back the stolen base to the modern game. Many baseball historians point out that the stolen base revolution was already underway when Wills made his debut, and that is surely true. But this is like saying D.W. Griffith didn't invent the movie camera -- absolutely true, but he was certainly the one who took it to new heights. Same with Wills and the stolen base.

Roberts' quote about Wills -- and how much do I love that quote? -- reinforces the Myth of Maury Wills, but Wills' stolen base legacy isn't even the greatest Maury Wills Tall Tale. In the years since the end of his career, there's been a certain legend built around the Dodger teams of the 60s -- oh, the games they won 1-0, with Koufax shutting out the opposition and Wills scoring the only run on a walk, stolen base, sac bunt and sac fly. This never happened... ever.

But why should we let that get in the way? The reason stories become apocryphal is that they could be true. Though the myth never happened the way it's described, it tells me -- a boy from Schenectady, New York, born 1974 -- what it was like to watch baseball in Los Angeles in the early-mid 1960s. And you know what? It sounds like he was simply pure joy to root for. He sounds like a hell of a time at the ballpark.

In that sense, what's so wrong about building a myth, a legend of the ravine, around Maury?

Regarding his MVP Award. Enders, in his piece for Dodger Thoughts, shows just how the jury is out:

Of the 104 regular major leaguers in 1962, Wills ranked only 47th in on-base percentage and 65th in OPS+. But VORP (Value Over Replacement Player), after adjusting for position, ranks him as the 10th-best player in the NL, trailing, among others, teammates Tommy Davis and Don Drysdale. By far the most generous stat to Wills is Bill James' Win Shares, a system which goes bonkers over his defense in certain seasons. Maury's 32 Win Shares rank fifth in the 1962 NL, trailing only Willie Mays, Frank Robinson, Hank Aaron, and Davis.

No, he probably didn't deserve the MVP -- that should go to the player who provides the most value on offense and defense. Still, fifth in the league in Win Shares isn't all that far off. If Wills' defense really was that good*, I have to believe that he was a truly great player, at least in 1962.

*I admit that I do not have a sense of just how Wills' defense is viewed. One source says he was "poor" as a minor-leaguer. James' metrics go gaga for him "in certain seasons," as Enders says above. Reading between the lines, my takeaway of the general opinion is something like: he was about average among his peers in an era in which shortstops were, as a rule, very good fielders. But I have no idea if that's accurate.

-- "The Man Who Shot Liberty Valance"

In 2002, Dodger fans selected Maury Wills as the most exciting player in Dodger Stadium history. I think that's right. I wasn't there, but the legend of Wills gives me the sense that I was. I see him there, on first. The stadium is chanting go, go, go... more than Drysdale, more even than Koufax, this idea of Wills as the pest's pest tells me what it was like to be a Dodger fan.

Wills' statistical case is not strong? So what? We can still love him. His legend stands tall.