Is Don Sutton a first round Lord of the Ravine?

Share All sharing options for: Is Don Sutton a first round Lord of the Ravine? 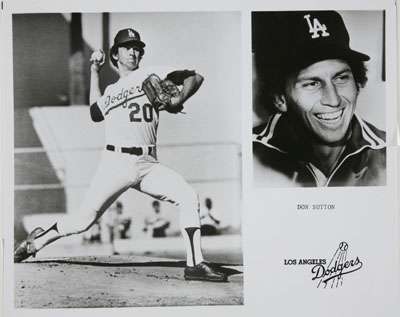 Is Don Sutton worthy to sit in the Walter O'Malley Suite and become a 1st ballot member of the Vin Scully Lords of the Ravine?

Bhsportsguy made his case but I have to say it didn't seem like he had his heart in it, and since I fully believe Don Sutton should be inducted on the first ballot I'm going to add my two cents and throw in a dollar or two.

Don Sutton pitched a 1-0 game on June 16th, 1970, the point of significance for me was that it was the first game I ever saw at the Ravine.  The was the best game I'd ever seen pitched at Dodger Stadium until Clayton Kershaw unfurled his 13 K game last year. Upto that point most of my favorite games had been pitched by Don Sutton including the opener in 1977 when he gave up  a lead off home run to Gary Thomanson but then shut them out for a 5 -1 victory.

Don Sutton did that a lot, more then any other Dodger pitcher ever. Ever. Sure he pitched more then anyone but I'll tell you one thing about these guys with long careers. They only get to have long careers because they do the job year in and year out. If they weren't effective they would not be taking the field.

His Dodger career spanned from a 21 year in 1966 to 1980. In 1980 at the age of 35 he had his last great season with an ERA+ of 160 supported by a WHIP of 0.989. He was not in the top 10 in Cy Young voting even though he may have been the 2nd best pitcher in the NL that year. Steve Carlton was the hands down Cy Young pitcher but his teammate Jerry Ruess got the 2nd most votes on the back of his 18-6 record.  Don Sutton came back in 1988 and started in the rotation until late June when he had to shut it down. He came back for one more start on Aug 9th but his arm was done at the age of 43.

Looking at the chart below you will see how Don Sutton dominates the Los Angeles Dodger pitching landscape.

The Pro's for Don Sutton:

Those are the only cons I got. Don Sutton seems to get slighted by those who dismiss the counting stats due to longevity but they seem to forget just how dominating Don Sutton could be. Five one hitters. Nine two hitters. And we are not talking a five inning one hitter or a six inning two hitter. We are talking a complete game. A mastery for 27 outs not 18.

Don Sutton is a HOF pitcher, and Don Sutton should stand side by side with whoever else gets voted into the highest level of the Vin Scully Lords of the Ravine.