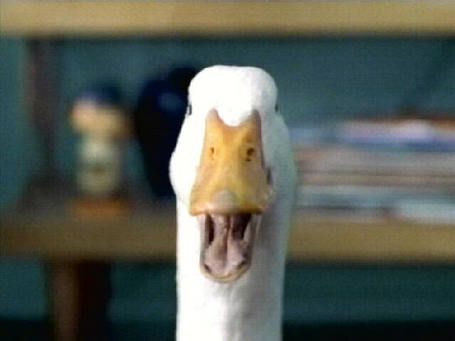 This column is for David Young who for some reason enjoys these little forays off the yellow brick road, as he goes under the knife tomorrow. Wish him well, anyone brave enough to undergo surgery in our hospitals is brave man. Make sure the surgery team does the check list. Seriously

For some of his past interviews you can check out the Duck Talk Section where we ask the questions we want to ask and try to see through the cliche responses we normally get.  For those of you new to Duck Talk, this is a complete fabrication based on interviews within my troubled mind.

Spring is about to start, let's get started with asking NC how he went about building the team

Aflac Duck: You had your eye on Wang but you pulled out, how come?

NC:Since I already had a Johnson I felt I didn't need a Wang. I'm just hoping to find Billingsley some balls.

Aflac Duck: Okay now that we have the obligatory low denominator humor out of the way lets take a look at this team. Looks like the same group that choked in Philly minus the best pitcher Wolf, and the All-Star Hudson. Spin it for me NC spin it.

Aflac Duck: Really? You mean the guy who Torre didn't feel was good enough to even start in the playoffs? The guy who did get to pitch in playoffs and was torched to the tune of six earned runs in one inning? The southpaw who came unglued in game one against the Phillies?  Those are the guys you are counting on to defeat the Phillies? No wonder you signed Padilla.

NC: You can't just look at the playoffs, only maroons do that. Billingsley was an all-star last year until he fell into some bad habits. He has as good of stuff as anyone in baseball and we expect him to bounce back.

Aflac Duck: Why? Why weren't his bad habits fixed at the time he was exhibiting them? Isn't that what the video is for? The pitching coach? The catcher? Why is a winter of rest going to fix what ailed him in the 2nd half? Isn't that just wish-casting?

NC: No, the reality is that he got hurt last winter, wasn't able to work out, so lack of  conditioning may have contributed to his bad mechanics in the 2nd half?

Aflac Duck: I keep hearing he had some flaws, so your saying those flaws would not manifest themselves until the 5th or 6th inning after he sailed through the first four because of conditioning?

Aflac Duck: How much faith do you have that Padilla can pitch a whole year like he did for the Dodgers last summer?

Aflac Duck: Are Dodger players allowed to bring guns into the clubhouse?

Aflac Duck: When is Loney going to learn how to hit at home?

NC: I don't know but if we trade him and he comes into Dodger Stadium and torches us, I'm going to be one pissed off MF. It is embarrassing when your 1st baseman can't hit a home run in his home park.

Aflac Duck: Is Belliard really so rotund that you needed to put a weight clause into his contract?

NC:He was so round in the Winter League he could have rolled his way to Camelback after floating over from the Gulf of Mexico.  He was so round that if he showed up at Dodger Stadium they'd mistake him for a beach ball and start batting him around.

Aflac Duck: Will the Dodger fans ever see pre all-star 2008 Martin again? Or has the bad Kendall clone firmly ensconced himself into the Martin being?

NC:Man I hope so, no one expected him to go from the good Kendall to the bad Kendall just because he had to catch most of the all-star game.

Aflac Duck: If you had to pick between Matt Kemp and Andre Ethier which one would you pick?

Aflac Duck: Speaking of your biggest mistake, how humbling was it to ask Frank to approve the deal that sent Juan away?

NC:It was easy compared to asking him to eat all of Andruw's contract. As long as we only have to eat one lousy contract per winter Frank is okay with it.

Aflac Duck: This is the first spring in three years we don't have to hear about how Jason Schmidt is going to earn his money. You must be breathing a sigh of relief now that you have Schmidt, Jones, and Pierre off the payroll. Is that why you signed Jamey Carroll to remind yourself that every team should have at least one bad contract?

NC:Jamey Carroll is a baseball player, who can help out all over the diamond,  John Hart says he's gritty good.

Aflac Duck: Will the fact that Broxton has failed twice against the Phillies in back to back seasons have a carry over effect into this season?

Aflac Duck: Is Broxton becoming the new version of Billy Wagner? One of the best closers in baseball but someone you can't count on in the playoffs?

Aflac Duck: Since the summer of 2008 you have traded three switch hitting prospects in Carlos Santana, Josh Bell, and Tony Abreu.  The only one left is Trayvon Robinson, should he keep his bags packed?

NC:I don't have anything against switch hitters, those are the guys that the other teams wanted or No Deal.

Aflac Duck: In 2008 you signed a brittle Nomar to be our 3rd baseman. When that did not work out you ended up having to trade top offensive prospect Carlos Santana for Case Blake. In 2009 you signed Will Ohman to be our 2nd strong left hander out of the pen, when that did not work out you had to trade our top offensive prospect Josh Bell for George Sherrill. Who did you sign this winter that is going to screw us, causing us to trade one of our prime prospects this summer to make up for it?

NC:Probably Padilla, or Carroll, hey it was not like I signed very many guys this winter. The choices are limited.

Aflac Duck: At some point are you ever going to let your minor league pitchers of the year pitch in the rotation or simply keep using the Eric Miltons of the world over and over? Ramon and Russ Ortiz? Josh Towers? Depth is depth, but crappy depth is simply crappy depth. Speaking of crappy depth what is with the plethora of lousy middle infielders? Not enough that you are actually paying Jamey Carroll but then you bring in Berroa, Nick Green, Argenis Reyes, and a broken Amezaga. Wilson Valdez or Oscar Robles not available?

NC:Are you done? How can you not understand that every team needs depth, depth, and more depth.

Aflac Duck: are you scared to death your season might be riding on the health of a 38 year old left fielder?

NC:No, we brought in some excellent candidates to help out Manny.

Aflac Duck: Yes, you did bring in some candidates. Normally when you give a quick comment about the players you have acquired you talk about great character guys. This character thing seemed important to you, yet last week you signed Brian Giles, a man who was caught on tape knocking his girlfriend to the ground.  During your tenure you have acquired a SS who was released by the Astro's for knocking his girlfriend around in public,  a pitcher who was cheered by his teammates when he was traded because he was considered such a jerk,  and now a 25th type of player who appears to have done a bad job of managing his steroid rage as he's involved in a  Civil Suit for allegedly causing the miscarriage of his girlfriends baby due to the violence he inflicted on her? Are these what you call good character guys?

Aflac Duck: Any truth to the rumor that your wearing the Beards' beard as your toupee?