Who was this Gagne anyway and what is he doing here?

Share All sharing options for: Who was this Gagne anyway and what is he doing here?

Everyone likes to see their hero come home carrying their shield having vanquished the beast rather then being defeated with someone else dragging them home on their shield. No Dodger was a bigger hero in the 21st century then Eric Gagne.

He's back but with very tepid expectations. Many Dodger fans are already writing him off, not even expecting him to make the team.  If he does make the team they are expecting an Orel like farewell.

They are probably right, but the reason for spring training is hope, if you can't have hope in March then you are hopeless. As a writer about the Dodgers I carry my emotion on my sleeve and in my head. This time I'll skip the head and use my sleeve. Eric Stephen has already done a great job in explaining what Gagne was and why we should limit our expectations but since Gagne was Gagne and a reason many young fans became Dodger fans I'd just like to add my two cents.

Many of you are new to Dodger fandom and have only heard of Gagne. For a four minute recap of Eric Gagne time as a Dodger check out this excellent video report  Eric Gagne Dodgers Tribute - FanDome that does an excellent job of showing what Gagne did during his reign as closer supreme with the Dodgers.

Eric Gagne made being a Dodger fan cool again, you had to simply be a part of the experience to understand the impact. For whatever reason all of Dodger Stadium embraced the Jungle. I had first hand glimpses of this phenomena as my seats were right next to the Dodger bullpen. I knew when Gagne got up to stretch it would start building and by the time he was throwing in the bullpen the push against the us was enormous as everyone simply needed to glimpse the great one at work. It was just like being at the edge of the pit for a rock star performance. The place simply lost its head. They started standing from the moment he trotted in to Welcome to the Jungle and didn't stop until he had struck out the side time after time. 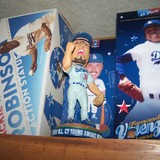 Check out the Eric Gagne Statistics and History - Baseball-Reference.com

For some humor check out this Red Sox Tribute to Gagne after he blew one too many saves for them.

The Eric Gagne Song (via MRSLANEY7)

Any real reason for optimism?  Gagne Works with Howell as he tries his best walk into the Jungle and and out still standing.   We have all heard the same song before about Gagne feeling good so while my expectations are limited my hope is eternal.