Every Lord needs a King

Share All sharing options for: Every Lord needs a King

and I've got just the man. For a team with a fine stable of solid catchers which includes Roseboro, Haller, Yeager, Fergy, Scoscia, Lo Duca, and Martin one man stands so far above them you could cut him off at the knees and his bloody stumps would still stand tall over them. 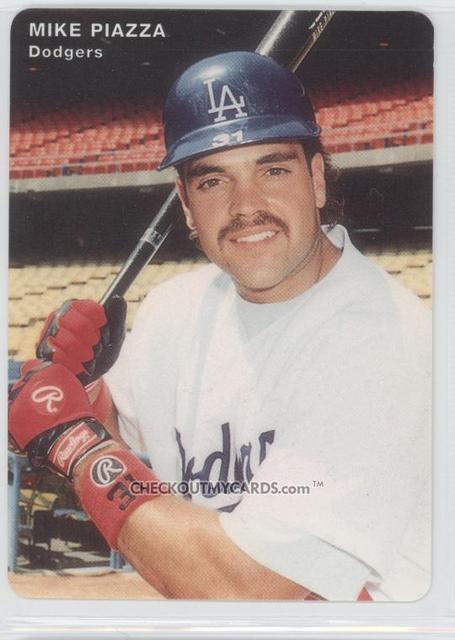 This and other great 1995 Dodger cards can be found here.

We have read some great stories about our position players who have had good or even great careers, but not one of them had five years like Mike Piazza.  From the time he showed up until he left he was the best at his position every year. Five years, five Silver Slugger Awards.  The Los Angeles Dodgers have zero HOF position players who did the bulk of their work in the Ravine  without any prospects for the future. The one who fell into their lap by pure luck the Evil Empire decided to trade in the prime of his career.

Growing up a sports fan in Los Angeles we have had a few punches to the stomach that leave you gasping for reason but the toughest punches for me to deal with was Magic Johnson announcing he had aids, and May 14th, 1998 when the Dodgers traded the most valuable player in baseball.  For this life long Dodger fan it was a fatal blow to my fanhood, and turned me into a baseball fan more then a Dodger fan until Fox did the right thing and sold the team.

From the time he first showed up at Dodger Stadium he quickly became my favorite Dodger of all time. No one in my opinion had ever hit the ball as hard, and as consistently in the Ravine as the man no one wanted in the 1988 draft. Being slow, you have to be one hell of a hitter to post a .362 average but he did it with ferocious line drive after line drive. The ball simply jumped off his bat making a sound that hadn't been heard in Dodger Stadium in my life time. This might sound like hyperbole but I 'd been watching Dodger baseball since 1970 and I never heard a ball make the sound it did when this man squared up on it.  He did it all from the offensive side of the game. Batting average, On Base %, Slug%, Home Runs, Runs Batted In, he was always on the leaderboard.

For fun I wanted to know how many catchers had ever hit more then 30 home runs and had a batting average > .340?  Only one.

Okay, how many catchers had ever hit more then 30 home runs and had an OBA > .400? One man holds the top three spots out of six matching seasons in the history of baseball, and you know his name.

How many right hand hitters had hit the ball out of Dodger Stadium until he did it? No one

How many catchers hit more then 24 home runs and had an OBP > .359 their first 10 years as a starter? Only one

How many catchers have hit more then 35 home runs? 18 times this has been done. Only one man has six of those 18 seasons and it ain't Johnny Bench.

How many right handed catchers have had an batting average > .360? Only one

Unquestionably the two best Los Angeles Dodgers are Sandy Koufax and Mike Piazza as they both put together far and away the best five year runs in Los Angeles Dodger history.  The difference between the two is that Piazza from the moment he became the starting catcher was one of the best players in baseball. Home grown Los Angeles Dodger greatness. When you look at his production while he was a Dodger you could make a case he was the most valuable player in baseball during that time given the fact he was a catcher, and other players in the conversation were all 1st/OF. Every year he started for the Dodgers he finished in the top 10 in MVP with two number two's, and we all know who the real MVP was in 1997, and it wasn't Larry Walker.

The legend starts with him being drafted in the 62nd round, in the 1988 draft. The 62nd round, wrap your head around the fact that no one in baseball in any way, shape, or form thought this guy had any chance of lasting more then one professional season.  He was drafted strictly as favor to his brother Tommy's Godfather, Tommy Lasorda. If Tommy did nothing more then befriend Vince Piazza, he did enough to hang around and tell stories for as long as wants.

Between the start and the end of his Dodger career he put up comic book numbers.

I'm sure some of you who were lucky enough to see him play have your memories. I have no idea what game I first saw him play but it was early in the spring of his first season. I was somewhere down the right field line when I first heard him hit the ball. It was a sound I would hear over and over again over the next five years and to say the least, the first time I heard the sound, it left an impression.

I won't sugarcoat the fact that Mike was not the greatest defensive catcher. According to Bill James

probably the best hitting catcher ever to play the game

however because of his defensive shortcomings Bill James only ranks him as the fifth best catcher of all time. He didn't have much of an arm but I always thought he had soft hands, and was able to catch some of the best pitchers we had such as Ramon Martinez, Ismael Valdez, Hideo Nomo,  and Pedro Astacio.

I'll always remember one play he made which I think was against the Mets Phillies in which somehow he ended up covering 3rd base, made a spectacular catch of an errant throw, put down a sweeping tag for the out at 3rd.  Some will say he was not athletic, I say those people never saw him play the game in his prime and only remember him as an old Met after a 1,000 games at catcher.

Never won a playoff game as a Dodger, succumbing two years in a row in three straight. Tight games in which one key hit might have made the difference. Didn't happen. The only blight I can think of on his Dodger career.

The man he was traded for was every bit the hitter that Mike was. He would end up breaking several of Mikes offensive records. It was eerie how close they were in their Dodger careers. Sheffield would end up with an OPS+ of 160, Mike 159, but Gary only had 2276 plate appearances. Even if I had moved the requirement down to 2500 he still would have fallen short.  That fifth year really makes a difference. The next best hitter was Reggie Smith and while Reggie played six years he only had 2055 plate appearances. Multiple injuries kept down one of the best hitting LA Dodgers until Piazza showed up. To bad because given his defense and offense Reggie Smith might have been the best Los Angeles Dodger to ever play for us.  Pedro Guerrero is probably the best LA Dodger hitter when you figure in the fact he had over 4,000 plate appearances. He did it longer then anyone at a higher level then anyone.