Dodgers Arrive In Taiwan; Belisario Not There, Either

Share All sharing options for: Dodgers Arrive In Taiwan; Belisario Not There, Either

As the crowded Dodger non-roster invitee list gets a little less crowded with the retirement of Brian Giles (per Dylan Hernandez of the L.A. Times)...

The Dodgers arrived in Taiwan this morning, and begin their three-game series early Friday morning, at 2:37am.  Here are a few shots from their welcoming press conference (both courtesy of Jon SooHoo / LA Dodgers): 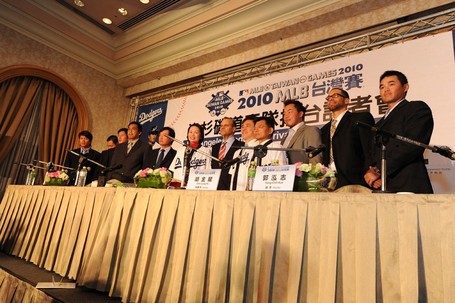 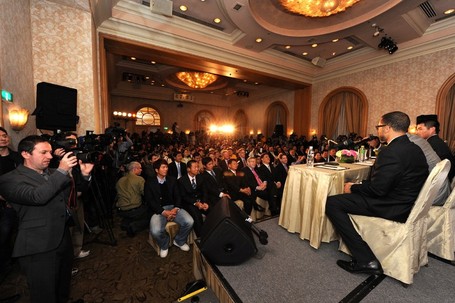 In other news, Roberto Baly of Vin Scully Is My Homeboy translated a report from Venezuelan newspaper El Universal on Ronald Belisario:

Belisario has missed three dates with the U.S. embassy for paperwork, which is the reason he has yet to report to Camelback Ranch.

The benefit of the doubt is slowly slipping away from Belisario's grasp.

Earlier this offseason, there were reports that the Chiba Lotte Marines of the Japanese Pacific League were interested in Eric Stults.  Per NPB Tracker, that interest is apparently gone, given the relatively high cost of a potential transaction:

(Here's a Babelfish translated versionof that link.) Stults is currently battling for the fifth starter spot in the Dodger rotation and, because he is out of options, is likely to get a longer look than pitchers with options, like Scott Elbert or James McDonald.

Here are the lineups, the order of which hopefully will stay the same today:

After McDonald, scheduled to pitch for the Dodgers are Russ Ortiz, Ramon Troncoso, Travis Schlichting, Javy Guerra, and Armando Zerpa.

Among the scheduled pitchers today for Royals are Aaron Crow, Edgar Osuna, and former Dodgers Matt Herges and Joakim Soria.

Tomorrow, scheduled to play at Camelback Ranch against the Reds, Clayton Kershaw is scheduled to start, followed by Carlos Monasterios, Jonathan Broxton, George Sherrill, Luis Ayala, and Brent Leach.  Cuban phenom Aroldis Chapman is among the Reds scheduled to pitch in that game.

No TV today (tomorrow is on Prime Ticket), but you can listen online here.