Share All sharing options for: Dodgers Drop Opener in Taiwan

The Dodgers dropped their opener in Taiwan, losing 5-2 to the Chinese Professional Baseball League All-Stars.  Some notes from the game:

Here are a few photos from baseball clinic for 100 little leaguers, led by Chin-lung Hu  and Hong-Chi Kuo at Taipei Municipal Tienmu Stadium in Taipei on Friday night: 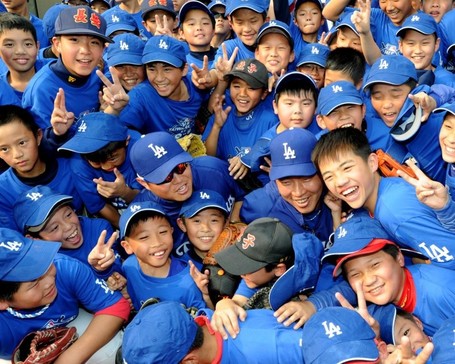 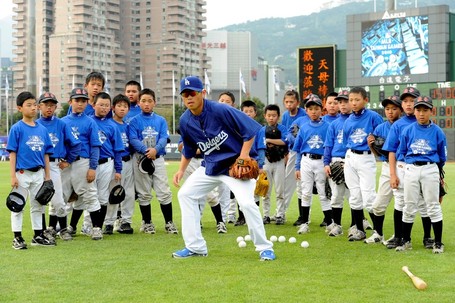 It was insanely high and just shooting up 89 floors in about 30 seconds made our ears pop. Joining the group at that point was James Loney, Prentice Redman and Kenley Jansen and while we were there, we found out that Manny Ramirez was having lunch at a restaurant just 14 floors below.

From the fastest moving elevator to the world's slowest moving reliever: Ned Colletti yesterday addressed the reports that Ronald Belisario missed three appointments at the U.S. Embassy to acquire his work visa.  Tony Jackson of ESPN L.A. has the details:

Dodgers general manager Ned Colletti said he has been given no indication of when Belisario might show up or why he has missed the appointments.

"You would think that when you have the opportunity to make a living throwing a baseball, and the opportunity presents itself to pitch in the big leagues, support your family and build a career, that would be something you would pursue to the fullest,'' Colletti said.

Belisario's agent didn't have an update from his client yesterday.  Per the Associated Press:

Paul Kinzer, Belisario’s agent, said Thursday that he didn’t have an update on his client’s status.

“I’m waiting to hear from him today,” Kinzer said. “He’s supposed to be at the consulate now.”

Belisario has lost any benefit of the doubt in this situation.  The Dodgers are mad, and rightfully so.