In their first spring game without a designated hitter, the Dodger bats came alive in a 7-3 victory over the Cubs at Camelback Ranch.  Manny Ramirez, making his spring debut in left field, launched a home run onto the berm area in left center field in the first inning, leading a seven-run, 11-hit attack by the Dodgers.

Chad Billingsley became the first Dodger starter to pitch into the fifth inning in an "A" game this spring, throwing 4.2 innings before hitting his pitch count limit of 75.  Billingsley allowed one run on five hits, walking one while striking out four.  "As far as my delivery, everything felt good, my fastball felt good," Billingsley said.  Before the game, manager Joe Torre said he would like Billingsley to go deeper into today's game, and not try to be so perfect.  After the game, Torre was pleased, praising Billingsley for being "very good and economical, close to 15 pitches per inning."

Billingsley said he is well ahead of last year's schedule, thanks to a healthy offseason.  Last year, while recovering from a broken ankle, he didn't start his workout program until January.  This offseason, his workouts started in November and he's just happy to be putting in work to get ready for the regular season.

He's also putting in work at the plate, as today he registered the first plate appearance by a Dodger pitcher this spring.  "The hands are a little slow," Billingsley said of his efforts with the lumber, "the ball looked like 100 miles per hour coming to the plate."  Both Billingsley and Cub starter Ryan Dempster bounced back to the pitcher in their first at-bats today, but Billingsley wanted it known that he hit his much harder than Dempster.  "He dropped mine before throwing me out," Billingsley said of Dempster, adding with a laugh, "I need some more at bats."

Reed Johnson also hit a home run, a three-run shot in the seventh inning that elicited an excited cheer from Matt Kemp in the clubhouse.  Kemp himself hit a double earlier in the game, although it looked like a single coupled with an ill-fated dive attempt by center fielder Tyler Colvin.

Other notes from the game:

A few hours before the game, I took a shot of the field from the press box.  At the time, the window was closed: 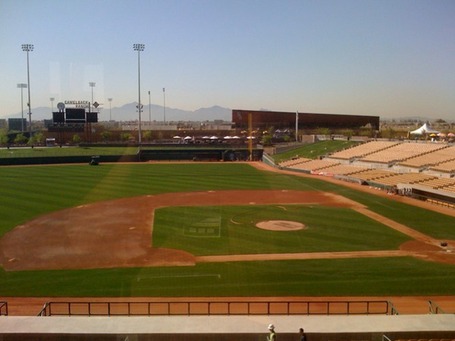 Just before first pitch, here's a shot from the same spot, this time with the window open.  This was my vantage point all game: 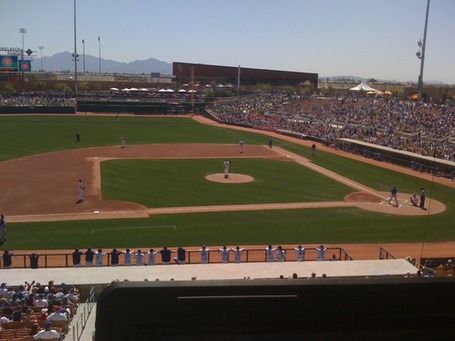 Earlier in the day, BHSportsGuy and I walked around the Dodger side of the facility.  We saw some infield drills on the minor league fields: 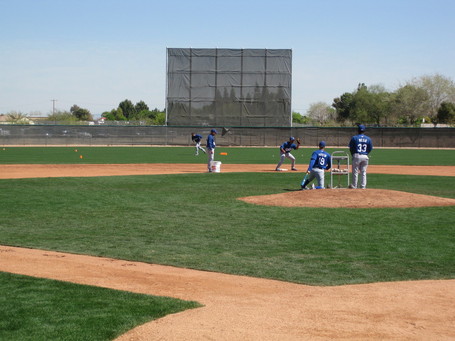 We also saw a former Dodger star, now a coach: 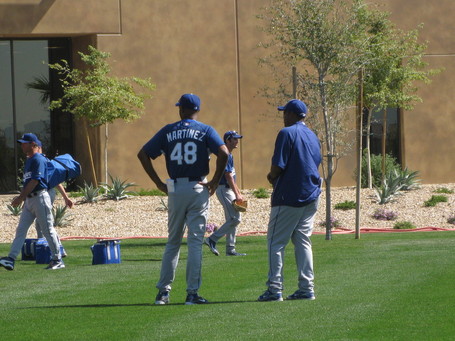 Finally, one of my favorite quirks of spring training, when players run along the warning track in the outfield, during play.  I love this almost as much as I love Bobby Cox and Jim Leyland wearing cleats in the dugout while managing.  Here are Casey Blake, Matt Kemp, and James Loney running, keeping left fielder Xavier Paul company midway through the game: 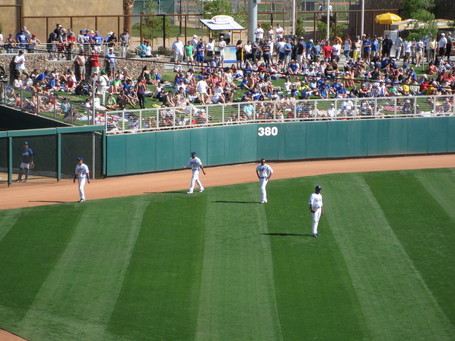