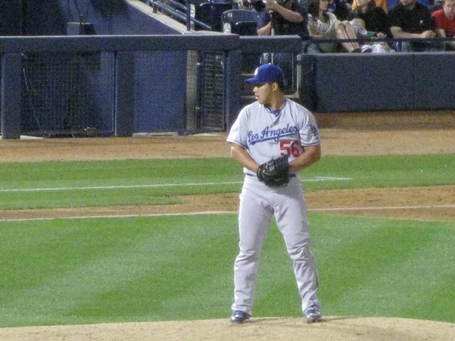 The Dodgers lost tonight's road game in Peoria, 9-4 to the Padres, but a pair of pitchers shone bright despite the result.  Hong-Chih Kuo pitched for the first time since being shut down for elbow soreness, pitching a scoreless fifth inning, inducing three groundouts and, at least from my vantage point in the stands outwardly showed no ill effects from the outing.

But the star of tonight's Dodger show was again Chris Withrow, who wowed again with another scoreless inning.  He induced a chopper to first by Tony Gwynn for one out, and struck out Chris Denorfia and Oscar Salazar to bookend the frame.  The crowd had thinned out by the bottom of the eighth, mostly due to a 9-4 Padres lead, so BHSportsGuy and I were able to move down a few rows behind the Dodger dugout to watch Withrow up close.  His fastball was live and explosive -- according to Gameday he threw 12 fastballs, all within 93-95 MPH -- and he broke off a pair of nice curves to Oscar Salazar.

In two appearances in big league camp this spring, Withrow has faced seven batters.  Five have walked back to the dugout after striking out, one hit a weak grounder to first base, and the other -- Jim Tracy's son Chad -- was hit by a pitch.  The 20-year old Texan (Withrow turns 21 on April Fools Day) has turned some heads this spring.  In keeping with tonight's theme, Withrow and Kuo's connection was chronicled by Ken Gurnick of MLB.com:

"I told him I had been there," said Withrow. "I knew exactly what he was going through. He told me what was going on in his head, and I told him I went through the exact same thing. I told him, 'Kuo, I was you. I came back, and you can do it, too.' He told me this might be his last year. 'No it's not,' I told him. He pitched that night, and he was lights out. I told him, 'There's nothing wrong with you.'"

Here are some other notes: