Lima Time was a Special Time

Share All sharing options for: Lima Time was a Special Time 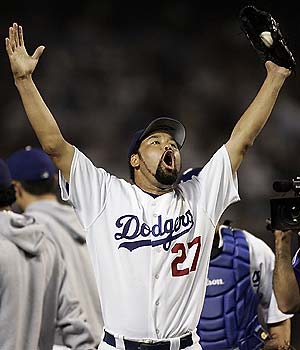 The news of Jose Lima dying at the age of 37 today should have shocked all of us. I expect to write about Dodgers dying but not guys who are 14 years my junior. He only pitched for us for one year but man oh man, what a year it was.

Until Jose Lima joined the Dodgers I considered him a showboating fool, who was all about public relations. In 2004 with the change in ownership I delved into buying season tickets, and ended up right next to the Dodger bullpen staring down into that strange world of hierarchies.

I wasn't happy that Lima had made the team in the spring of 2004, he was to me someone who should be pitching for a losing program not the Dodger program. I also have never been a fan of fake showmanship, and at the beginning Lima  seemed all about fake showmanship. Later as I settled in to my season tickets Lima would prove me wrong in every which way.

First off, in 2004 the man could pitch, in fact as I wait for Ely to fall to earth,  I should take note of what Lima accomplished with less.

Second, the man loved this game and the fans. No Dodger before or since Jose Lima, interacted on a daily basis with such enthusiasm. His love of the game was contagious and since he loved the fans, they loved him back. Lima Time was not just some bullshit term, Jose Lima earned it by using every trick in the book to fool the hitters, and genuine enthusiasm  to make the fans feel like someone actually cared about them.

When Jose was first used in the bullpen he would be the first guy to show up, and shower the stands from the field box to the reserve with free baseballs.   Later when he became a fixture in the rotation he still would come down to the bullpen area to chat with the fans. He's the only starter who has ever done that on a consistent basis.

He sang the national anthem and to be honest I have no idea if he was any good or not, because most of Dodger Stadium was ogling his gorgeous wife. 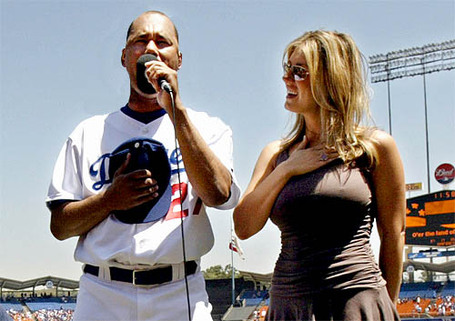 However without something to cap off the season, he would simply have been remembered as just another interesting Dodgers, but in October he did something completely unexpected. He pitched the game of his career, and he did it in style. It was the greatest game I've ever witnessed at Dodgers Stadium. From the time Jose Lima was warming up until the last out, Chavez Ravine was buzzing. I've been to a game like that before but the buzz stops when the pitching fails, this time the pitching did not fail.

It wouldn't have been the same if someone like Orel or Fernando had pitched the gem. The greatest part of the game was the complete surprise that someone like Jose Lima could pitch the greatest Dodger playoff game in the last 16 years.

Jose Lima shut out the prodigious St Louis lineup for the first playoff victory for the Dodgers since 1988. He shut down Albert Pujols. He shut down the critics.

He won our hearts forever.