Ethier Back as Dodgers Face Diamondbacks

Share All sharing options for: Ethier Back as Dodgers Face Diamondbacks

The Dodgers begin a 13-game homestand tonight against the Diamondbacks, with their regular lineup intact for the first time since April 22 in Cincinnati.  Andre Ethier has been activated off the disabled list for tonight's game, and the roster casualty is Xavier Paul, who was optioned back to Albuquerque, per Dylan Hernandez of the LA Times (welcome back, Dylan).

Entering today, the Dodgers and Braves were tied for the best record in baseball in May, at 19-8.  Atlanta threw down the gauntlet by beating the Phillies today, so the Dodgers need to win to keep pace.  The Dodgers also won 20 games last May, going 20-9.

With today being Memorial Day, all major league teams will wear an alternate "Stars & Stripes" cap, as they will on July 4 and Labor Day as well.  Here is this year's version to be worn by the Dodgers: 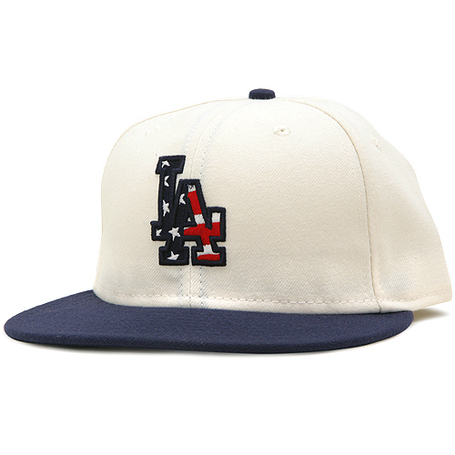 At least they are better than the red caps from last year.

Ethier may have missed 16 days while on the disabled list, but he is still working on delayed hot streaks.  He has a modest four-game hitting streak, but he has eight hits in those four games and an extra-base hit in each one.  Ethier has played just 12 games in May, but has nine multi-hit games and nine games with an extra-base hit, with 14 extra-base hits in all.

Ethier went on the disabled list leading the league in batting average, home runs, runs batted in, OPS, on-base percentage, and slugging percentage.  A little over two weeks later, he enters play just two home runs and three runs batted in the leaders, but still leads in batting average, slugging percentage, and OPS.  His status atop the rate statistics is even more impressive when you consider Ethier is 15 plate appearances shy of qualifying, yet still leads despite having 15 artificial hitless at-bats added to his ledger.

Ramona Shelburne has a wonderful feature on Ethier on ESPN Los Angeles, highlighting his progression both on and off the field:

"My kid taught me patience instantly," Ethier said. "I've got a little guy now and he's going to be paying attention to how I act and react. I mean, kids copy and emulate everything that you do. You can't cuss around a kid because the next day they'll use that same word.

"It was an eye-opener for me when my wife put it that way.

"And afterwards, it was something I felt a little embarrassed about, because it wasn't just my kid but other kids out there, looking up to you and I was being that type of example.

"It was a life change I had to make. No more certain radio stations in the car, no more certain TV stations, it's all aspects of life. Now I've got the TV on with 'Yo Gabba Gabba' on the whole time."

Whether it was fatherhood, the confidence born from his remarkable penchant for walk-off hits or simply maturity, it's clear Ethier has arrived in a happy place.

His passion is working for him now. His patience is helping him.

Chad Billingsley enters tonight's game on a roll.  Over his last seven starts, he is 5-2 with a 2.51 ERA in 43 innings Billingsley has won four straight starts, and is looking for the first five-win month of his career.  Billingsley, who is 4-1 this month, also won four games in July 2008 and April 2009.

Billingsley and Rodrigo Lopez also squared off on April 14, the second home game of the season for the Dodgers.  Neither pitcher fared well: Billingsley allowed six runs and 11 baserunners in 5 2/3 innings, and Lopez gave up five runs and twelve baserunners in five innings.  At 1.43 home runs per nine innings, Lopez has the fifth-highest home run rate among National League starters.  Amazingly, teammate Dan Haren is first.

Manny Ramirez has faced Lopez 75 times in his career, but has only hit .250/.320/.359 with a double and two home runs.  Nobody has faced Billingsley more than Stephen Drew, who is hitting a whopping .415/.467/.634 against Billingsley, including three for four this season, with two doubles, a home run, and two walks.

The Diamondbacks have lost seven straight games, perhaps crumpling under the pressure of being rated 11th in the Beyond the Boxscore power rankings last week (hat tip to Xeifrank for the reminder).  During the streak, Arizona relievers have a 7.52 ERA and 1.918 WHIP, which is outrageous but par for the course of their performance on the season (7.68 ERA, 1.809 WHIP).  What has doomed the Diamondbacks on this losing streak is that their starters have given up 34 earned runs in 38 1/3 innings, for a 7.98 ERA and 1.800 WHIP.