Should John Ely Skip a Start This Season?

Share All sharing options for: Should John Ely Skip a Start This Season?

In a recent fanpost here, The Newbster raised a question regarding John Ely and his work load, specifically, should we be concerned about the number of innings John Ely pitches this season?  After all, at barely 24, Ely, while not as youthful as Clayton Kershaw, is still would most baseball observers would term a young pitcher, and theories abound as to how to manage the workload of young pitchers.

Using statistics from baseball-reference.com and thebaseballcube.com, I gathered the innings pitched numbers for Ely from his college days to the present.  I used those numbers to create the graph below. Additionally, I projected his remaining workload for 2010.  Assuming he stays in the rotation for the remainder of the season, he should make 21 more starts.  For my projection, I assumed an average of 5 2/3 IP per start, but your mileage may vary.  Fortuitously, 21 is a multiple of 3, so if you think Ely will average 6.0 IP per start, you can just add 7 to the numbers you see below.

Is this potential increase in innings pitched worth worrying about?  Tom Verducci of Sports Illustrated has used a 30 IP increase as a rule of thumb to make fairly accurate predictions about young pitchers (25 and under) who are susceptible to injury the next season.  Whether or not 30 IP is the right number, it is generally acknowledged to be in the ballpark.  My projection takes Ely very close to that 30 IP before even considering post-season play, and an average of 6.0 IP per start would take him over than threshold.

As a team that expects to contend for post-season play, it may be in the Dodgers and Ely's long-term interest to consider if a skipped start or some other innings limiting measure might be the right course of action.  It's a tough call because a team like the Dodgers also actually needs to win ball games to even make the playoffs, and skipping an Ely start for, say, Charlie Haeger might not help to serve the goal of winning. 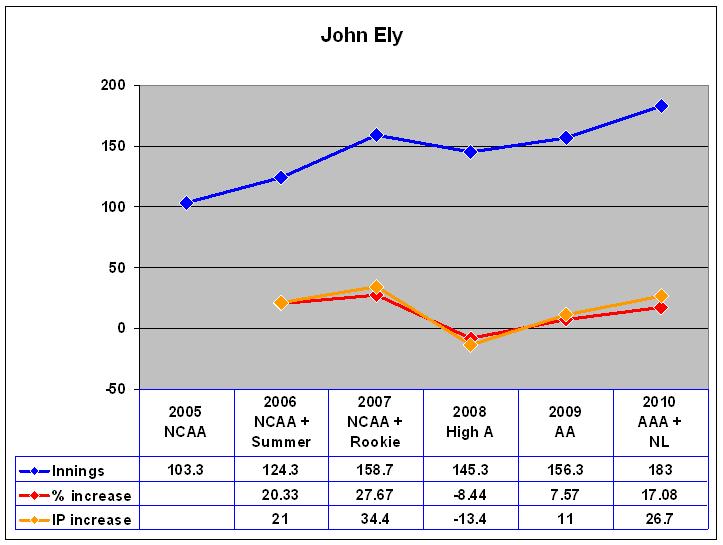 At this point I would guess that if Ely remains effective and at a projection similar to what I show above, the Dodger won't do anything pre-planned to limit his innings, because his work load won't increase enough over the 30 IP threshold for a playoff-contending team to worry about it.