Kershaw & Manny Provide All The Positive Energy The Dodgers Need

Share All sharing options for: Kershaw & Manny Provide All The Positive Energy The Dodgers Need

Some early offense, including a first-inning two-run home run by Manny Ramirez, gave Clayton Kershaw the cushion he needed, as the Dodgers won yet another one-run game at home, beating the Cardinals 4-3 to complete a three-game sweep.

Kershaw pitched seven strong innings, striking out 10, allowing all his runs courtesy of a three-run home run by Ryan Ludwick in the fourth inning, the third home run of the series by Ludwick.  Ludwick came close to hitting a fourth series home run in the sixth inning, but it was caught at the base of the wall by Manny Ramirez. 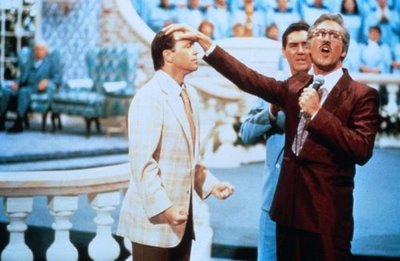 This win came amid bizarre news from Bill Shaikin of the LA Times that the Dodgers paid a Russian "scientist and healer" named Vladimir Shpunt to provide positive energy for the club by watching the club from afar.  The line of the article, which reads more like a parody than anything else, came courtesy of an email from attorney Barry Cohen to Jamie McCourt, after Steve Finley's division-clinching walk-off grand slam in 2004:  "The miracle finish … was the result of V energy.  Frank was privileged to actually feel the energy."  Say what you want about the McCourt ownership, but you have to hand it to them for finding new and creative ways to embarrass themselves.

Shpunt is no longer on the club payroll, so he probably wasn't watching tonight, so they had to rely on Ramirez, Kershaw, and a couple of others for the positive energy needed to win.  James Loney positively energized four hits, including a double, and Blake DeWitt drove in a pair of runs with a two-run single in the third inning.

Ronald Belisario pitched a perfect eighth, and Jonathan Broxton entered in the ninth inning to face the heart of the Cardinals' batting order for the second straight night.  This time, Albert Pujols singled, and with two outs Yadier Molina hit what might have been a game-tying double into the right center field gap, only it happened to bounce over the wall so Pujols had to hold at third base.  Randy Winn grounded out to end the game one batter later.

The Dodgers are now 10-1 in one-run games at home this season, and 15-6 overall in one-run games.  Eleven of the club's last 14 games have been of the one-run variety, and they won nine of the 11.  They went 11-5 in their stretch of 16 games in 16 days, and tomorrow they get a much-needed day off before hosting the Angels to complete the homestand.

Photo courtsey of Pluck You Too