What To Do With James Loney

Share All sharing options for: What To Do With James Loney

Oh, how I want James Loney to succeed. He was a key part of the Jacksonville Five in 2005, he hit .380 in Triple A in 2006, and in the final days of the season that year, in a pennant race, Loney tied Gil Hodges for the franchise record in RBI with nine against the Rockies in Coors Field. His grand slam off Ryan Dempster in Game 1 of the 2008 NLDS turned the tide of that series, helping the Dodgers to their first playoff series win in 20 years.

I screamed bloody murder when Loney didn't make the club out of spring training in 2007. "He has nothing left to prove in the minors" was a popular refrain I shared back then, ignoring the fact that he hit a single home run in 261 plate appearances in the hitter-friendly Pacific Coast League, the same league in which he led all of baseball in batting average just one season before. Loney, along with Matt Kemp, came up in June 2007 to stay, and for the most part Loney has been entrenched in the Dodger lineup ever since. Loney has missed a grand total of five games since the beginning of the 2008 season.

Well, here we are, nearly three years later, and those 15 home runs Loney hit in his partial season (96 games) in 2007 are still his career high. If there's one thing Loney has been over the last three seasons, it's consistent:

Don't think I'm not rooting for Loney to get exactly four home runs and 10 RBI in 99 plate appearances the rest of this season, just for the statistical oddity. At this point, with Loney you pretty much know what you're going to get. The question is, is it good enough?

Loney is a slightly above average major league hitter overall, but among first baseman he is far below average. In 2010, for instance, all first basemen in MLB have a cumulative 121 OPS+. There are 20 players in baseball who over the last three seasons have started a total of 250 or more games at first base. Among those players, Loney ranks 19th out of 20, with a 103 OPS+. Only Casey Kotchman (88 OPS+) has been worse, offensively.

Offensively, it's hard to come to a conclusion other than that Loney is well below average among his peers at first base.

I wanted to believe Loney would turn the corner this season. Even though he slugged .399 last season, he also had a career-high 70 walks. However, it is looking more and more like last season was the outlier in Loney's patience at the plate: 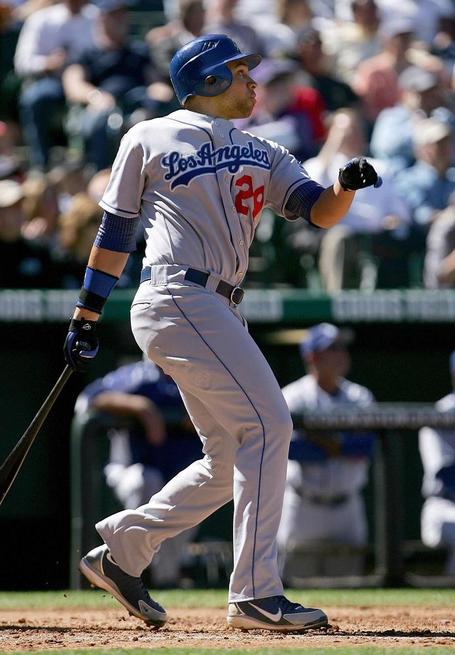 Joe Torre has often said that he likes James Loney as a hitter, and thinks the power will come, and in fact Loney has batted fourth or fifth in 108 of 134 games this season. Torre has also said that Loney is a productive hitter and that "production is all about RBIs," and after all Loney does lead the club with 80 runs batted in this season. However, while Torre has been involved in nearly 7,000 major league games as a player or manager, it doesn't mean he can't be completely wrong some of the time.

Yes, Loney does have 80 RBI this season, and he has hit well with runners in scoring position (.333/.416/.467 this year and .326/.405/.479 in his career), but that doesn't make him a productive hitter. Runs batted in are largely a function of opportunity, and in fact Loney has batted with 400 runners on base this season, more than anyone in the National League. He also batted with the seventh-most runners on base in the NL in 2009, and the fifth-most in 2008. The bottom line is that Loney gets his RBI because he has more runners to drive in than just about anyone else.

However, there is more to baseball than just hitting. Where Loney shines, at least superficially, is with the glove. I love watching him scoop throws at first base, or start a double play. But even if Loney is great, just how great is he? Is it enough to overcome his offensive deficiencies? Here are Loney's defensive numbers from a variety of sources:

Defensively, Loney looks to be above average, but certainly not near the top of the league by any stretch. So what we have in Loney is a well below average hitter for his position who is at or slightly above average defensively. What does that mean in total?

We have a few different sources for and a few permutations of Wins Above Replacement (WAR) in Fangraphs, Baseball-Reference, and Baseball Prospectus. Fangraphs is the only one that allows sorting, so the ranking among first basemen will be from Fangraphs. Here are Loney's numbers for the last three seasons:

Another factor to consider with Loney is that, while his offensive production has stayed the same every year, his salary has not. After making $411,000 and $465,000 in 2008 and 2009, respectively, Loney hit arbitration eligibility for the first time this winter, settling with the club for $3.1 million for 2010. He has two more seasons of arbitration eligibility left, and figures to make between $4.5 million and $5 million next season, if not more.

Is Loney worth $4.5-5 million next season? More importantly, are there better options for the money slotted to Loney? This past offseason, these four first basemen signed for contracts within that range:

That's fine for 2010, but what about next season? Thanks to MLB Trade Rumors, here's a list of available first basemen this winter, with their ages in parentheses:

I have excluded Branyan, LaRoche, and Albert Pujols because their options will likely get picked up, and I excluded Nick Johnson because I don't want a nephew of Larry Bowa giving him a reason to stick around. Looking at that list, the top players (Konerko, Pena, and Dunn) will all get multi-year deals, likely well above what the Dodgers are willing to spend. At a projected payroll of roughly $87 million next year even before filling left field and two or three spots in the rotation, I don't think the Dodgers plan to spend much more on a first baseman than what Loney is projected to make in arbitration. The rest of the list isn't really enticing, either.

Then again, Loney's perceived value in baseball probably exceeds his actual value, making him a prime candidate to trade this offseason. Perhaps if the Dodgers can move Loney for a starting pitcher, they might be more willing to spend on a first baseman.

Saying Loney has to go is one thing. Finding an actual replacement is another matter altogether. It's highly likely that we are in store for another year of Loney as our first baseman. The Dodgers just have to hope that in 2011, more than in 2010, the core players of the lineup, including Loney, simply have to perform better.