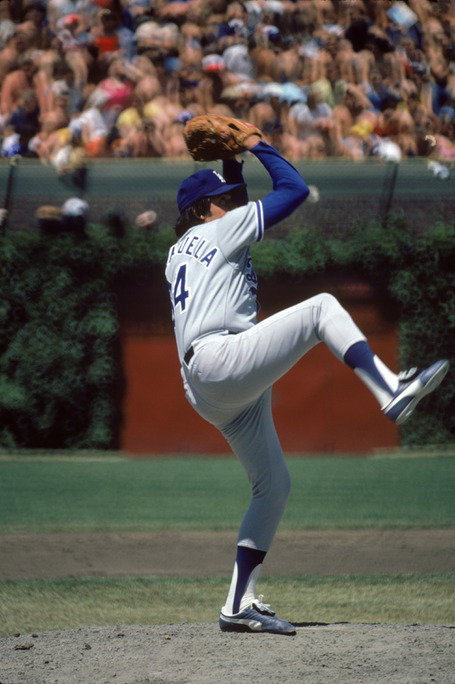 Yesterday we looked at the best 19 and 20 year old season for a position player and Adrian Beltre was clearly the winner.  Today we are going to look at the pitchers. Joe Moeller wasn't very good but he was the only 19 year old to qualify and he did have some interesting numbers so we should give him his credit. On the other hand the 20 year old season by Fernando was one for the ages, and stuff that legends are made of. If you were lucky enough to be cognizant in 1981 you enjoyed one of the greatest Dodger seasons ever, not just for the team but for the individual performance by Fernando. I'm not here to rank his season against the best seasons ever by a Dodger pitcher but Fernando Valenzuela was clearly the best 20 year old the Dodgers ever had, and quite possibly the greatest 20 year old anyone has ever seen this side of Bob Feller and Dwight Gooden. Couldn't help myself, I had to peak, using ERA+ as a guide it was the fourth best 20 year old season since the Dodgers moved west. Based on OPS against, I'd rank him 2nd.

Fernando led the league in starts with only 25 because of the strike shortened season. Led the league in CG, Shutouts, Innings Pitched, and Strikeouts at the age of 20 garnering the Cy Young, ROY, and placing fifth in the MVP voting. He also threw in a Silver Slugger award to cap off the greatest 20 year old season in LA Dodger History. How did he manage to win all those awards?

Their is a very real reason why Fernando is the most beloved Dodger alive today. You simply can't make up what he did in 1981.

Joe Moeller was the best 19 year old pitcher we have had but he wasn't very good. You could also point your finger at Moeller as a big reason why the Dodgers did not advance to the World Series in 1962. They ended the season tied with Giants and lost a playoff series. The 19 year old Moeller was forced to make 15 starts, which was one start too many. He had some solid games but in a period in June he was waxed five straight times. The lowlight of his season had to be June 29th, 1962 when the awful Mets pasted him for four runs in the first. He walked four of the first five hitters he faced. Ron Perranoski replaced him and did him no favors by walking three of the four hitters he faced. Perry was replaced by Phil Ortega who finally got the last out of the inning. The Dodgers ended up walking seven hitters that inning. Moeller's best game had to be April 23rd, a complete game 5 - 2 victory over a loaded Milwaukee Bravse team in front of all of 7600 fans.  I suspect Dodger fans expected big things from Moeller after seeing him make 15 starts as a 19 year old but it was not to be. He would have some success in 1964 but was out of baseball by the age of 28 even though in his last three years his ERA was never higher then 3.92.

Doyle Alexander was drafted in the ninth round of the legendary 1968 draft as an 18 year old and made his debut on June 26th, 1971.  Doyle would go onto pitch 19 seasons and be involved in one of the more interesting trades in the history of baseball, but in 1971 he was a Dodger.  He got off to a great start by pitching eight innings in his first game as the Dodgers beat the Padres 4 - 3. Doyle followed that up with a complete game victory 9 -2 for his first major league win. He gave up 12 hits in those nine innings and struck out only four. If you take a look at his game logs you will notice that the strikeout was not really in his repertoire.  Doyle would throw three complete games in August, winning all three games, while only giving up one run in each game. For a twenty year old he sure seemed to know how to pitch. Yet the Dodgers said good bye to Doyle and traded him during the off season for a HOF. I can remember being sad to see the young pitcher go, but Frank Robinson was one of my favorite players so I was not very upset. Frank Robinson was coming to town.

December 2, 1971: Traded by the Los Angeles Dodgers with Bob O'Brien, Sergio Robles and Royle Stillman to the Baltimore Orioles for Pete Richert and Frank Robinson

Clayton Kershaw surprised many by forcing his way into the rotation at the age of 20 but it was no surprise that he was solid in his debut season. While Kershaw was showing Vin Scully Uncle Charley in the spring and dominating the men in AA, my niece was in Mexico for a college class and one of her classmates had been a high school classmate of Clayton's so she had asked me about him. I was more then happy to let her know that Mr. Kershaw was the greatest thing since sliced bread and hopefully would be pitching for us soon.  Little did we know that a few weeks later he'd be making his debut and as luck would have it, Kalia was staying with us in a brief stopover in Los Angeles before heading home.  As with the other 127,000 plus Dodger fans who watched Clayton make his debut, we fell in love with him and have never stopped. Clayton may not be the best 20 year old in this series but I have a feeling he is going to find himself at the top of some future ones. It will be interesting to see who wins a few of the battles between Fernando and Clayton from age 21 - 23.