After a poor season on the field, and in light of the impending ownership auction, most of the recent coverage relating to the Los Angeles Dodgers has understandably been about moving forward, but I thought it would be worthwhile to take one final look back at every player that put on Dodger Blue in 2011.

Probably the best way to evaluate a player’s worth is by determining the value that his performance provided to the team in comparison to the amount of money he was paid. The resulting calculation is called the player’s surplus value and it’s an important factor when it comes to team success. Using that metric, we can get a definitive look at each individual player’s contribution to the team. 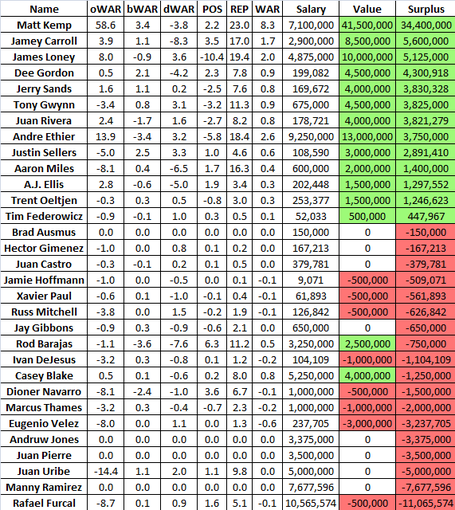 As you can see, all the players were evaluated using WAR, but not the WAR found on any site (tongue-in-cheek, you humorless saps). I used my own concoction that utilizes multiple sources and metrics that I think best determine value. For a full explanation of the process, check out the glossary here.