It has been 136 days since the Dodgers have collectively worn baseball uniforms in an organized fashion, but the time has come for them to do so again. Pitchers and catchers report to spring training today and while the first workout isn't here yet -- that will come tomorrow -- today marks the day we have been waiting for all winter. Baseball is here, again.

In the few hours that the Dodgers camp has been open, there has already been big news. Clayton Kershaw has been named the opening day starter, per Don Mattingly today. At 23 years, 12 days old on March 31, likely against Tim Lincecum and the Giants, Kershaw would be the fifth-youngest opening day starter in Los Angeles Dodgers history.

It's funny, last spring Kershaw was in the running for opening day starter, but the nod somehow went to Padilla, and it wasn't announced until March 25, 11 days before opening day. Here we are, 43 days before the opener this season, and we already know Kershaw will open the season on March 31. That's a comforting thought. 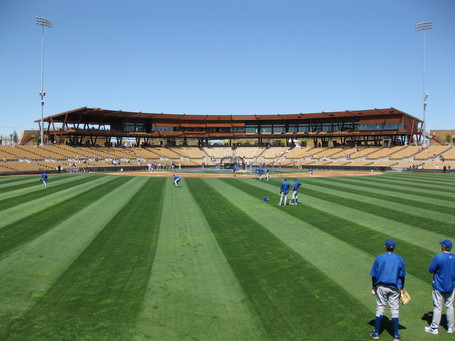 For those of you going to spring training this year, it will be a fun experience. Two years ago, I wrote about my first experience at Camelback Ranch, and JJ24 had a great fan post last month detailing the ins and outs of attending spring training. Here are a few general dates to remember: 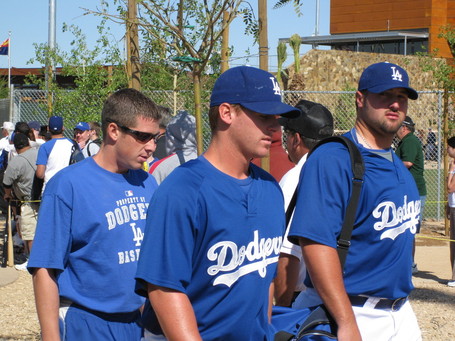 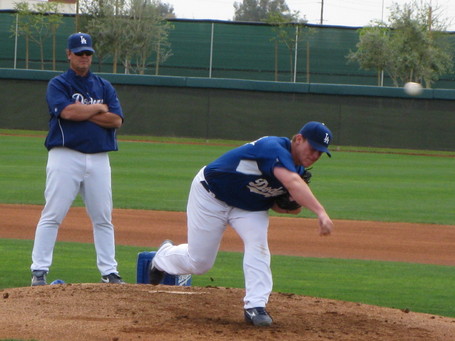 The Dodgers have 33 Cactus League games in 30 days, including one in Las Vegas on March 13 against the Cubs. The Dodgers play 17 games at Camelback Ranch; 15 home games and two "away" games against the co-tenant White Sox.

With pitchers and catchers reporting today, that means 35 players are set to check in to Dodgers camp today. The Dodgers open camp with five bona fide starters (Kershaw, Chad Billingsley, Hiroki Kuroda, Ted Lilly, and Jon Garland), and I'm sure Vicente Padilla would say there are six starters. Whatever Padilla's role shall be, that makes six locks for the opening day roster. Add in Jonathan Broxton, Hong-Chih Kuo, and free agent acquisition Matt Guerrier, and that brings us to nine pitching roster locks. 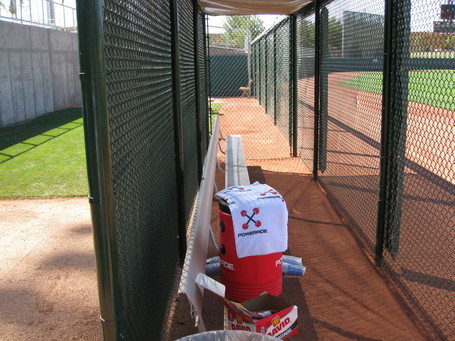 As for the other three bullpen spots:

[Belisario's agent Paul] Kinzer said he didn’t think Belisario would be able to enter the United States at any time this year. “Unless some things change drastically, I’m not very optimistic at this point,” Kinzer said.

Ramon Troncoso and Travis Schlichting will be in the mix for bullpen spots as well, but both have options and are likely further down the depth chart. Similarly, John Ely and Carlos Monasterios are down the depth chart as starters, but will likely start in Triple A, barring injuries. Jon Link is in the mix as well, and while he is being stretched out like a starter, he could be a bullpen option if a need arises at the major league level. 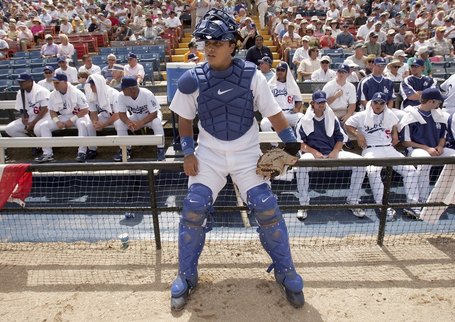 As for the catchers:

JD Closser and Damaso Espino are the other two catchers in big league camp, and are both on minor league contracts.