Rubby News Day: Who Could Bang A Hit Off You?

Share All sharing options for: Rubby News Day: Who Could Bang A Hit Off You?

David Young and I have been covering spring training for two days, and the Dodgers have two wins. Coincidence? Yes, very much so. The Dodgers captured their third straight Cactus League victory with a 6-3 win over the Giants at Scottsdale Stadium. Rubby De La Rosa started the game off right for the Dodgers, and a pair of guys fighting for a roster spot ended it in style.

De La Rosa, the organizational minor league pitcher of the year last season, started the game and threw four no-hit innings. He did walk three of the 14 batters he faced, and struck out two. Those were the first three walks of the spring for De La Rosa, who has struck out seven in his 10 Cactus League innings, putting up a 1.80 ERA.

Still, as the regular starting rotation begins to get stretched out into longer outings, there are limited innings for De La Rosa to pitch going forward. Don't be surprised if he is reassigned to minor league camp soon. 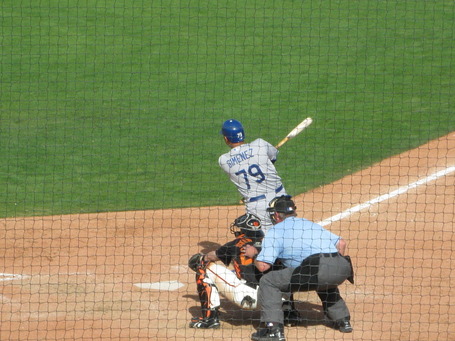 The Dodgers were up 4-3 in the ninth inning when Hector Gimenez struck again, hitting his second home run in as many days, crushing a pitch from Guillermo Mota (see left) over the right field wall. In his last five plate appearances, spanning four games, Gimenez has three home runs and a double. He did not start the game, but entered the game in the seventh, playing the final three innings at first base. Gimenez has played 30 innings at first base this spring.

Xavier Paul, who like Gimenez is out of options, followed with a home run of his own off Mota, to right center field. For someone who began the spring with eight strikeouts in his first 13 plate appearances, Paul has had a very quietly effective spring. Of course, as is always the case with small sample sizes and spring stats, take these with a grain of salt, but in 35 plate appearances this spring Paul is hitting .313/.343/.625.