For Starters, Dodgers Earning Their Keep Early On

Share All sharing options for: For Starters, Dodgers Earning Their Keep Early On

The Dodgers play their first night game of the spring tonight (one of four night Cactus League games for the Dodgers on their schedule), against the Reds at Goodyear Ballpark. The Dodgers were also here on Tuesday to play the Indians, who share the facility with their Ohio brethren. Sure, it's spring training, and early in spring training at that, so stats should be taken with considerable grains of salt, but the Dodgers' starting pitchers have yet to give up an earned run this spring.

Ted Lilly pitched two more scoreless innings today, but that was in a B game this morning against White Sox minor leaguers, so those stats don't get included with the other stats that don't count. Lilly, who was scratched from his start yesterday with the flu, threw 27 pitches in his outing this morning and retired all six batters he faced. Lilly is expected to pitch again on Monday, keeping the five-man starting rotation in its current order.

Will Hiroki Kuroda continue the streak tonight against the Reds?

Travis Wood starts for the Reds, and is scheduled to be followed by Matt Maloney, Sam LeCure, Francisco Cordero, and Aroldis Chapman. The fireballing Chapman didn't face the Dodgers in his rookie season last year, but he did pitch two scoreless innings at Camelback Ranch last spring against the Dodgers.

The Dodgers help an open tryout this morning at Camelback Ranch, and from the tryout singed one player to a minor league deal: Randy Keisler, the left-handed pitcher who pitched for five teams in parts of six seasons, the last in 2007 with St. Louis. Keisler pitched with the Laguna Vaqueros in the Mexican League last season.

The Dodgers announced today that they will be selling Dodger Dogs for $1 at the Memorial Day (May 30) game against the Rockies at Dodger Stadium.

On July 2, the Reds are giving away this awesome Dusty Baker bobblehead doll which also doubles as a toothpick holder: 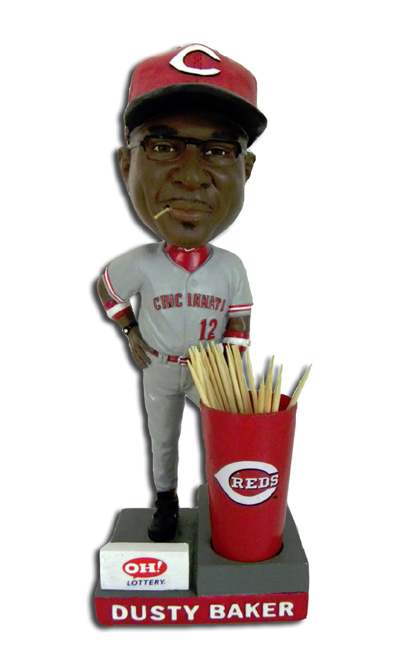 In case you missed it yesterday, I was interviewed by Howard Cole of Baseball Savvy.

TV: None; radio only tonight