Share All sharing options for: Reeling Dodgers Get Thumped By Cardinals Again

A subpar outing by Clayton Kershaw and another poor night by the Dodger offense led to another St. Louis steamroll over the Dodgers. The Cardinals walloped the Dodgers 9-2 at Dodger Stadium on Friday night, dropping the Dodgers to their fifth straight defeat. The Dodgers have been outscored 29-9 in the first three games of the series.

The decision to bench the red-hot (six home runs in his last five games, all against right-handed pitchers) Lance Berkman -- the switch-hitter batting .202/.275/.345 against lefties since the beginning of 2009 -- in favor of Allen Craig really paid off for Tony LaRussa. Craig, a right-handed batter, had three hits, including the three-run home run in the fifth inning that was the knockout blow for Kershaw.

Despite the losing streak, manager Don Mattingly still feels the reeling Dodgers, losers of five straight and at 6-9 owners of the worst run differential in the National League, can contend. "There's nothing that's happened to this point, to this day, that is going to change my mind on this club," said Mattingly, an unflinchingly positive sort who seems like he, if tied to railroad tracks, would praise an oncoming train for the light it provided.  "Our guys are still being aggressive on the bases, [Xavier] Paul throws a guy out, Casey [Blake] takes third base. Guys are still going hard. We're in trouble if guys quit doing that, and we're not there at all."

Yes, the absolute refusal by home plate umpire Joe West to call the low strike tonight didn't do Kershaw any favors tonight (this is through the fifth inning tonight, courtesy of the great Brooks Baseball; red points are strikes, green points are balls)... 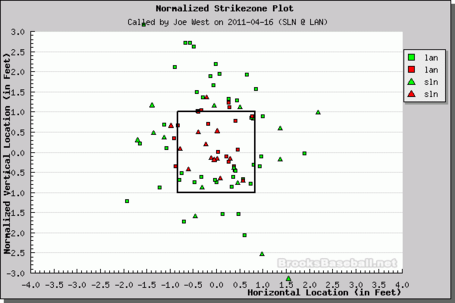 ...but Kershaw also gave up a ton of foul balls, which in combination with the tight strike zone was a killer on his pitch count. Kershaw threw 111 pitches in his 4 2/3 innings, of which 66 were strikes. However, 31 of those pitches were hit foul by St. Louis, a whopping 47% of his strike total. Coming into tonight's start, Kershaw had allowed 54 foul balls in three starts, an average of 18 per start. His foul balls in both 2011 and in Kershaw's career had comprised 28% of his strike total before tonight.

Give credit to both Kershaw and Mattingly, who had nearly identical quotes when asked whether or not Kershaw was getting squeezed.

Kershaw: "There's no point in talking about it now, it doesn't make any sense."

Mattingly: "You know, it's not even worth talking about."

Not a punishable word from either one.

The Dodgers had an announced crowd of 31,614 at Dodger Stadium tonight, but as usual that number seemed high. Check out the large sections of empty seats visible here (click to enlarge)

Without physically counting each person at the stadium individually, all we can track is tickets sold, which is what the announced figure tonight of 31,614 represents. As Bill Shaikin of the Los Angeles Times noted, that is the lowest Saturday night crowd at Dodger Stadium since September 7, 2002, against Houston. Shaikin also tweeted earlier tonight that Friday's announced crowd of 36,282 was the smallest since June 6, 2003.

It seems to me that the Dodgers are nearing a perfect storm of negativity, which has hurt the attendance, both in tickets sold and actual butts in seats. The club is struggling on the field, the perception of the safety at Dodger Stadium has reached a low point after the opening day incident, the economy still is in the tank, and there are a growing number of fans fed up with all things McCourt. It will be interesting to see just how attendance looks going forward should the team continue to suffer on the field.