The next stop on my Dodger minor league stadium tour took me to Albuquerque this past weekend, where I got to watch the Isotopes play the New Orleans Zephyrs on an overcast Saturday night.  My previous minor league experiences include my visit to the Rancho Cucamonga Quakes earlier this year, and last year's trip to the former Dodger affiliate the Inland Empire 66ers.  As always I had an outstanding time, and I must say that this was the most impressive minor league stadium I've been to thus far.  The staff was extremely nice and helpful, and if anyone happens to be in Albuquerque during an Isotopes home game this place is a must see.  Even if you don't have any plans to go to New Mexico, I would recommend a 2 to 3 day trip at some point to catch a game since the flights are short and relatively cheap, and the city has enough to offer to keep you busy for the remainder of your time in Albuquerque. 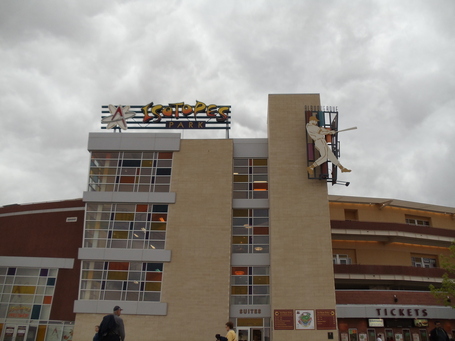 Located right next to the University of New Mexico campus, "The Lab" opened in 2003 and has a capacity of 13,279.  There are 11,124 seats, but then there is a big grassy hill/berm area in right field where people can sit on blankets.  Behind that hill is the "Fun Zone" with has a carnival-like theme with games and rides for kids.  In center field there is a forest area included in the batters eye which looks really cool, and beyond left field there is a picnic area.  The Isotopes share the field with the Lobos baseball team, which means that Brian Cavazos-Galvez played on this field during his college years. 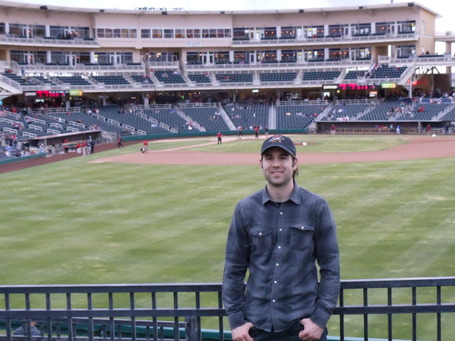 The game I attended had 12,171 on hand, which I thought was a big crowd for April.  However, there were a few factors that contributed to the big number including the fact that the game was on a Saturday, this was the first game of a homestand, and most importantly that this was firework night.  In addition, with no professional sports teams in town, the Isotopes' games appear to be the hot ticket among sporting events. 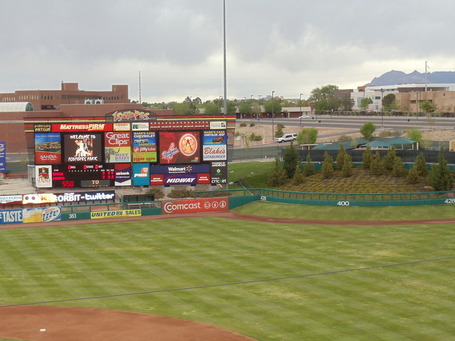 I only stayed in the press box for a few innings because I was there with friends and we had seats right behind the plate.  The seats were only $12 a piece and the view was outstanding.  The players interact with fans before the game, and the environment is very relaxed.  I also had an Isotopes Summer Amber beer, and it was very good. 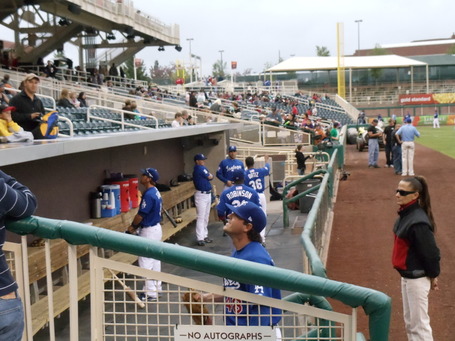 The Isotopes are much more interesting this year in terms of prospects when compared to the past few years.  The team currently features three top 10 prospects according to Baseball America in Dee Gordon, Trayvon Robinson, and Scott Elbert, and obviously recently lost a fourth top 10 guy in Jerry Sands.  There are also several marginal prospects like Jon Link and Jamie Hoffmann who have already seen time with the Dodgers, and there are a ton of guys on the team with major league experience.

In terms of starting pitching there wasn't really anyone in particular I wanted to see because the Albuquerque rotation doesn't really have any prospects, so I was OK with the fact that lefty Alberto Bastarto was the starter.  Bastardo was originally signed by Baltimore in 2002 and has been in the Dodgers organization since December of 2005 when he was picked in the minor league portion of the Rule 5 draft.  Bastardo doesn't throw very hard at all - the faster I saw him clocked at was 88 - but he uses his offspeed stuff effectively and kept guys off balance.  I personally don't think the 27 year old will ever make it to the big leagues, but he is a perfect AAA pitcher in that he keeps the team in the game and puts up decent stats.

Here a few few photos of the players during the game, starting with the left side of the infield (Russ Mitchell and Dee Gordon): 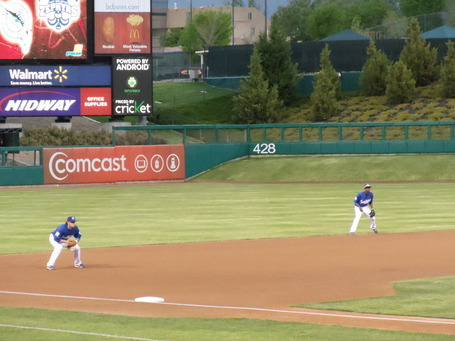 Dee at the plate: 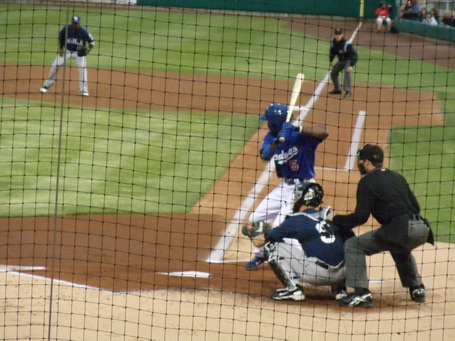 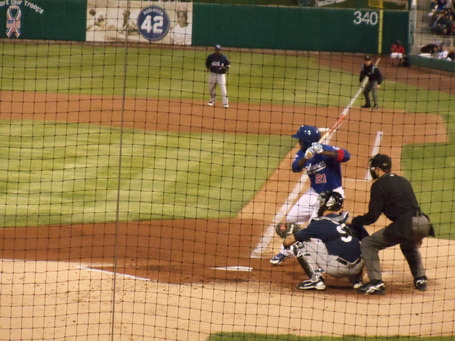 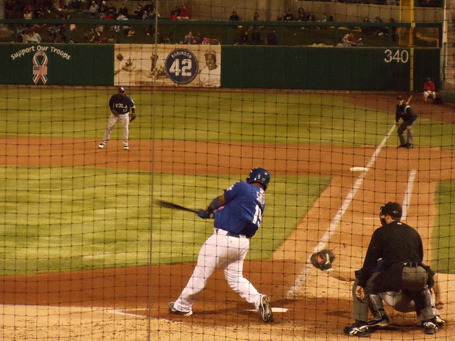 There aren't as many notes about AAA players since I've already seen most of these guys play at some point, mostly at spring training.  However, here are a few thoughts I wrote down while watching the game:

- Dee Gordon really does have game changing speed, which was on full display when he scored from 2nd base on a passed ball.

- Gordon made an outstanding defensive play in the 2nd inning as he ranged way up the middle to grab a ground and then made a spinning throw to 1st.  The guy was safe as the throw was just a bit late, but just making it a close play was impressive because most shortstops wouldn't even get to that ball in the first place.

- Speaking of Gordon's defense, there were a couple of other plays where he again made a great play by getting to the ball, then was just late on the throw.  All those plays were of course ruled hits, but I can see how he picks up more errors than other shortstops because he gets to those tough balls and then makes an off balance and errant throw to 1st.

- Trayvon Robinson looked locked in at the plate all game long, and his triple went at least 390 feet to deep right-center field.

- Roman Colon came in with a huge lead and allowed 4 runs, but was reaching 96 mph on the gun

Here are a few last photos of the night, starting with the team's mascot Orbit: 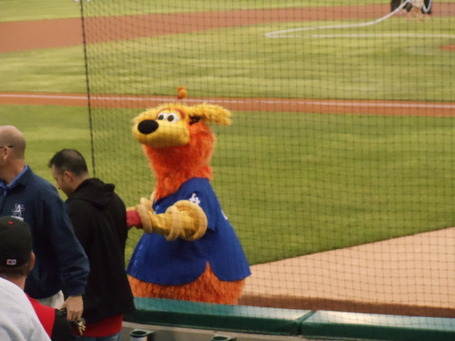 The Fun Zone beyond the outfield: 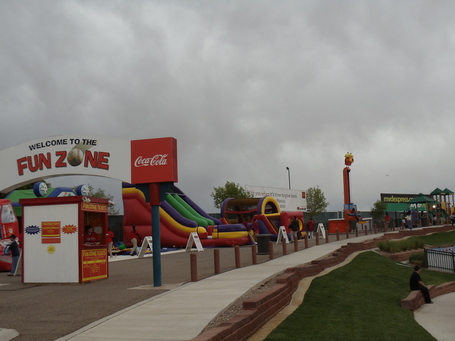 Close up of the scoreboard: 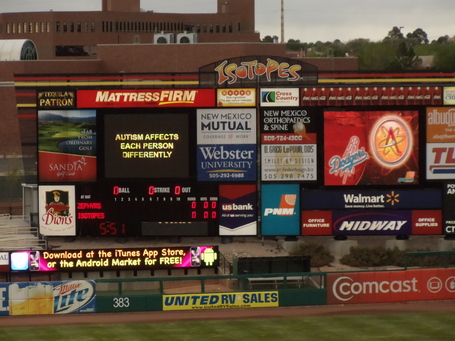 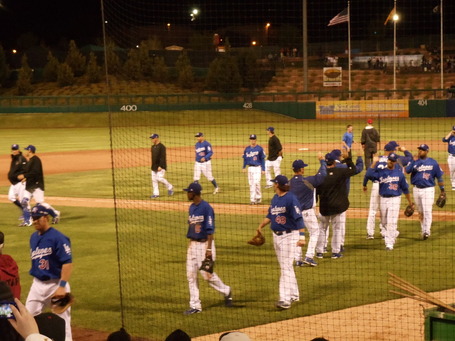 The Stadium at night: 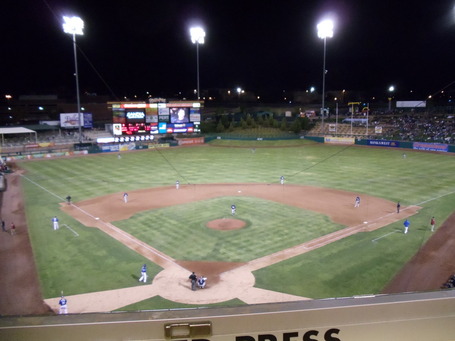 And finally, here are a few videos courtesy of one of the guys I went with, Jeff Anderson.  Like last time they take a while to load, but hopefully they are worth watching: