Dodgers Week 1 In Review: Starting Off On The Right Foot

Share All sharing options for: Dodgers Week 1 In Review: Starting Off On The Right Foot

The Dodgers opened their season with the rival Giants, and got things off to a good start, winning three out of four games. The season starting mid-week has thrown things off a bit, and we open with a "week" that is really just a four-game weekend set. But whatever it was, it was good for the Dodgers.

Dodger Batter of the Week:  Matt Kemp is the clear winner here, as he was the offensive star of the opening four game series. Kemp hit .417/.533/.833, which blew everyone else away, and he had three of the seven Dodgers' extra-base hits and three of the nine Dodger walks. The Dodgers have one home run and one stolen base through four games, and Kemp has them both.

Dodger Pitcher of the Week: Just as Kemp was the easy choice for batter of the week, Clayton Kershaw is the clear pick for pitcher of the week. Kershaw was magnificent on opening night, throwing seven scoreless innings, allowing just five baserunners while striking out nine. 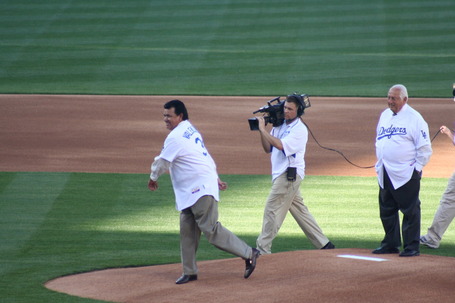 Southpaw Starters Two Decades Apart: Kershaw made his first career opening day start on Thursday night, and was the first left-hander to open the season for the Dodgers since Fernando Valenzuela in 1988. That season ended pretty well for the Dodgers. Valenzuela actually opened this season too, throwing out the ceremonial first pitch to a loud ovation before Thursday's game.

Taking One For The Team: Lance Cormier had a 6.00 ERA for the week, but I considered making him an honorable mention for pitcher of the week. Why? Well, because the Dodgers were down 8-0 on Saturday after six innings, and relievers Mike MacDougal and Kenley Jansen were already used. The Dodgers needed somebody to eat up innings at the end of the game to preserve the bullpen, and Cormier obliged. He threw 42 pitches and allowed two runs, but he got through those three innings without the Dodgers having to burn another reliever. "You hope you don't need it," Mattingly said of the mopup work, "but when you get it, it saves your bullpen." In fact, the Dodgers went into Sunday night with a full compliment of relievers available (outside of Jansen and Cormier).

Transactions: None this week, the first week of the season, but the Dodgers did open the year with five players on the disabled list: Casey Blake, Vicente Padilla, Garland, Jay Gibbons, and Dioner Navarro.

Upcoming Week: After four games at Dodger Stadium, the Dodgers head out for an eight-game road trip through most of the NL West. This week brings trips to Colorado and San Diego, but also brings two off days, the only non All-Star week this season with more than one off day.