A Fun, And Long, Night In Lancaster With The Rancho Cucamonga Quakes

Share All sharing options for: A Fun, And Long, Night In Lancaster With The Rancho Cucamonga Quakes

At 22-29, the Dodgers aren't giving fans much to be confident in. Sure, Casey Blake and Blake Hawksworth should be activated Friday, coupled with the return of Andre Ethier and Rod Barajas to the starting lineup, so there are reasons for hope. Rafael Furcal is bound to improve from his sluggish (1-for-18) start since returning from the disabled list, too.

But with a lot of work needed at the major league level, I want to turn our attention to the minor league level. Last night, I went to Lancaster for the first time to Clear Channel Stadium to watch the Dodgers' Class A affiliate, the Rancho Cucamonga Quakes, take on the Lancaster JetHawks, in the Astros' chain. What I saw, on a cold, windy night in Lancaster, was a classic California League game, the most runs in a game I have ever seen in person, my first cycle, and a very nice pitching performance from one of the Dodgers' top pitching prospects. 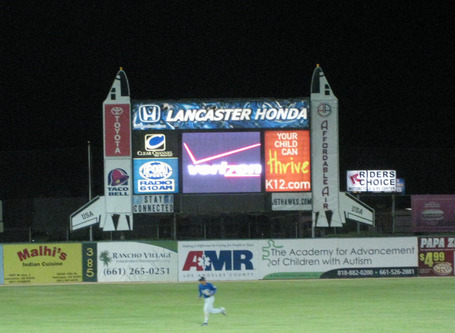 I met frequent True Blue LA commenter and all around good guy NotJoeTorre at the game, which was started for Rancho Cucamonga by Dodgers' reliever Hawksworth, on the second and final game of his rehab assignment. Hawksworth threw 17 pitches in his one inning of work, 11 for strikes. He struck out two, one looking, and threw a couple of nice curveballs. He did allow one hit, a booming triple off the wall in center field to diminutive second baseman Jose Altuve, but more on Altuve in a bit. Hawksworth is expected to be activated Friday night when the Dodgers open up a homestand with Florida. 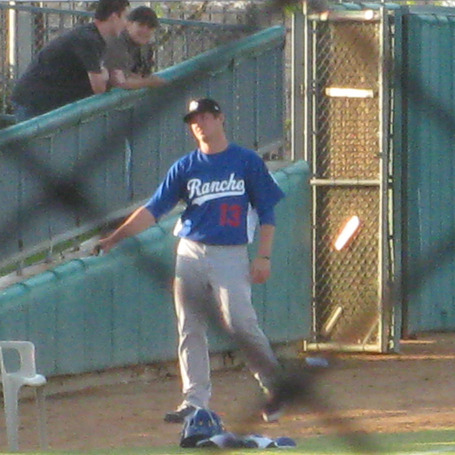 Following Hawksworth to the hill was Ethan Martin, voted this offseason by True Blue LA readers as the Dodgers' number 10 prospect (Brandon Lennox ranked Martin at number seven). From my vantage point, just behind the first base dugout, Martin's stuff looked good. I was not able to see any radar gun readings, but hitters were late on his fastball all night, and he was also keeping hitters off balance with his curve and changeup. Through five innings of work, the soon-to-be 22-year old Martin allowed only four hits and a walk, and no runs, while striking out seven. He was totally in command.

The Quakes were up 5-0 after six innings, but the game was nowhere near over. They added five more runs in the top of the seventh, a half-inning that seemingly took forever. I wasn't keeping track, but that half inning had to be at least 25 minutes long. I looked up at one point and saw somebody warming in the bullpen, but it was just Martin, trying to stay loose as the inning went on and on.

After the long layoff, Martin walked the first two batters of the seventh inning, which prompted a visit from pitching coach Hector Berrios. However, Martin walked his next batter too, which ended his night. Reliever Javier Solano came in and allowed a grand slam to his first batter, Jonathan Villar (one of three players the Phillies sent the Astros for Roy Oswalt). If you look at Martin's line on the night (5 IP, 4 hits, 3 runs, 3 walks, 7 strikeouts), it doesn't tell the whole story of just how dominant he was for those first five innings. 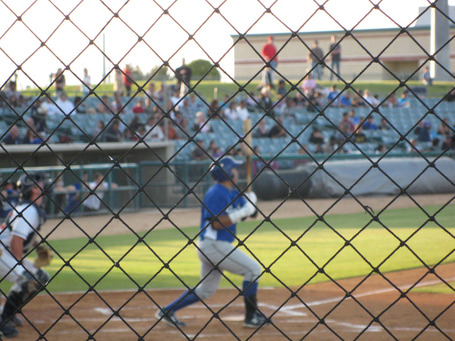 Now, to the offense. Angelo Songco, rated by Lennox as the Dodgers' 31st best prospect heading into this season, had himself a game. He doubled in the first inning (pictured, left), singled in the fourth and fifth innings, then homered in the seventh. Needing a triple for the cycle, Songco struck out to end the seventh inning. After the JetHawks cut the lead to 10-5 in the bottom of the seventh inning, the Quakes rallied for four more runs in the eighth inning, during which the 22-year old Songco got another chance for the cycle. He hit a very deep fly ball to center field, but it was caught at the warning track.

Due up ninth in the top of the ninth inning, surely Songco wouldn't get another chance, would he? Oh yes, he would. Now up 18-5, with still only one out in the inning, Songco came to the plate with two runners on, and crushed a ball to dead center. The ball bounced and at first appeared to hit the batters eye (which is beyond the fence and out of play), but that wasn't the case. Songco, smelling a cycle, was thinking three out of the box, and made it to third base easily.

That made the score 20-5, but amazingly this game featured nine more runs! The Quakes hit five home runs, including three in the ninth inning. They scored 11 runs in the top of the ninth, pushing their lead to 25-5, but Lancaster added four more runs in their half of the inning to provide this wild line score: 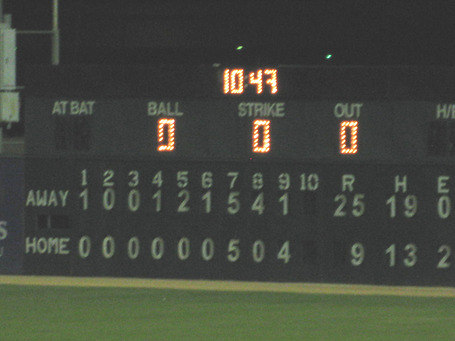 If only Rancho Cucamonga had scored in the second and third innings. The attendance was 3,387 last night, the vast majority of which were kids and their families, as the JetHawks have a midgame promotion in which kids get to run on the field, from right field to left field. At the end of the three hour, 42 minute game, there were fewer than 100 fans left in the stadium, but had Lancaster scored just one more run we all would have received two free tacos from Jack in the Box. I'm not sure if I won or lost here.

Here are some other random notes from the game

All in all, it was a fun, and long, night in Lancaster. Ethan Martin and Angelo Songco, and that final score, made it a night to remember.