A pair of Dodgers on rehab assignment highlighted the Class A Rancho Cucamonga Quakes' 6-1 win over the High Desert Mavericks on Thursday night. Juan Uribe and Blake Hawksworth, two of eight Dodgers currently on the disabled list but both close to returning, started tonight's game. Unlike Miami tonight, the Quakes were able to hold their lead on the Mavericks.

Uribe had two singles in four at-bats in the first game of his rehab assignment, and played six innings at second base. Uribe, who has a strained left hip flexor, looked fine running the bases tonight. His first single was a slow ground ball in the hole between third base and shortstop, and Uribe easily beat the throw to first base. He then ran first to third on a single to right field, and scored without a throw on a sacrifice fly. Uribe is eligible to be activated as soon as Sunday.

The Quakes wore sleeveless white uniform tops tonight, with blue undershirts. Most everyone wore their sleeves at their elbow or longer, like so: 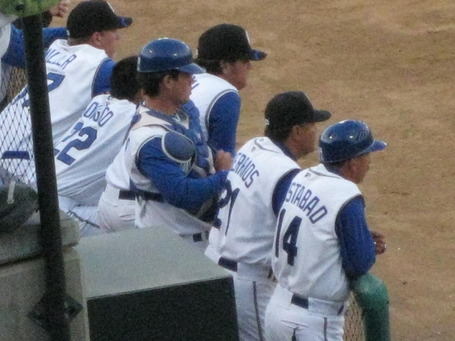 However, Uribe nearly attempted the full Ted Kluszewski with his undershirt: 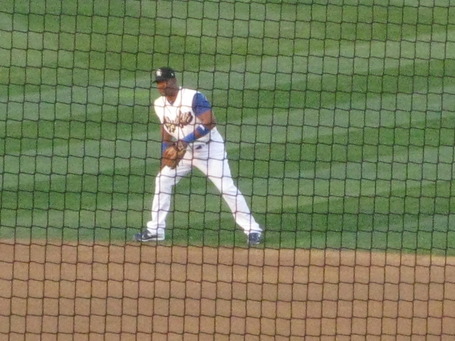 Hawksworth started the game, his third appearance with the Quakes in the last 11 days. The Dodgers reliever, who has been sidelined since May 11 with what was first thought to be a strained right groin but turned out to be a hip impingement, allowed one hit, a single up the middle, in a scoreless inning of work that also featured to pop outs to shortstop and a groundout to third base. Hawksworth threw 16 pitches, 10 for strikes.

Hawksworth threw fastballs for 13 of his 16 pitches, averaging 95.2 mph according to the stadium radar gun. My first thought was that the radar gun seemed high, especially when Hawksworth threw one pitch at 100 mph, but he is averaging 95.1 mph in the majors this season (per Fangraphs), so perhaps it's not so out of line. 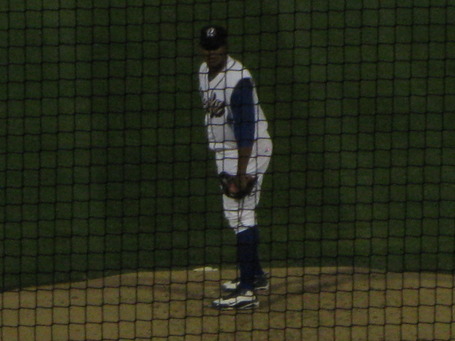 For the second time in two Rancho Cucamonga games I have attended this season, the pitcher after Hawksworth was worth the price of admission. Arismendy Ozoria, the 20-year old minor league hurler with a major league name, pitched five innings, allowing only one run, on a long home run by first baseman Vince Catricala in Ozoria's final inning. Ozoria, who turns 21 on August 7, was consistently in the low 90s with his fastball, hitting 93 on several occasions and throwing 94 mph at least once. He also flashed a slow curve between 73-75 mph that he threw at least four times for strikes (plus one wild pitch). The 6'1", 185-pound right-hander from the Dominican Republic, whose body type reminds me of Octavio Dotel, struck out six and allowed six baserunners (three hits and three walks).

Greg Wilborn, who was activated today after being sidelined for three weeks with a left elbow strain, pitched the final three innings without allowing a hit, picking up the first save of his professional career.

Nobody hit for the cycle tonight, and the game didn't feature 34 runs scored, but Gorman Erickson did hit a double and a home run for the Quakes, who snapped a three-game losing streak and increased their Southern Division lead over High Desert to five games.

For the second time in my two minor league games this season, the fans came within one run by the home team of getting free tacos. Last Tuesday, Lancaster scored nine runs in defeat but needed 10 runs to earn their fans free tacos. At Rancho Cucamonga, at a relatively less lunar environment, the threshold for tacos is seven runs.