After a pair of one-sided affairs in Anaheim, Sunday night's finale between the Dodgers and Angels was a pitchers duel. Chad Billingsley was cruising until the seventh inning, when he allowed three runs, the final two coming on a bomb by Russell Branyan to right center field, giving the Angels a 3-1 victory and yet another interleague series win over the Dodgers.

Billingsley was cruising through six innings, having allowed just one hit and two walks, and threw just 68 pitches. Staked to a 1-0 lead, Billingsley allowed a leadoff double to Bobby Abreu to start the seventh, then threw w wild pitch to advance Abreu to third base. An RBI groundout by Vernon Wells scored Abreu, but then Billingsley hit Howie Kendrick with a pitch. With two outs, up stepped Branyan, who had 13 hits in 87 at-bats -- hitting .149/.219/.195 -- since his last home run, on April 13.

Billingsley ended up pitching eight innings and allowing just three hits, suffering the complete game loss. The last complete game loss by a Dodger was by Derek Lowe, who lost to Washington on August 26, 2008.

There was a bizarre play in the top of the eighth inning where Matt Kemp Armbristered a ball in front of the plate. Kemp was called out for batters intereference, a call that manager Don Mattingly argued, saying that Kemp was still in the box. However, after seeing the replay after the game, Mattingly agreed with the call. "I think Matt's swing took him out in front of home plate," Mattingly said.  "At that point, the catcher didn't have anywhere to go, so the call was right at that point."

Dioner Navarro, hitting .175/.232/.262 this season, pinch hit again in the ninth inning tonight, his 10th pinch hitting appearance of the season. At least this time it was for another catcher (A.J. Ellis) and not Jamey Carroll, which was the case Tuesday in Minnesota. "I just looked at it like it's a numbers thing," Mattingly said after the game, also bringing up Navarro pinch hitting for Carroll on Tuesday. "Matchups were better facing the lefty, and he has a chance to hit a ball in the seats. Maybe not a great chance, but he's got a little better chance than Jamey."

Low Point Of The Season?

The Dodgers are now at 11 games under .500 for the first time all year, but the low point of the year may have occurred after the game. Several ex-Angels and ex-Dodgers participated in a charity softball game on the field after tonight's game, all for a great cause, raising money to fight ALS, aka Lou Gehrig's Disease. To honor Gehrig, all players wore either Angels or Dodgers uniforms with the number 4 on them, Gehrig's number.

Before the softball game, Tim Salmon and Jose Canseco took part in a home run contest, which would have been fine except for the fact the Canseco was wearing a Dodger uniform! Canseco was never a Dodger, save for taking part in an open tryout at Vero Beach in 2004. Yet, here we are in the same year that Duke Snider died and we have to see Jose Canseco wearing his uniform. 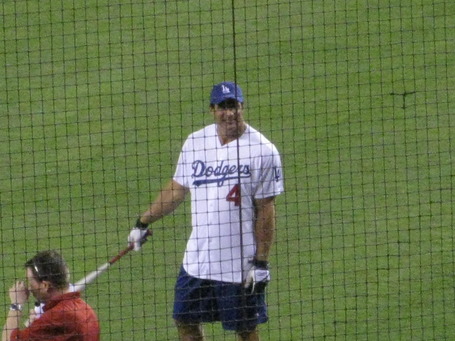