For a while it looked like Dave Righetti* might have a partner, as Rubby De La Rosa didn't allow a hit for the first five innings. However, the Mets tallied four hits in the sixth inning, including three RBI doubles down the right field line to beat the Dodgers 5-2 in the opener of a three game series at Dodger Stadium. It was the second straight solid outing for De La Rosa, who pitched seven innings for the second straight game, allowing just those three runs.

Those three runs in the sixth inning turned a 2-0 Dodger lead into a 3-2 deficit, once that ballooned to 5-2 in the eighth thanks to a combined three hits allowed and a hit batter by Scott Elbert and Matt Guerrier. The pair of tallies in the eighth inning were the first runs allowed, inherited or otherwise, by the Dodgers bullpen in nine days.

When the Dodgers lose an opening game of a series this season, they are 2-10-2 in those series.

*Righetti is one of three pitchers to throw a no-hitter on July 4, having done so for the Yankees on July 4, 1983. The others were Hooks Wiltse of the Giants in 1908 and George Mullin of the Tigers in 1912.

The lineup card looked a little weird tonight, as they had players wearing uniform number five (Juan Uribe), number six (Aaron Miles), and number seven (James Loney) batting fifth, sixth, and seventh in the batting order. A stroll through the Play Index and game logs at Baseball-Reference.com showed that the last time the Dodgers had five, six, and seven batting five, six, and seven was on July 23, 1968 against the Astros, when Jim Lefebvre, Ron Fairly, and Bob Bailey played second base, left field, and third base, respectively. Bailey led off the sixth inning with a home run to tie the game at 1-1, a game the Dodgers would eventually win 3-1, behind Claude Osteen's complete game.

Thanks to discount tickets and the promise of a spectacular fireworks show after the game, the Dodgers had their second sellout of the season tonight. It was cool and rare this season to hear a full stadium cheer when the Dodgers did well, but of course the flip side of that is hearing 56,000 boos, as Guerrier did in the eighth inning. Here's a shot of the stadium after the game as fans were on the field awaiting the fireworks: 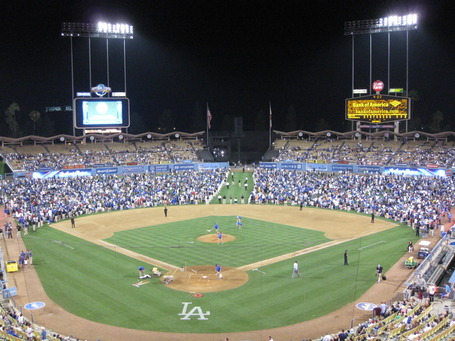