Kevin picked out a great field for us but in the beginning I was swearing at him in all the languages I know. Tiss was a bit of a walk with heavy goods as our guide took us down the ramp and headed for another field when boom, we turned right and realized that we simply needed to walk down the steps from the parking lot to the field we were at.

Lesson learned made the other four trips to the truck much easier and when HJ grabbed my table like a surfboard it was good to go. A large tree was stationed perfectly for shade but it sure didn't hurt to have David bring his portable shade. After brief introductions we grabbed our gloves and started playing catch.

Then came time for big decisions, do we eat first or play first? The players won out so then the 2nd big decision came up. How do we pick teams? . At first it looked like we were going to abandon the whole 40 and over against the kid crew but when it looked like we might pick teams, I quickly intervened. I was gravely afraid that I'd be the last player chosen so I had to act fast or else be forever embarrassed in front of my wife.

We asked everyone over 35 to step away and lo and behhold we had the making of a team. Once I checked to see if our friend Patti wanted to play we got closer, Then Craig said he'd play and we got even closer. Kevin volunteered leaving us one short of a full squad. Someone said that Josh (Delias) acted like an old guy and so he joined the over-the-hill-gang and the teams were set.

After going down meekly in the top of the first the OTHG took the field with following setup:

Maddz led of with a one hopper to Phil who threw it away. Then someone else did something and Phil once again threw it away. Eric stomped off the mound and wouldn't come back until they put Phil in the outfield and replaced him with Kevin. From then on the defense was solid but damage had been done as the Kid Core put up five runs in three innings.

Maddz pitched for the tiny tots and shut us out for two innings before we broke through for three runs in the 3rd. With three innings in the book we shut down the game for food with the score 5 - 3 in favor of the bad guys.

The real story of the day was the food, sadly I did not take good enough notes to properly credit everyone. I do know Marty showed up right then with some awesome Chines Chicken Salad, and some chicken grilled thighs that ended up being my dinner last night. Nolander brought a delicious Mac/Cheese, GrimJack some bratwurst that he cooked on the spot, two fruit salads, HJ some fancy pork name, Craig with cookies and maple nut bars, and.............so much more, feel free to contribute in the comments.

We ate and ate and then someone made us get up and continue the softball game. I didn't think we'd be able to play without barfing in the heat after eating so much but most trudged back out there. Eric and Craig decided they had had enough so the OTHG was down to eight which gave us a three man outfield. At some point the kid corp scored a mess of runs and I stopped keeping track of the score.

Then divine intervention intervened as she tends to due when things need to be set right. Maddz declared she was done pitching, so Michael White took the mound and we slowly started chipping away with a run here and there. Eventually we had played enough that when we came to bat we were told this was the last inning. I'm sure the Kid Core expected a quick inning and then back to the food, but it was not to be.I think at this point the Kid Core led in the game 13 - 7 or something close to that.

It was all a blur as I sat with Eric and Craig in the shade in between pinch running for our various players who could not run. I think David and I pinch ran and scored around five runs that innings, HJ hit a home run, more runs scored, and next thing I knew we were having a HUGE inning. We'd hit the ball they would make an error, I'm not sure that more then five hits were legit that inning but combined with the porous defense we climbed back into the game and eventually found ourselves with the winning run on 3rd base with two outs. With all the grief I've given Jamey Carroll it would have been Karma for me to make the last out but instead of Carrolling it, I Sellers it and drove in the winning run with a line drive into left field. We scored one more time so the OTHG took the field with a 15 - 13 lead. The Kiddie Korp quickly scored one run and it was 15 - 14. They got a runner to 3rd base. It was tense, and then it was over, as the last hitter drilled a line drive that looked headed for CF until Kevin's catlike reflexes reached down and snagged it for the final out.

With Grimjack playing 3rd someone whacked a shot at him that he deflected to David at SS who threw to Josh at 2nd for a force out.

David playing a graceful CF catching anything hit his way

Kevin, HJ, Josh, Patti combining to be a shut down infield defense in innings two and three

Nolander fighting a tough sun in LF shoe stringed a bloop for the very first out of the game.

G Scott snagged a line drive that was hit with such brute force. it would have rolled all the way to China if he had not caught it.

Given the heat we had a tremendous turnout of TBLA members with spouses, dogs, food, and drink. The game was sloppy but fun, we met a few members that most of us had never met before, Jrock, Taylor, Court and I think most everyone had a good time. We'd like to do it again, though sometime in Sept might be to soon. 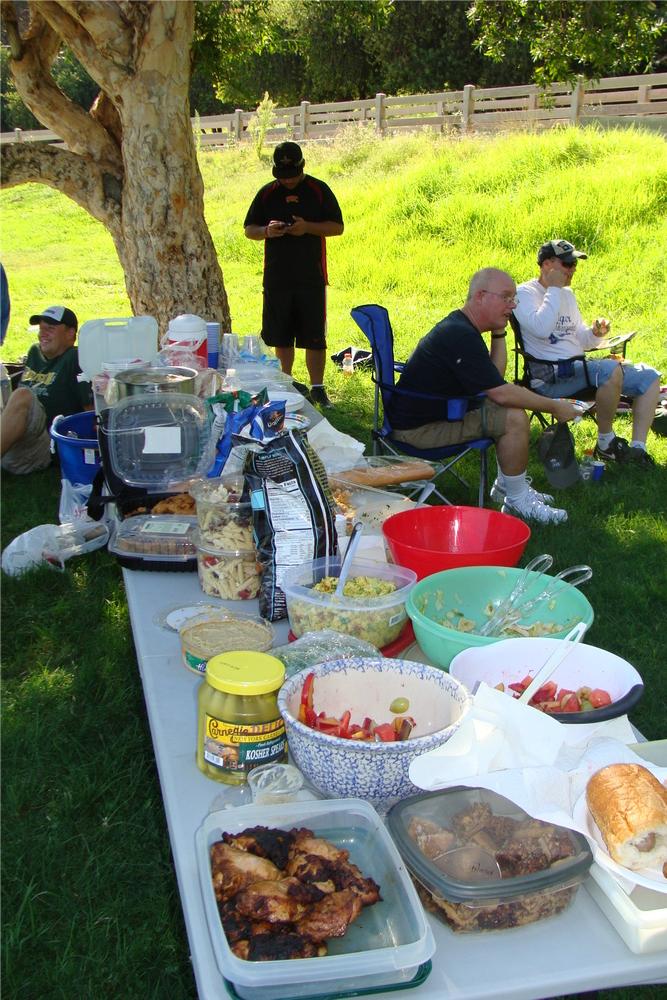 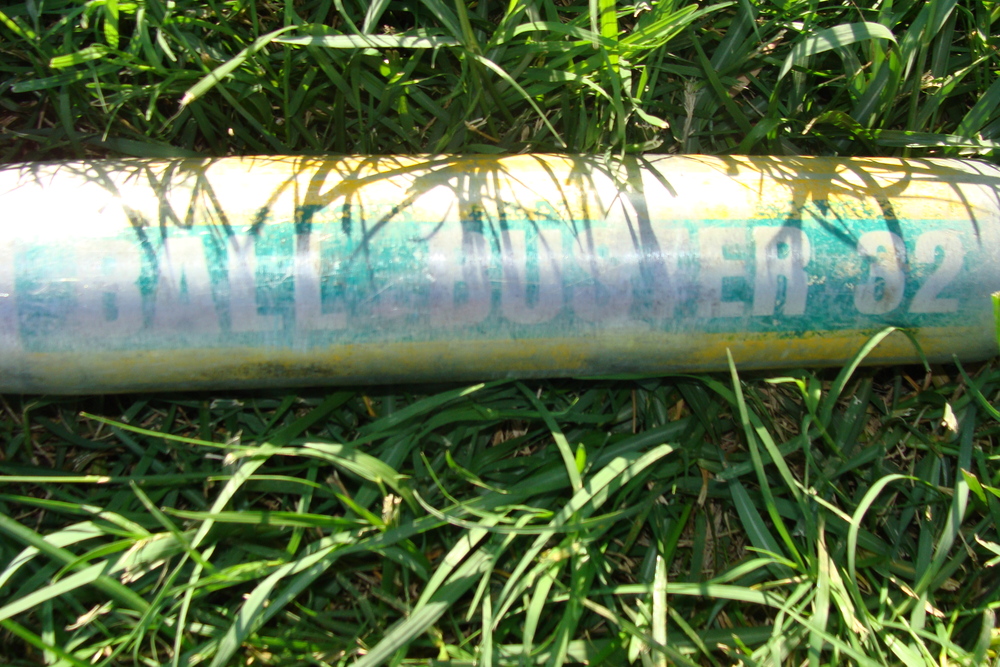 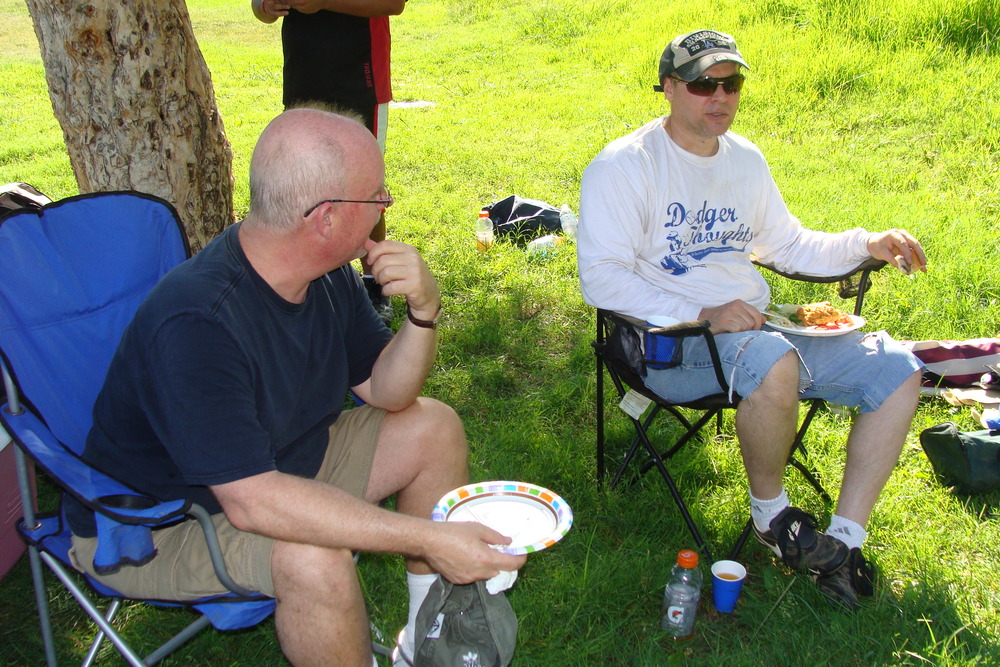 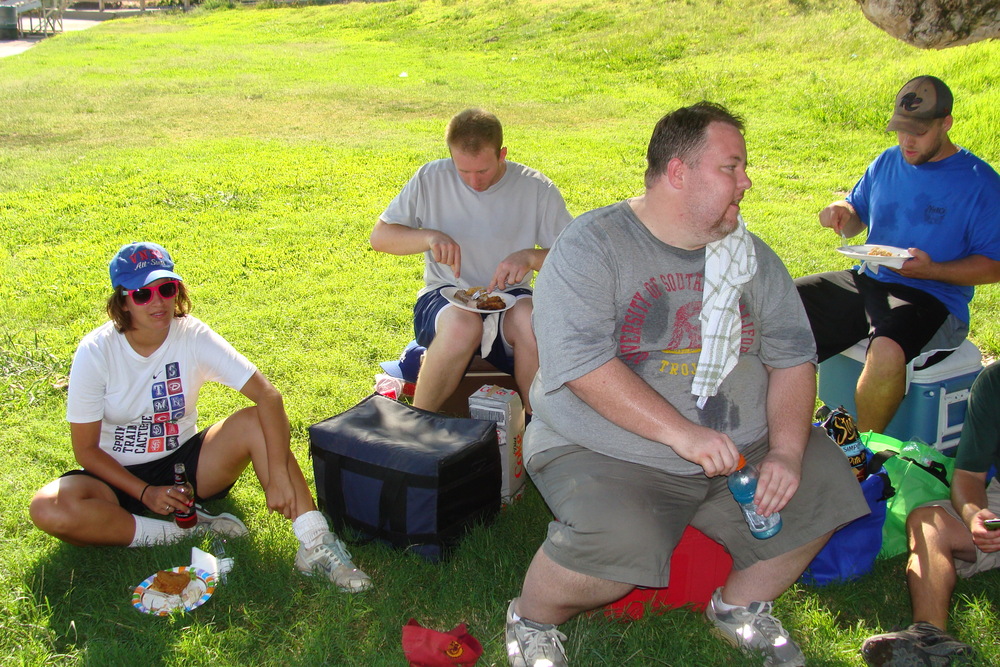 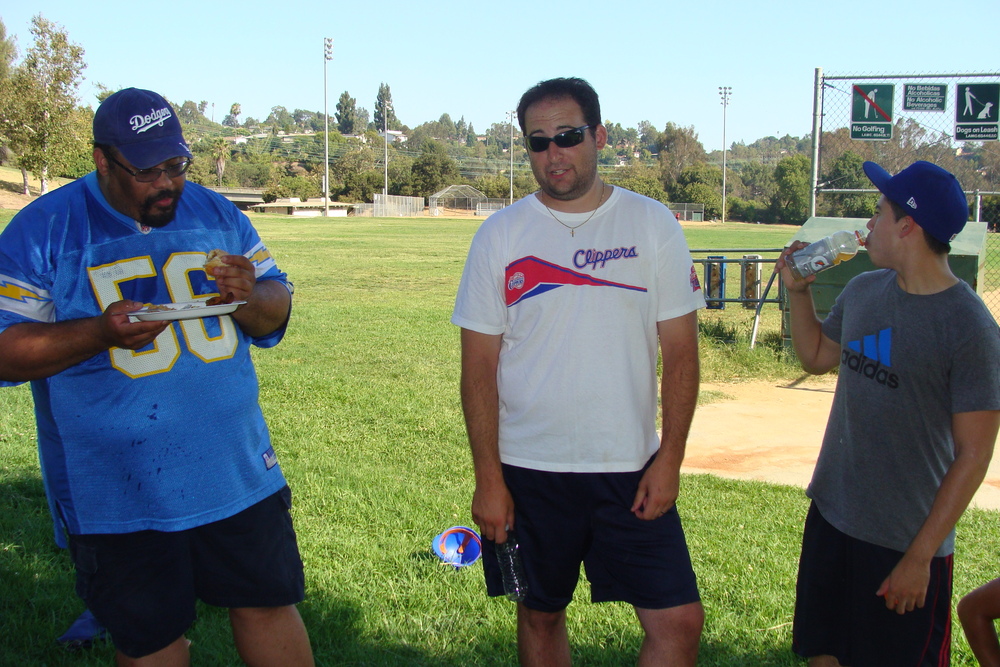 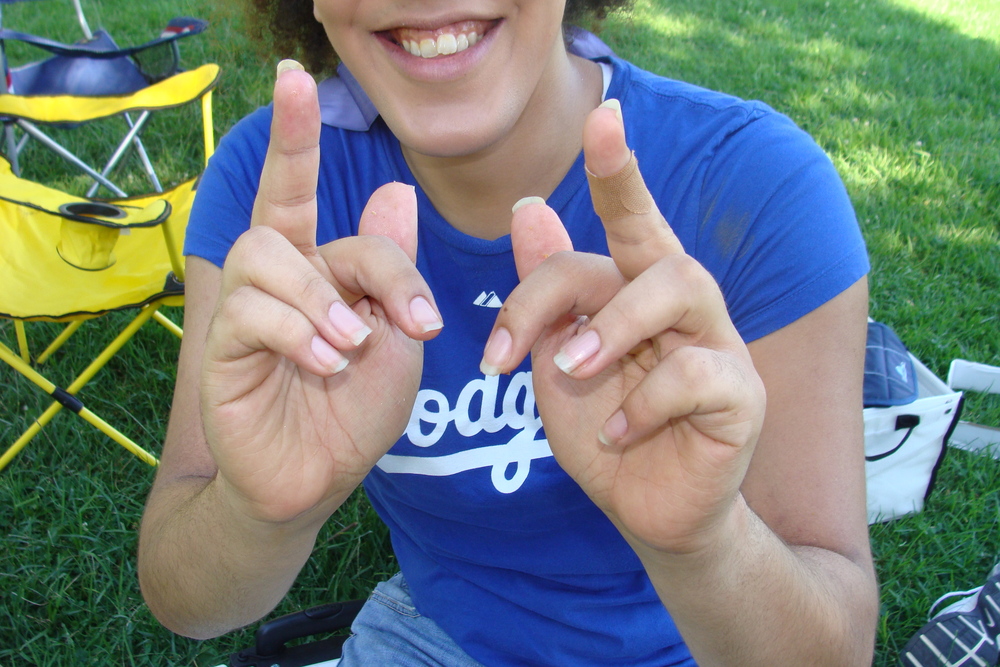 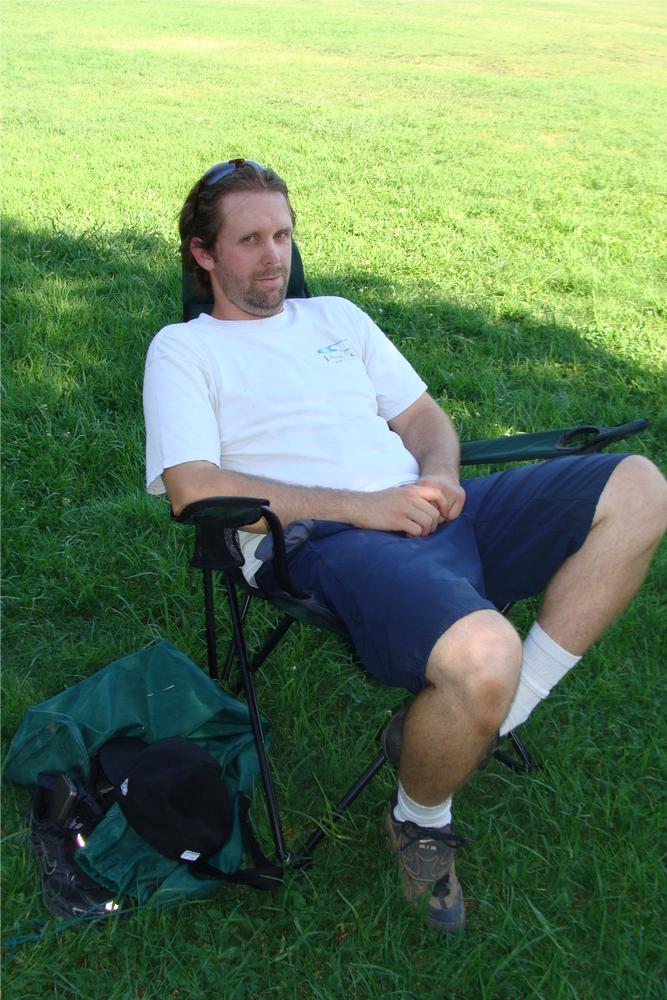 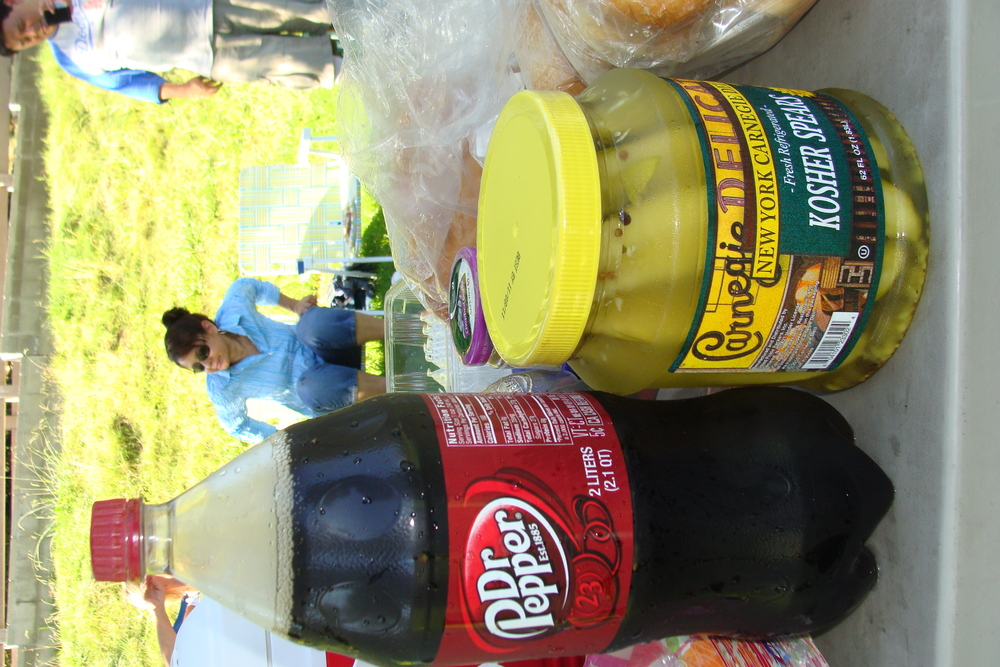