Kuroda Walks Out A Winner, Matt Kemp An MVP

Share All sharing options for: Kuroda Walks Out A Winner, Matt Kemp An MVP

Hiroki Kuroda threw seven-plus innings in an economical 92 pitches and scattered five hits, notching his 13th win in what may be the last start of his career in Dodger Stadium, as the Los Angeles Dodgers defeated the San Francisco Giants 8-2. Kuroda's only blemishes were two solo home runs, to Carlos Beltran in the first inning and Pablo "Let THEM Eat Cake" Sandoval in the seventh.

Last home game of the year! Hope 2 c everybody out at the stadium 2nite. Let's end the season wit a bang!

Well, Kemp banged out three doubles in his first four at-bats and made a nice diving catch in center field as he continued his stretch run in his MVP candidacy. Then, like a well-crafted pyrotechnics show, he saved the biggest bang for last, capping off his evening by launching a towering, two-run, moon-shot home run to dead center field in the eight inning off mop-up man Barry Zito. Four-for-five, 1 HR (36 for the year), 3 doubles (31), 3 runs (109), 2 RBIs (118), raising his batting average to .326. That will get it done. 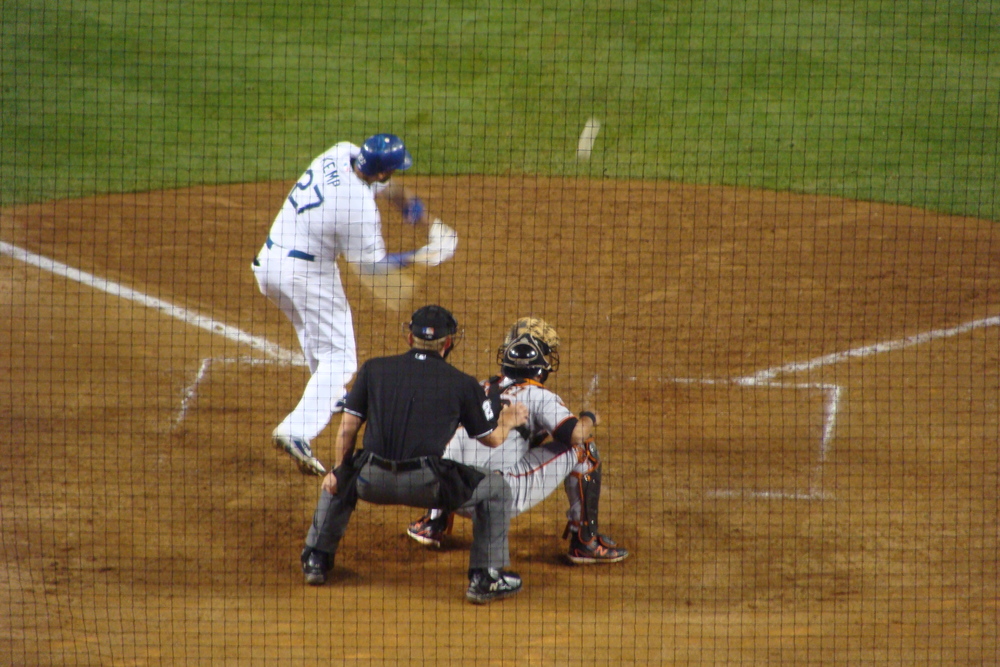 Matt Kemp is about to rocket this ball into orbit. (Photo by David Young)

After the game, Kemp said that it was a "memorable night" made "even more special with his mom sitting in the front row" while he feasted at the dish.

Kuroda departed after allowing a leadoff single in the eighth inning. Kenley Jansen entered and after walking pinch-hitter Pat Burrell, ended the inning with a strikeout, a harmless fly to center and a popout to end the threat. Scott Elbert pitched a scoreless ninth to seal the series win for the Dodgers over the Giants.

Juan Rivera gave the Dodgers a lead they would never relinquish when he blasted a two-run homer into the left-field pavilion following Kemp's two-out, first-inning double. Los Angeles also enjoyed a two-run inning in the fifth when three straight walks off two Giants' relievers forced in Kemp who had, what else, doubled to lead off the inning, and Jamey Carroll knocked in the other run with a fielder's choice grounder.

The Dodgers conclude their season with a six-game road trip to San Diego and Arizona.