Hiroki Kuroda got off to a horrific start on Monday against the Nationals, allowing three home runs to the first five batters he faced. The Dodgers were never able to recover and lost 7-2 in the opener of a four-game series in Washington DC.

Ian Desmond greeted Kuroda with a home run to begin the bottom of the first inning, and he was followed by a single by Rick Ankiel. Ryan Zimmerman followed with what looked like another home run, but it was caught on the warning track by Tony Gwynn Jr., just in front of the left field wall. Before Kuroda was able to breathe a sigh of relief however, Mike Morse and Jayson Werth took him deep for a 4-1 lead.

Kuroda had never allowed three home runs in any start before today's game, let alone any one inning.

Per the Prime Ticket broadcast, the last time the Dodgers allowed three home runs in the first inning was June 25, 1988 in Cincinnati against the Reds. Fernando Valenzuela was pulled with two outs in the opening frame after allowing four runs on those three taters, hit by Barry Larkin, Eric Davis, and Paul O'Neill. The Dodgers did come back to win that game, 6-4.

Unfortunately, the Dodgers could not repeat that comeback performance on Monday.

Kuroda tried another slider in the sixth inning, and Morse took him deep for his second home run of the game. In his six innings of work, Kuroda threw 13 total sliders. Eight were called balls, three were deposited in the seats, and two more were hit for singles. It's safe to say Kuroda didn't have command of that pitch on Labor Day.

The last Dodgers pitcher to allow four home runs in a game was D.J. Houlton on August 29, 2005. In fact, in the last 34 years only 14 Dodgers have allowed four circuit clouts in one contest, including Kuroda today.

All in all, it was an odd day for Kuroda, who doubled his career high in home runs allowed in a game, but also walked nobody and set a new season high was nine strikeouts. The last pitcher to allow four or more home runs and strikeout at least nine in the same game was Josh Beckett for Boston on May 18, 2008. The last pitcher to do it with no walks was David Wells of the White Sox on May 11, 2001.

My brother Greg was at today's game in Washington DC, and took some photos:

Here is a shot of the entrance to the park: 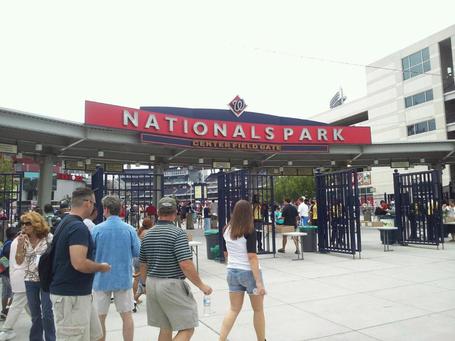 And a view from the right field seats: 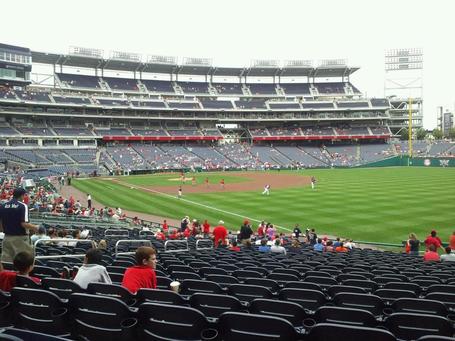