A CamelBack run for Eric

Share All sharing options for: A CamelBack run for Eric 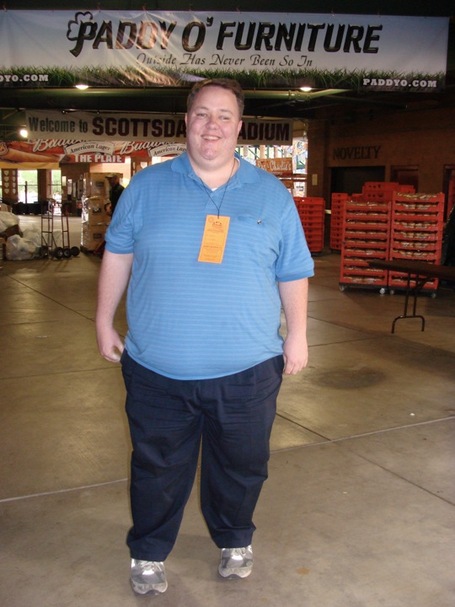 We break into your normal programming to bring you this breaking news:

Hard working TrueBlueLA and SBNation Los Angeles Editor Eric Stephen is going to Arizona this spring and he could use new clothes to rep TrueBlueLa in style.

We are over 5,000 members strong and before you spend that tax rebate money on clothes for your kids, food for your family, or food banks, we need you to consider spending some money on yourself. And by yourself I mean Eric. It has been a dry winter, but you all remember how Eric does the pregame show, in - game moderation, post game shows. How he leaves his home every weekend to cover the Dodgers and get the best quotes and in house information. You all remember that, but this year we need to get him to Camelback to cover the team like it has never been covered before.

This is not your normal telethon, we have some of the greatest TBLA characters on the phones right now to take your donations.

So call 1-888-TRUEBLA and make a donation after talking to the commentator of your choice:

The Midnight to Eight AM Shift has some of our best talent:

Gary - as Gary has humbly told us he can tell if someone is a prospect or not simply by watching how they wash their hands. He'll be heading to Camelback himself this spring, ask him which prospect you want him to keep an eye on in the restroom and for the right price, he'll report back to you personally. He has other talents, if you want Gary to put a fastball into someones earhole he's also the man for that. Also can help in the marketing world. Don't ask him about him doing dishes after a layover.

BHSportsGuy - you need a recipe, he's your man. Be prepared have your tomato paste on hand.

Hollywood Joe - the most interesting man on TrueBlueLA can give you an adventure no matter the subject. Surfing, Woman, Food, Wine, Outsourcing. He's your man

Humma - You want him to make fun of himself or give you a clever limerick? He's multi faceted and and will deliver the goods while drinking gin in one hand and handling/manipulating the speaker phone with the other hand. And by speaker phone I don't mean speaker phone.

NoLander - has an opinion about everything, even sports he does not like or pay attention too. He can help with any gadget questions provided it was not created by Apple.

Silverwidow - you want an overhyped prospect in any sport that will become yesterdays news before yesterday comes. He's your man.

Michael White - will answer any Clipper or basketball question, or for the whack jobs, he will answer questions about the WAC

Brandon - you'd think he'd answer any prospect questions but he asked if we could set it up so he does not have to answer any questions. After ranking 200 players he is soooooooo tired of Dodger prospects, so instead ask about exciting audit stuff, you know the stuff gives auditors the woody's they are world renowned for.

This all day telethon continues from 8:00 AM - Noon with our next group. Remember all these folk are giving their time freely to raise money for Eric's Camel Back run. Don't let them down.

Tommy Blackjack - I have no idea why he is on the phones, the only thing I know about Tommy is that he works in Pet Insurance and hates Dr. Pepper. Who would ask him anything?

USCChris - Let Chris give you three thoughts, one will be outrageous, one will be an apology, and he will end with more outrageous thought to top the first one. We call that the Triple Sundae

Delias Man - you need someone to hate, he can hate for you. That is worth it's weight in gold

Court##### - maybe he can tell you why he's a PHD candidate and has such a lame moniker. You have a question about music, he should be able to answer it, if not let's dial it up a notch and have him transfer you to,...........

Berkowitz - crusty dude who looks exactly like a music professor should look. Eventually Court### will morph into him.

Josie - another scholar who can take your movie, music, team uniforms, cultural questions or any number of subjects. Just don't ask her about soccer, she doesn't even know when the National team plays Italy. If you have a soccer question I suggest you wake up earlier and ask USCChris.

Maddz - you want to talk Theology at the highest level, she is your girl. I'm not sure if there is anything Maddz does not know some answer too, yet I'm sure if she does not know the answer the bulldog will find it for you. At some point I think she has applied to every college in America and now beyond so maybe you have a college question.

Mintxcore - you want to know how to be a snob, he's the man who can answer that question

Underdog - can either tell you why to be optimistic no matter how this shithole season is shaping up, or he can simply match anyone on the Internet for movie reviews and trivia.

Tired of the high brow or optimistic poo pa, and want some low brow entertainment? We have the group for you.

David Young - he may be a rocket scientist but at his heart he's a Chatsworth kid who knows the industry in and outs better then anyone.

ElCamino - making a rare appearance, this ole bugger has the info on the right beer no matter the circumstance

Joey Joe - ask him why he visits us, we all want to know

Mleadman - derelict misanthrope who can answer any question about where to eat. I may have used misanthrope wrong but it was going to be used at some point today and this is where it was randomly inserted. Deal with it. Call Marty

Regfairfeld - You like someone, ask Reg and he'll let you know how much he sucks and why.

That is it, we don't have many "nice" members.

Get off your duffs, make the call, get Eric to Camelback in style.

And thanks for reading because without you there would still be a TrueBlueLA, just a lot less irritating.