Should Hanley Ramirez play shortstop or third base?

The Dodgers plan to play Hanley Ramirez at shortstop in 2013. Are they making the right decision?

Share All sharing options for: Should Hanley Ramirez play shortstop or third base?

Should Hanley Ramirez play shortstop or third base for the Dodgers in 2013? It’s a question that seems likely to linger for much of the season, well beyond the point at which the Dodgers have to commit to playing the 29-year-old enigma at one of those two positions.

The word thus far from the team is that Ramirez wants to play shortstop and will be given every opportunity to keep the shortstop job in spring training, but both general manager Ned Colletti and field manager Don Mattingly have said that Ramirez’s defense at the position needs to improve. Ramirez is currently playing winter ball in the Dominican Republic with that goal in mind, but one wonders just how much difference a few weeks of winter ball are going to make in the defensive skills of a player who has played 7,667 major league innings at shortstop without showing any consistent signs of progress.

The Dodgers’ theory seems to be that since Ramirez spent the last two months of the 2011 season on the disabled list and the first four months of the 2012 season playing third base for the Marlins, thus going a calendar year between starts at the position, what they saw down the stretch was a rusty shortstop, not a bad one. That’s a very optimistic take given the state of Ramirez’s defense at shortstop prior to that year away from the position. 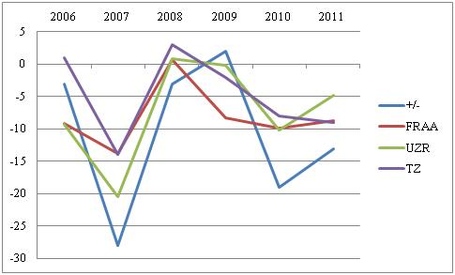 Despite the expected divergence in each individual season, there’s a clear pattern here that the four systems generally agree upon. Ramirez was below average in 2006, awful in 2007, recovered in 2008 and 2009, with the former being his best season in the field according to all but the Fielding Bible, then regressed significantly in 2010 and was not meaningfully better in 2011 (remember, runs saved is a cumulative measure and Ramirez made just 86 starts in the field in 2011). Here’s that data gain, but plotted along a single line representing his average runs saved above (well, below, actually) average weighing all four systems equally. 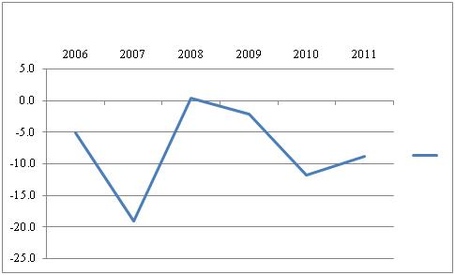 Despite playing 886 games and 7,667 innings at shortstop in the major leagues from 2006 to 2011, Ramirez only managed to grade out as average across those four systems once in six seasons cost his team roughly a win in the field in each of his last two seasons at the position. The green UZR line in the top graph correlates particularly well to the average line above, and per UZR/150, a rate stat which measures how many runs above or below average a fielder would be over 150 games, the quality of Ramirez’s play at shortstop for the Dodgers in 2012 (-10.0 UZR/150) was identical to the quality of his play at the position for the Marlins in 2011 (-10.2 URZ/150) and effectively the same as his full-season performance in 2010 (-12.4 UZR/150 and an actual -10.2 UZR over 140 games).

Playing shortstop in winter ball isn’t going to fix that. That’s who Ramirez is in the field. Ramirez’s comment in the latest edition of The Fielding Bible explains it nicely: "Early in his career, Hanley Ramirez was prone to simple mistakes … He’s cut down on the Defensive Misplays and Errors since 2007 … However, he hasn’t covered as much ground in recent seasons, particularly in the 3B/SS hole." Put another way, as a young player, Ramirez was an athletic but erratic shortstop. He was more consistent in 2008 and 2009, but he’s since lost a step. You can see it in his stolen base totals as well. He stole 51 bases in both 2006 and 2007, his age-22 and -23 seasons. In 2012, playing in a similar number of games at the age of 28, he stole 21 at a slightly lower success rate.

Ramirez isn’t going to get better at shortstop, but there’s reason to believe that he wouldn’t be much better at third base, at least not in the short term. Ramirez made just three appearances at third in the minor leagues and didn’t play a major league game at the position until 2012, when the Marlins’ signing Jose Reyes forced Ramirez to move off shortstop. Per UZR, which is a deeply flawed stat but one that is quite effective for the three infield skill positions per the two charts above, Ramirez had a UZR/150 of -8.7 at third base in 2012, meaning he was almost as bad there as he was at shortstop. From what I saw of his play at third this past season, his unfamiliarity with the position and discomfort with the speed with which the ball gets to the fielder at the hot corner undermined whatever gains might have been made by limiting the territory he was required to cover.

Here’s the irony: Playing more shortstop isn’t going to make Hanley Ramirez a better shortstop, but playing more third base could make him a better third baseman. Here’s another one: Soon after the Dodgers play their first exhibition game in late February, Ramirez will leave the team to join the Dominican Republic’s World Baseball Classic entry for whom he’s going to play third base, because Reyes is the shortstop.

That could actually be a tremendous stroke of luck for the Dodgers. They’ll get to see Ramirez play third base in real game situations without giving Ramirez the impression that they’d rather he move to that position. They might find out what the stats tell us, that Ramirez is no better at an unfamiliar position he’s athletic enough to play than a familiar one he’s not. If so, they’ll have an easy explanation to give the fans and analysts who rail that Ramirez shouldn’t be playing shortstop ("did you see him in the WBC?"). Then again, they might find out that the 861 innings and 215 chances he had at the position last year made a difference and that he’s more comfortable at the position than he was a year ago (remember, he only played eight games at third for the Dodgers after being acquired in late July).

Either way, Dodgers fans might want to root hard for the Dominican Republic in the WBC in March. We know what Ramirez can do at shortstop, but the more we can see of him at third base, the more the Dodgers can determine where he best fits in their infield. As for how their infield best fits around Hanley, I’ll be back later in the week with a look at that.

Cliff Corcoran is one of SBN’s Designated Columnists. His work also appears at SI.com. Follow him at @cliffcorcoran.