John Ely had a memorable run with the Dodgers

For over a month in 2010, Ely was the best pitcher on the Dodgers' staff.

Share All sharing options for: John Ely had a memorable run with the Dodgers

The Dodgers bid farewell to pitcher John Ely on Wednesday, dealing the pitcher to the Astros for lefty Rob Rasmussen. While the transaction was relatively, and literally, minor, Ely's mark on the Dodgers was more indelible than most.

Ely came to the Dodgers from the White Sox with Jon Link on Dec. 15, 2009. The Dodgers sent the sunk cost of Juan Pierre to Chicago, with the White Sox paying $8.5 million of the $18.5 million left on the contract. Anything the Dodgers got out of the two pitchers would have been icing on the cake, and for a while that cake was sweet.

Injuries struck the Dodgers rotation early in 2010, and Ely was summoned from Triple-A at the end of April. He made his major league debut on Apr. 28 at Citi Field, and took the loss by giving up five runs in six innings.

Nine days later Ely made his next start and was much better, as he allowed one run in 6⅓ innings against the Brewers. A blown save by Jonathan Broxton cost Ely his first major league win, but his start was still memorable. With seven strikeouts and no walks, Ely was just the seventh LA Dodger to issue no walks in either his first or second start of his career.

Ely won three starts in a row, and Ely went three full starts and 89 consecutive batters without issuing a walk, and Ely Mania was alive and well in Los Angeles:

I have reached the point of irrational exuberance regarding John Ely. I don't care that he is a 24-year old who doesn't hit 90 on the gun, and who never started above Double A before this season. The dude just throws strikes! Ely has gone 84 batters without issuing a walk, or an extra-base hit. In his last three starts, Ely has 21 strikeouts and no walks in 19 2/3 innings.

Since 1952, there have been two pitchers in baseball who pitched at least six innings without walking a batter three times in their first four career games: Ross Grimsley, in 1971, and Ely.

Ely followed his three straight wins with a pair of strong outings in no-decisions, as he allowed one total run in 14⅓ innings. Manager Joe Torre at the time joked, "As Yogi [Berra] likes to say, [Ely's] making himself necessary."

Ely had a six-start stretch that saw him give up eight total runs, with 33 strikeouts and just five walks in 40 innings. After seven major league starts, Ely had six quality starts, a 3-2 record, a stellar 2.54 ERA, to go with 37 strikeouts and eight walks in 46 innings.

His performance inspired one of the great Photoshopped images ever, from @FLA_Dodger: 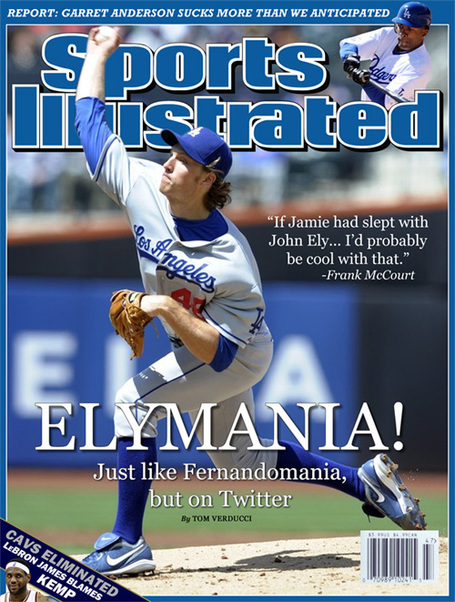 But then things started to head south for Ely, who started to lose some of his early pinpoint control. After allowing no home runs in his first seven starts, Ely allowed six long balls in his next three starts, including two losses, and 12 home runs in 11 starts for the rest of the year. In his final 11 starts, Ely regressed to an 8.00 ERA, with 39 strikeouts and 32 walks in 54 innings.

What Torre called "a defensive approach" to pitching hurt Ely in the second half of 2010, and it carried over into 2011.

Ely didn't pitch much in the major leagues in 2011, with just one start and four relief appearances for the Dodgers, and in 25 starts with Triple-A Albuquerque put up a 5.99 ERA. Sure, it was the hitter friendly Pacific Coast League, but that was simply a bad year.

At the end of the season Ely was removed from the 40-man roster and outrighted to Triple-A Albuquerque, putting the then 25-year old pitcher at a career crossroads.

But Ely found something that worked in 2012, and turned everything around. Ely challenged hitters again, found some semblance of control, and it showed. He won the pitching triple crown in the PCL, going 14-7 with a 3.20 ERA and 165 strikeouts in 27 starts for the Isotopes. He was named the PCL Pitcher of the Year, and won the Branch Rickey Award as the Dodgers minor league pitcher of the year.

Chris Jackson covered Ely for most of the last three years for the Albuquerque Examiner, tweeted, "if every Dodgers minor-league pitcher worked as hard as he did last year, org would be in much better shape."

That earned Ely a call-up to the Dodgers on Sept. 1 when roster expanded, though he was really only up for depth. The move cost Albuquerque their ace heading into the PCL playoffs, and they were bounced by Omaha. Ely only saw his way into two games with the Dodgers in September, and he lost both of them in relief.

It was an ignoble end to an otherwise great year for Ely, who deserved another chance to start in the majors, somewhere. With roughly 97 starting pitchers signed for 2013, the Dodgers weren't going to give Ely that chance, but they found a spot for him with Houston, who has lost 213 games in the last two seasons.

We often take things for granted in baseball, and when looking at Ely's entire major league body of work — 4-13 with a 5.73 ERA in 115⅓ innings — one might not be impressed. But for a little over a month in 2010, Ely had his prolonged moment in the sun, and for that his Dodger years will be remembered quite fondly.