Share All sharing options for: Josh Lindblom traded to Rangers

The Rangers on Saturday completed their trade of franchise fixture Michael Young to the Phillies (it will be officially official once approved by the commissioner), and the return headed to Texas is a pair of pitchers, Josh Lindblom and Lisalverto Bonilla.

For Lindblom, it is the second time he was traded in just over four months. He was sent by the Dodgers to the Phillies on July 31 in the trade for Shane Victorino. For Lindblom the news came on the day of his annual charity game night in his hometown of Lafayette, Indiana. Too bad the giveaway bags were already packed: 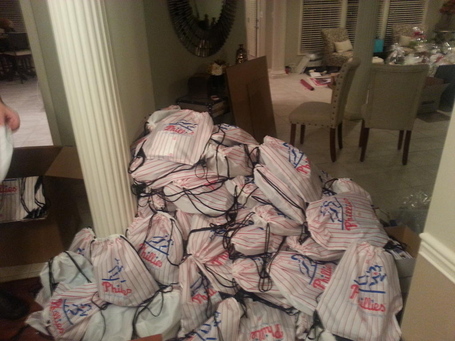 But Lindblom isn't the only former Dodger in the news of late.