The big guns were busy today, as four of the five Dodgers starting pitchers threw bullpen sessions on Sunday. Clayton Kershaw, who skipped his first bullpen session on Wednesday as a precaution with tightness in his back, threw his second bullpen session today. Manager Don Mattingly said Kershaw was not yet 100% but at the same time he is not worried about his ace.

"It's still something we'll have to pay attention to. Nobody has really turned him loose to let it go so he's still trying to hold back a little bit. But it's not anything that has slowed him down or kept him from throwing at all," Mattingly said on Sunday.

Kershaw was in the same group as Chad Billingsley, Ted Lilly, Aaron Harang, and Mike MacDougal. Here are a couple videos of that session, one wide shot showing all five pitchers and one close shot focused on Billingsley and Kershaw (my apologies for the shakiness of the videos).

For the later sessions, Mattingly stepped in the batters box for a few pitches to get a feel for his pitching staff. 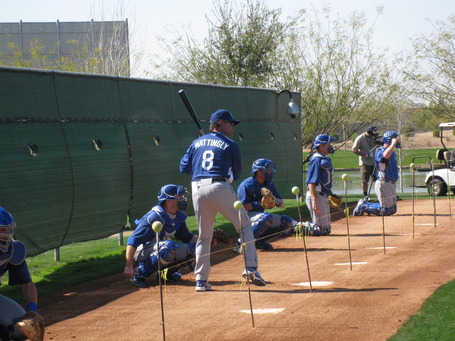 "Guys in general are nervous when I'm in there. If I get up there toward the plate, they kid of miss and don't really let it go," Mattingly said. "I just want to get a view of what their ball looks like or if they have any deception or how they are getting people out."

Earlier in the day, Maury Wills was giving bunting instruction to the catchers

And the pitchers worked on pickoff moves on Field 6:

Here are some more pictures from today: 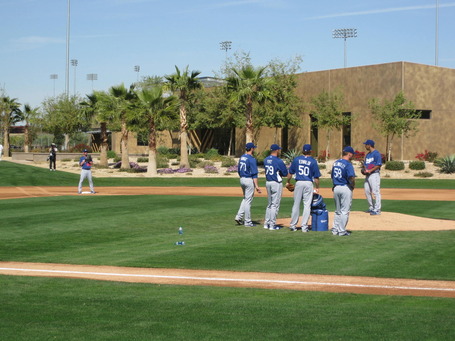 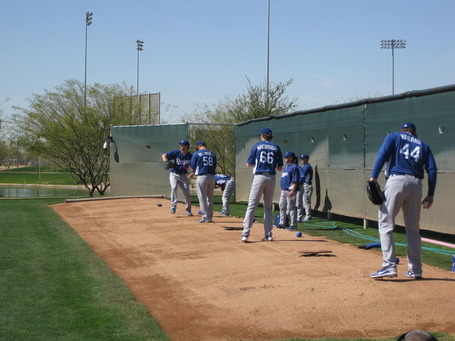 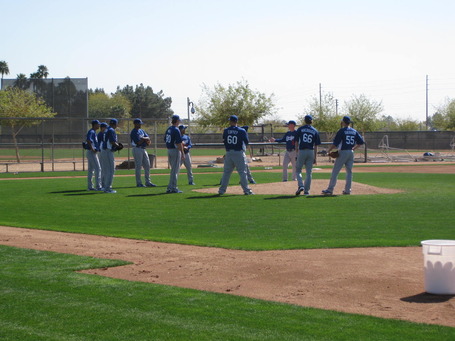