We continue our tour of spring training stadiums in Arizona with a trip to Tempe, home of Diablo Stadium and the Angels. Of all the Cactus League ballparks, Diablo Stadium is the furthest south, roughly 26 miles from Camelback Ranch.

Maybe it is because the Angels are quite a draw with Albert Pujols new to the team, or perhaps it is the lack of access roads to the stadium, but I would recommend arriving early if you can, as traffic can get pretty nasty on both 48th Street and Alameda Drive.

Tempe Diablo Stadium was the first spring home of the Seattle Mariners, until they struck a deal with Peoria for the 1993 season. Tempe lured the Angels from Mesa (and Palm Springs) by refurbishing the place, and the Angels have been in Tempe for now 20 years.

Stadium capacity is listed at 9,558, but there were 9,619 announced on Monday so perhaps that has changed slightly. Tickets range from $10 to $40, and parking is $5. For $40, you get into something called the "Sweet Spot," and all-inclusive ticket in right field on the second level that has open table seating with food included (alcohol is separate).

The third base clubhouse, now the visiting clubhouse, used to be the home clubhouse when Seattle was the home team, and it is roughly the size of a water closet. The Angels clubhouse on the first base side is much larger, which is generally the norm for spring training stadiums. The Dodgers have now been in the third base dugout in four of their five stadiums so far this spring, including their home at Camelback Ranch. 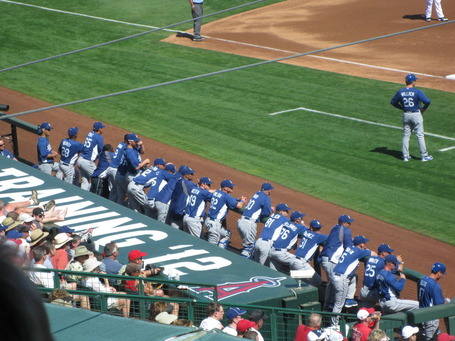 Unless you have a preferred pass, you will most likely park just beyond right and center field, where you can see this billboard, also visible from Interstate 10 just beyond the parking lot. 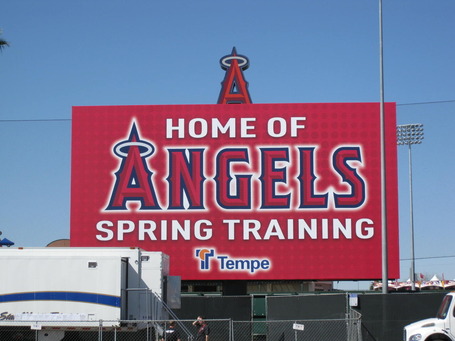 While walking from the parking lot to the stadium entrance, you will notice the rules and regulations for the park. 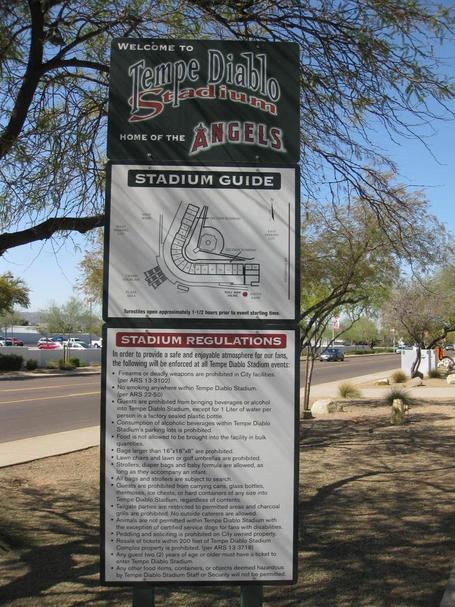 On your way to the home plate gate there is the ticket office. 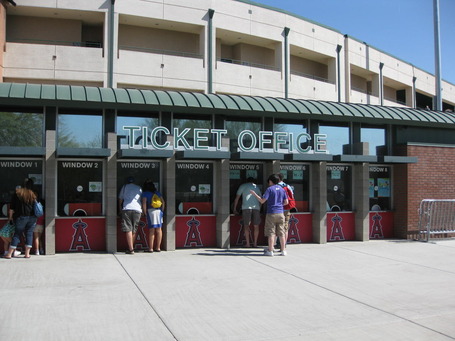 From the entrance to the stadium, you can turn around and see get a nice view of the main Angels practice field. 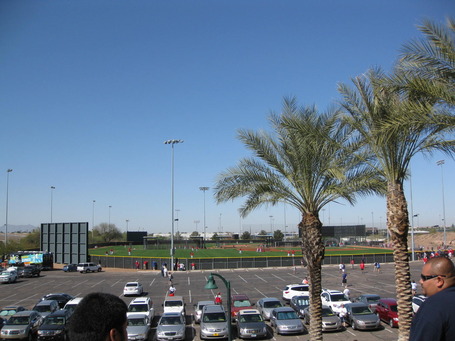 Once in the stadium there is a lineup white board behind home plate. 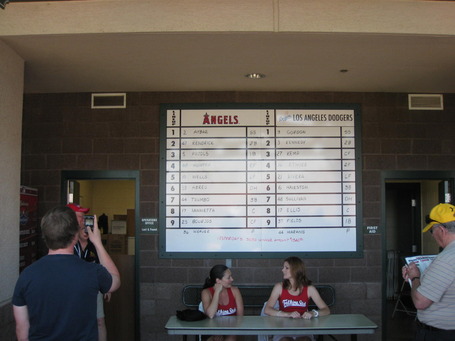 But if you turn around you get this view of the stadium. 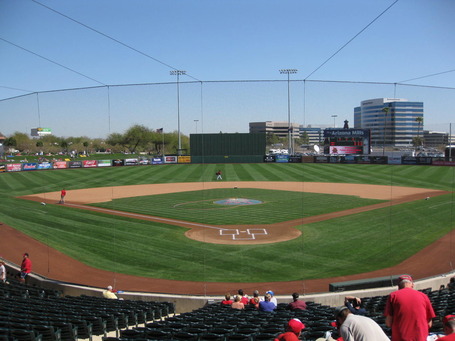 Here is the scoreboard , which is in right field (that is Interstate 10 in the background, as well as the University of Phoenix); the scoreboard is on the other side of the Angels billboard seen above... 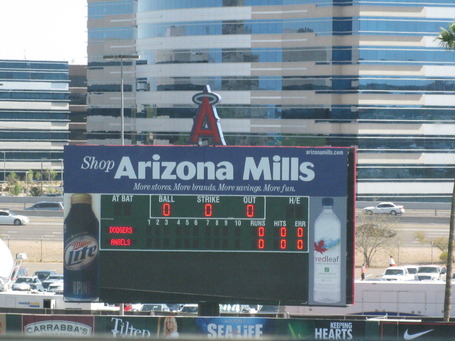 ...because in left field there is grass seating behind the wall in both fair and foul territory. 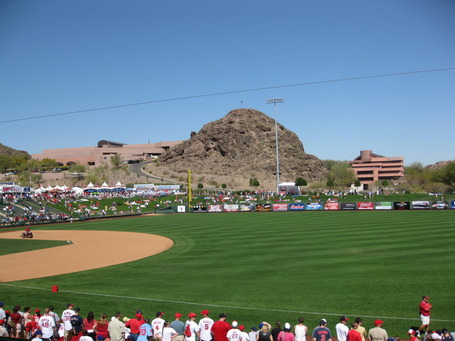 The concourses are actually kind of small and can get crowded quickly, especially between first and third base. 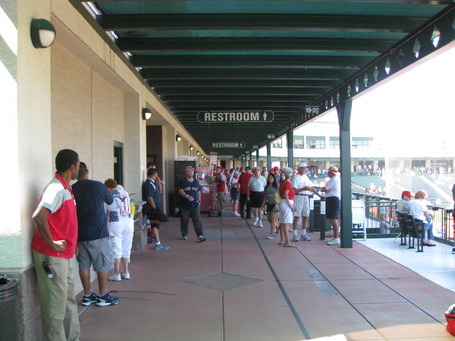 Down the line in right field there is a shaded area with several dining options.... 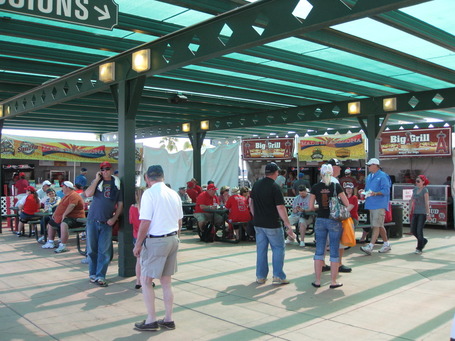 ...but in left field you can bask in the sun in a generally more wide open area... 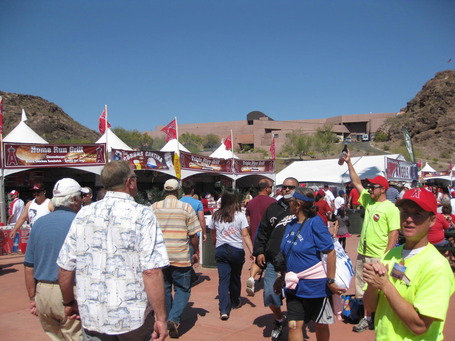 ...with several options as well... 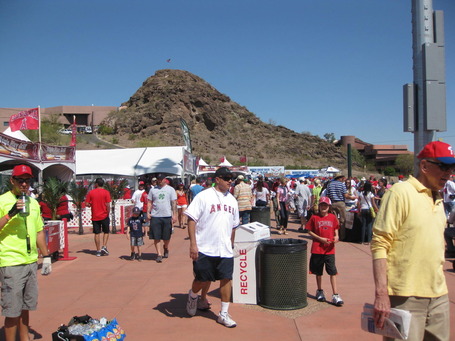 Here is your standard concession stand at Tempe Diablo Stadium... 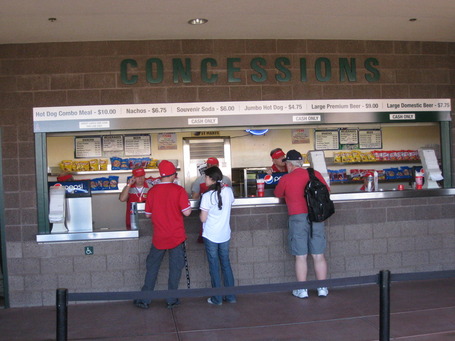 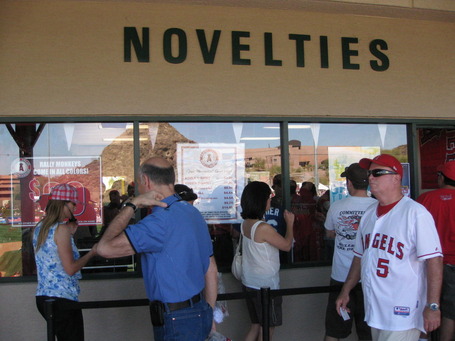 Here is a view of the boxes from right field, which doesn't quite capture them all, though it does show the press box, on the far right.... 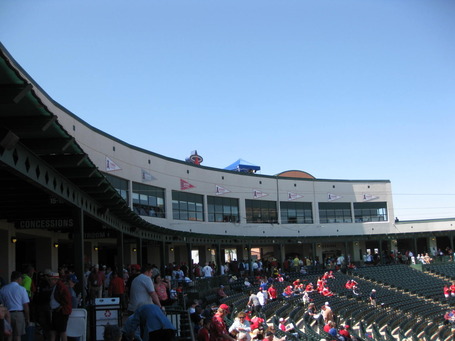 ...and here is a better view of the boxes, from left field... 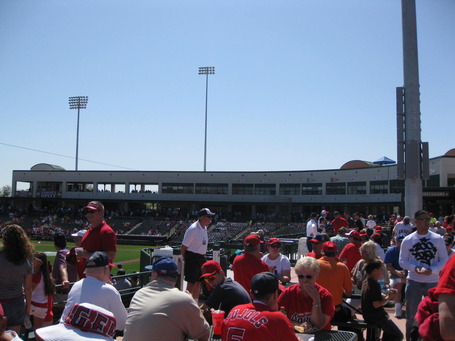 Here is another view of the field from the first base side. 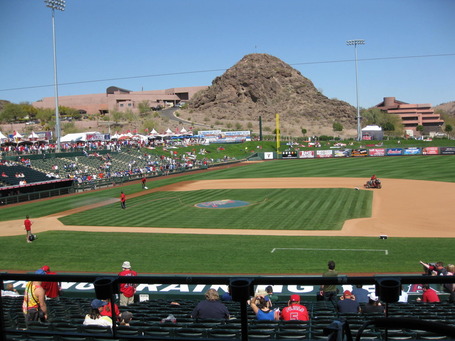 Feeling tired from a long day of baseball? What better place to end the day than at this suggestion, from the right field wall in Tempe: 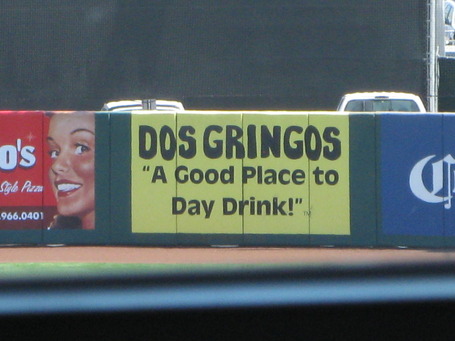