Dodgers Triple Their Pleasure In Yet Another Win

Share All sharing options for: Dodgers Triple Their Pleasure In Yet Another Win

I don't know how they did it, but the Dodgers are somehow 9-1. Dee Gordon's walk-off single capped a wild ninth inning that had a bizarre triple play in the top of the inning that may or may not have been legitimate. The bottom of the inning included a Juan Uribe sacrifice bunt. More details later, but wow.

The Dodgers honored Jackie Robinson Day before the game with former greats Don Newcombe, a former teammate of Robinson, and Tommy Davis, who signed with the Dodgers after receiving a call from Robinson, throwing out ceremonial first pitches. 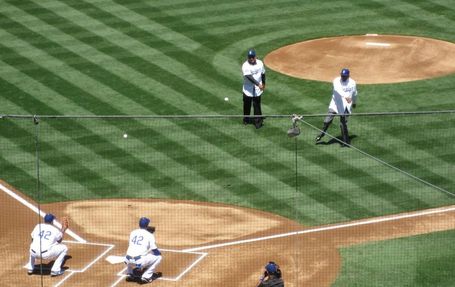 Matt Kemp continued his assault on the laws of probability and reason with yet another home run, his fourth of the weekend series and sixth in seven games against the Padres this season. Kemp is now hitting a sublime .487/.523/1.026 with six home runs and 16 RBI through 10 games.

It has become so absurd with Kemp that he actually got a single in the sixth inning that caused his slugging percentage to go down.

The only time Kemp was retired came on a rather bizarre play in the bottom of the eighth inning. With Mark Ellis at first base, Kemp hit a hard grounder up the middle for what looked to be his fourth hit of the day, only Orlando Hudson was covering second base at that exact spot and was able to tag Ellis and throw to first base to get Kemp.

Clayton Kershaw wasn't his sharpest, allowing eight hits, but through five innings had only allowed one unearned run. Up to that point, Kershaw had one walk in 15 innings this season, but he issued three walks to five batters in the top of the sixth. A potential inning-ending double play ball off the bat of Orlando Hudson was hit to Dee Gordon at shortstop, but the ball bounced off Gordon's glove into left field and was somehow scored a hit rather than Gordon's second error of the day.

Josh Lindblom came in to relieve Kershaw after 5 1/3 innings, and was greeted by a long, 10-pitch battle with Jeremy Hermida. The pinch hitter fouled off seven pitches before serving a game-tying two-run single to left field.

The Dodgers swept a homestand for the first time since a 6-0 run against San Francisco and Colorado to begin the 2009 campaign. The Dodgers won their first 13 home games that season (until a certain slugger got suspended for 50 games); this year's squad has won their first six home games and have won seven straight and 10 of 11 games at Dodger Stadium dating back to last season.

But the best part about Sunday's game was that Vin Scully was back to call it. That makes everything official.