My plan this year is to do a quick fan's scouting report for every opposing pitcher the Dodgers are scheduled to go up against this year. Probable Pitchers is taken from MLB.com with help from fangraphs, baseball-reference, youtube and my own experience. I hope you enjoy.

The season kicks off in San Diego as the Dodgers take on the Padres. This four game stretch should certainly be a fun one to watch. 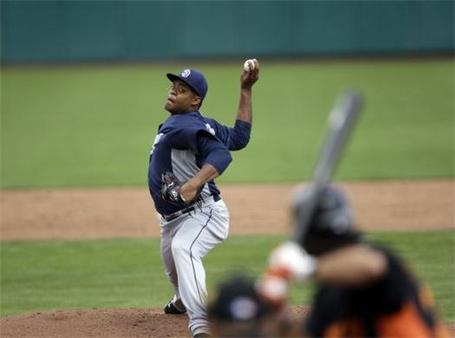 Part of the trade that sent Mat Latos to the Reds and Yasmani Grandal and Yonder Alonso to the Padres, Volquez has a four pitch repertoire, but doesn't have a primary pitch. Traditionally, pitchers throw a fastball roughly 70% of the time and work their offspeed pitches off of that. Volquez throws a 93mph four seam fastball only 35% of the time while using a changeup (26%), cutter (21%) and sinker (17%). His last good year was 2008 with the Reds, and that year he threw his fastball 60% of the time and didn't use a sinker. I'm not sure if using a sinker was in response to his well-known lack of command or his arm surgery in 2009. Now two years removed from surgery and with a new team, I expect the Padres to push him back towards his fastball use of 2008 to see if he can regain some control and success.

Want to know why Volquez has control problems? Take a look at the picture above. Volquez has already landed, but his lower body has yet to open up and his arm is way the hell behind his head. In order to get to the proper release point, Volquez is going to have to take an arm path that is much shorter than desired which typically leads to inconsistent mechanics. It's also not hard to see how someone who throws as hard as he does but uses those mechanics would end up hurting himself.

What Does This Mean?: It means Dodger hitters are going to have to be especially patient, especially the first time through the order. Volquez also has a history of being significantly less effective in the first inning, so if the Dodgers can put a couple runs on the board early, it could be smooth sailing for the reigning NL Cy Young Award winner. I expect Andre Ethier to have a big game, and I expect Matt Kemp and Juan Uribe to struggle against a right-handed pitcher who utilizes many offspeed pitches. However, if Volquez is struggling with his control, we could see some sinkers left up in the zone for our hitters to pounce on. 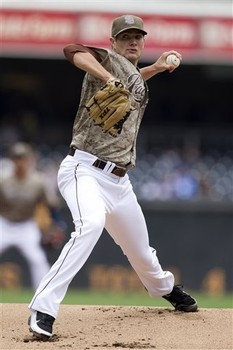 Coming off a breakout 2011 season that saw him strike out over a batter per inning while limiting his walks, Luebke uses two primary pitches to keep hitters off balance. He features a 91 mph fastball that can reach 94, and a slider that sits in the low-80's. Luebke prefers to work his fastball away from both right and left handed hitters. However, he'll throw his slider predominantly inside to righties, preferring to start it at the hitter and work it towards the inside corner, but mostly as a backdoor pitch to lefties. One thing to keep a lookout for, his changeup, while not a primary pitch, is something he uses to keep right handed hitters off balance but refuses to throw it to lefties. Luebke threw exactly 0 changeups to lefties in 2010 and only four in 2011.

You can see that compared to Volquez, Luebke has a much smoother delivery and is in a better position to deliver an accurate pitch. His shoulders are more in line with his elbows as he prepares to accelerate towards the plate, and his back knee is beginning to drive forward and push his front side open whereas Volquez opens his front hip first and lets his back legs just kind of come through.

What Does This Mean?: Watch for Luebke to attack the strike zone against the Dodgers. Ethier and Loney should both struggle against his slider, but if he leaves a fastball over the plate both should be ready to pounce. Expect Juan Rivera to have a good game against this two-pitch lefty. 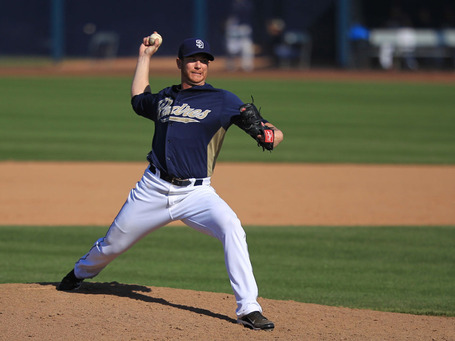 Now 30 years old, Moseley has gone from the Angels to the Yankees and finally found a home with the Padres. Petco Park seems to have saved this fly ball pitcher from himself. Always a victim of the long ball, Moseley rarely strikes anyone out but also has been pretty good at limiting walks over his career. Surprisingly, the home runs he's allowed in his career are pretty evenly distributed between him being ahead or behind in the count. In the last two years, Moseley has added a sinker and cutter while ditching his four seam fastball. He lives in the high 80's with his sinker, high 70's with his curveball (thrown 21% of the time), high 80's with his cutter (21%) and will mix in an 82mph changeup once in awhile.

This is really a great photo of Moseley. He's in excellent position to deliver a strike on this pitch as his upper body is square and his lower body is in line with his shoulders. His front side is a little ahead of his back half which robs him of some velocity, but it's a nice, smooth delivery that allows him to throw the ball where he wants.

What Does This Mean?: Because of his lack of velocity, Moseley lives away from both righties and lefties. Expect to see a lot of balls out over the plate. This should play right into Matt Kemp's power. Dee should also have fun against Moseley since he won't have to worry about a fastball beating him. 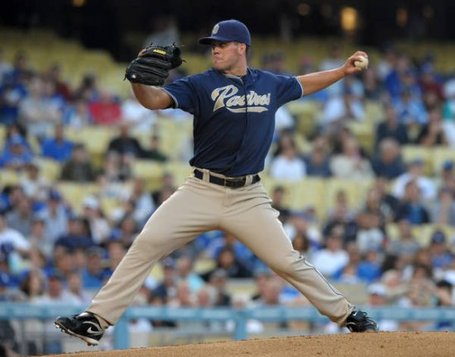 Clayton Richard is yet another Padres starting pitcher who walks too many guys and doesn't strike out enough of them. Over the last four years, Richard has thrown his four seamer less and less, now relying on a two seamer 46% of the time and four seamer 13% of the time. Oddly, both pitches are thrown at 90mph so it's possible Pitch f/x just has a hard time telling the two apart. His main offspeed pitches are an 83mph changeup he throws 15% of the time and an 84mph slider he throws 21% of the time. He tends to throw his two and four seam fastballs to righties but not much at all to lefties. Likewise, he completely bags his changeup against lefties, preferring the slider as the offspeed pitch of choice.

You can see in the picture above that Clayton Richard doesn't really get too much bend in his back leg, which will take away a lot of velocity. Ever try jumping without bending your knees? Yeah, it doesn't work. His upper body is under control which will help him be somewhat accurate, but because he's mostly drifting forward with his lower half, he's going to lack a lot of the consistency demanded of a guy who averages 90mph on his fastball.

What Does This Mean?: His changeup and fastballs both have arm-side action, meaning that as a lefty they move into a lefty and away from a righty. Which makes sense considering he doesn't throw as many changeups to lefties. Left-handed hitters are notorious low ball hitters, and a changeup would just drift into their wheelhouse. I expect the lefties to once again struggle with a pitcher who relies on his slider, while the right-handed bats of Kemp, Rivera, and even Uribe could see some success against a guy with Richard's pitch selection and lack of velocity. But as with Luebke, it's going to come down to whether or not Dodger hitters can be patient enough to allow RIchard to work himself into hitter's counts rather than chasing slower pitches with movement and falling into poor contact and low-pitch count innings.

The Padres seem to have accumulated a rotation of soft throwers who don't strike many guys out. Luebke has a little life on his fastball, but nothing overpowering. It's going to be a battle of attrition as the Padres pitchers try to induce poor contact to keep their pitch counts low and go deep into games. If the Dodger hitters can be patient, I see no reason why they can't feast on this Padres pitching staff

Which Padres pitcher do you think will give Dodgers hitters the most trouble?