The Isotopes were the lone winner on Friday night, which brings the Dodgers combined minor league record to 1 and 6. I was at the Quakes game, and watched them lose, but more importantly I was able to capture some pictures and videos that I've posted after the jump.

Minor League Player of the Day – Tim Federowicz - 2 for 4, 1 HR, 2 RBI's, 1 Run. FedEx had a big night on Friday and broke a 2 - 2 tie with a 2-run homer which eventually led to an Albuquerque win. Tim finished the 2011 season on a hot streak for the Isotopes, and so far he seems to have picked up right where the left off.

AAA – After being shutout for 6 innings, the Isotopes exploded for 4 in the 7th and 1 more in the 8th as Albuquerque defeated Omaha Storm Chasers (Royals) 5 to 2 on Friday to even their record at 1. Through 6 innings a Luis Cruz double was the Topes' only extra base hit in the game, but that was forgotten in the 7th when the good guys connected on four extra base hits in a row, starting with another home run for Scott Van Slyke. That was followed by back to back doubles from Trent Oeltjen and Josh Fields, then Tim Federowicz got in on the action with a 2-run shot. Fields added another RBI double in the 8th for good measure, while Cruz finished the night with a team high 3 hits. The one hitter who didn't get in on the fun was Jerry Sands, who still can't find his stroke as he went 0 for 5 with 2 more K's. On the mound, starter Michael Antonini had a solid 5 inning outing in which he allowed just 4 base-runners and gave up just 1 run. His only real mistakes were allowing a triple and a homer to former Dodger Tony Abreu. Will Savage picked up the win despite allowing a run, while Scott Rice recorded the save with a perfect 9th.

AA – There wasn't a whole lot of offensive in Chattanooga on Friday as the Lookouts lost to the Tennessee Smokies (Cubs) 1 to 0. The game featured just one extra base hit, which also resulted in the only run as it was a solo homer off of reliever Blake Johnson. Ethan Martin started the game for Chattanooga and was dealing early on as he accumulated 6 K's in his first 3.1 innings of work. His control problems eventually got the best of him, however, as he didn't make it through the 5th due to 4 walked batters and a pitch count of 90. The good news is that Martin didn't allow any runs and gave up just 3 hits. As I already mentioned Johnson allowed a run in relief, and Steve Ames picked up where the left off last season as he fired two hitless innings. There isn't much to write about on offense as the only highlight was Rafael Ynoa collecting 2 hits and a stolen base for the second night in a row.

HiA – I attended the Quakes game on Friday, but unfortunately I didn't get to see a whole lot of action as Rancho Cucamonga was shutout by the 66ers (Angles) 3 to 0. The one highlight was getting to watch Chris Reed pitch, and even though he allowed 3 runs over 5 innings I came away impressed by his velocity and hit ability to settle down and retire the final 10 batters he faced. I'll have more pictures, video, and notes about the game after the jump. 2011 26th round pick Freddie Cabrera worked 3 innings of relief and didn't allow a run, and neither did Greg Wilborn who pitched the final frame. On offense the Quakes only managed to scatter 5 singles, one of them coming from Leon Landry who subsequently stole 2nd base.

LoA – The Loons opened their season in Lansing on Friday, but unfortunately their 2012 campaign started with a 3 - 2 loss to the Lugnuts (Blue Jays). Great Lakes starting pitcher Jarret Martin had an excellent Dodger debut on the mound, but his defense was his own undoing as he made 3 errors in the field which led to two unearned runs. Otherwise Martin allowed just 2 hits over 5 innings while striking out 6. Juan Noriega came from the bullpen and continued to defy the odds with a couple of shutout innings, but Jose Dominguez gave up the eventual winning run in the 8th. The Loons offense outhit the Lugnuts 7 to 4, but all of the Great Lakes' base knocks were singles. Joe Winker and Pratt Maynard had a pair of hits, while Justin Boudreaux drove in both runs with a based loaded single. One final note is that center fielder James Baldwin left the game in the bottom of the 4th inning, but I have not seen why he was removed from the contest.

Coming up - The Loons have a scheduled double header for the first time in team history, and both Brandon Martinez and Matt Laney will pitch for Great Lakes. 2009 draftees Aaron Miller and Garrett Gould will pitch for the Lookouts and Quakes, respectively, while Stephen Fife will take the mound for the Isotopes.

Follow the jump for videos, pictures, and notes from the Quakes game...

Notes on the Quakes game:

Before I start, let me say that I've heard in the past that the radar gun at the Epicenter was a few MPH slow. I have not yet heard anything about the gun in 2012, so it may or may not have changed. Chris Reed started the game at 90 MPH, then was consistently hitting between 92 - 94 MPH from about the 3rd batter on. His offspeed stuff was usually around 80 MPH. His fastball looked like it popped pretty good in the glove, and he was pretty overpowering throughout his 5 innings. He seemed to get into the most trouble when he started using his off-speed stuff more in then 2nd inning, but after going back to his fastball more he shut the opposition down.

The Dodgers have been aggressive with the 22 year old Freddie Cabrera who was a 26th round pick last year. He got into a jam early, but then really settled down and cruised through his 3 innings of relief. Cabrera's fastball was getting up to 92 MPH on the gun.

Nick Akins looked sloppy in left field as he bobbled a few balls and made a few poor throws. Also, for some reason he was hitting 9th in the lineup. Leon Landry made an outstanding throw from center field in the 1st inning when attempting to nail a runner trying to score from 2nd on a single, but it was just a tad late. Later in the game Landry was involved in a similar play, this time as the runner, but unfortunately he was thrown out.

Michael Pericht is a very big guy, and looks huge behind the plate. Chris Jacobs is also a huge guy, and he looked fine during the warm ups so I'm not sure why he's on the DL.

Unfortunately my videos appear to be too big to upload, but I'll try to figure something out and if I do I'll post them tomorrow. For now, here are a few pictures: 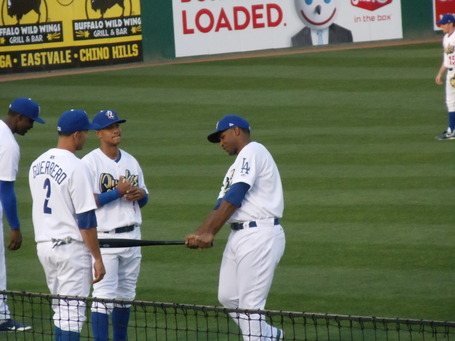 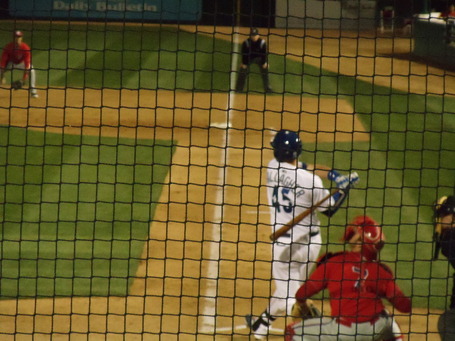 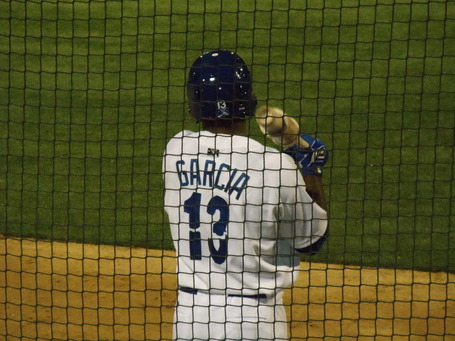