Don Mattingly: 'We Have A Chance To Win This Thing'

Share All sharing options for: Don Mattingly: 'We Have A Chance To Win This Thing'

"When I talked to our guys in spring training, I said we have a chance to win this thing. That's what we're here for. I'm a believer," said manager Don Mattingly on Friday. "I believe in their ability, and what we can accomplish with hard work. I believe in what these guys can do as a group, and the power of guys playing together and all going in one
direction."

The hot start and the six-game division lead gives the Dodgers a little bit of a cushion, which has allowed Mattingly to be patient. Especially with Dee Gordon for instance, the leadoff hitter hitting .218/.258/.282 on the season and in an 0-for-10 slump.

"The good start has really bought us a week," Mattingly said. "The season kind of starts for me every day. We just have to start grinding games out. All you're trying to do for me is get a win tonight, it's that simple. We won't worry about anybody else, but take care of our own business.

"I'm not a guy who's going to say what we can't do. I'm going to talk about what have a chance to do if we play our best baseball, and that's all I look for every day."

Matt Kemp and Andre Ethier have done the heavy lifting on offense, and Mattingly looks to them as leaders to set the tone.

"Donnie reiterated in spring training that you have to change this place starting everywhere," said Ethier, who was 3-for-4 with a home run and a double on Friday. "This organization has expectations on the way the game is to be played, and it starts with us at the top, hustling and showing all the guys down below that this is the way you play when you get up here."

A Gift From Magic

When the Dodgers returned to the clubhouse on Friday after their off day, they all had a nice surprise waiting for them at their lockers. New ownership partner Magic Johnson signed and personalized one of his Lakers jerseys for everyone. 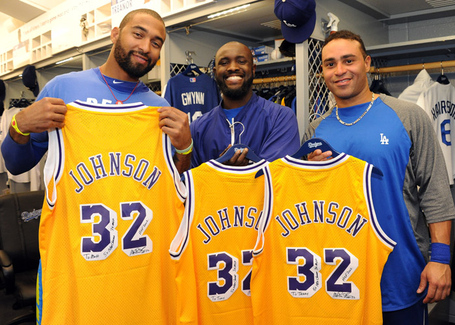 Tony Gwynn Jr. is the biggest Lakers fan in the clubhouse, evident by his smile above. Did Gwynn have any plans for where to display his new prized possession?

"It can go anywhere. I can put it in my car and post it up in the back seat if I wanted to," Gwynn joked. "But I'll find a nice place for it."

Unlike teammates Matt Kemp or Dee Gordon, Gwynn doesn't harbor any delusions about his basketball ability, though he wants to challenge Magic to a 1-on-1 game for another reason.

"I'm not that stupid. I don't think I'm that good," Gwynn said. "But I would challenge him just for the sake of seeing him play in person, but not for any type of bragging rights because I know I'd probably get my butt kicked."

Mattingly got a jersey as well, and the lifelong Larry Bird fan joked that he would switch allegiances to Magic since he never got a jersey from Bird. Though Mattingly did say he has a pair of green Converse Larry Bird high-top shoes that he bought at an auction.

Aaron Harang makes his seventh start of the season for the Dodgers, in search of his second win. Opposing hitters have a .359 on-base percentage so far this season off Harang, though he does lead the starting staff with 8.4 strikeouts per nine innings (32 in 34 1/3 innings).

Rockies starter Juan Nicasio allowed two runs in six innings against the Dodgers at Coors Field on April 30 in a win, beating Harang. Nicasio allowed five runs in 5 2/3 innings in his only career start at Dodger Stadium, which came last July 25 and included a home run by Ethier.