Share All sharing options for: Hey, At Least Parking Is Down To $10

It is sometimes said that baseball is a game of inches, or in some cases several feet. But it doesn't really matter when you give up four home runs. In a game that saw a tie and three lead changes in the final two innings, the Dodgers lost to the Rockies 8-5 on a walk-off home run by Jason Giambi Wednesday afternoon at Coors Field

Carlos Gonzalez homered twice on Wednesday and drove in seven runs in the three-game series. Over his last nine games Gonzalez is hitting .412 with seven home runs, 12 runs scored, and 18 RBI.

It was the first time Clayton Kershaw had allowed three home runs in a game in his career, and Gonzalez became just the second player to hit two home runs off Kershaw in a game, joining Adam Dunn on August 6, 2010.

The second home run for Gonzalez gave the Rockies a 5-3 lead in the bottom of the eighth, a lead that was in question in the top of the ninth with two outs, Adam Kennedy on first base, and Matt Kemp at the plate. Manager Jim Tracy decided to intentionally walk Kemp to get to Dee Gordon, who had entered the game on defense the previous inning.

Gordon, who hit his first career home run on Tuesday, hit a two-run double into the gap to tie the game. The play was helped by an extremely poor relay throw by Troy Tulowitzki that allowed Kemp to score the tying run.

But after the euphoria of tying the game, Jamey Wright walked two to open the bottom of the ninth inning, which set the stage for Scott Elbert to face Giambi with a five-man infield and two outfielders. But Giambi made the position of the fielders not matter by crushing a ball to center for his first home run of the season.

Jerry Hairston Jr. saw both ends of the spectrum on Wednesday.

In the top of the sixth inning with the Dodgers down 2-1 and Juan Rivera on second base, Hairston grounded to third to end the inning. Only Chris Nelson's throw brought Todd Helton off the bag at first base, ever so slightly. Only by a few feet. You be the judge: 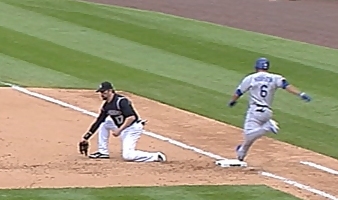 Hairston was called out by first baseman Tim Welke on this play. Manager Don Mattingly argued and was about as animated as he will ever get, but not enough to get thrown out.

Then in the eighth inning, Hairston doubled in two runs to give the Dodgers the lead and his first two RBI of the season. But even though the game was in the top of the eighth inning, and with Kershaw still on the mound, there were still 10 more runs to be scored.

The Dodgers are off Thursday, but Ronald Belisario is expected to be activated from the restricted list during the off day. The Dodgers have to add him to the active roster by Thursday now that his 25-game suspension has been served, or risk losing him. Even if Belisario were to clear waivers, he can decline an assignment to the minor leagues.

On the field, the Dodgers open a three-game series on Friday afternoon at Wrigley Field, the first of three weekend day games against the Chicago Cubs. Chad Billingsley starts the opener for the Dodgers, facing Paul Maholm for Chicago.